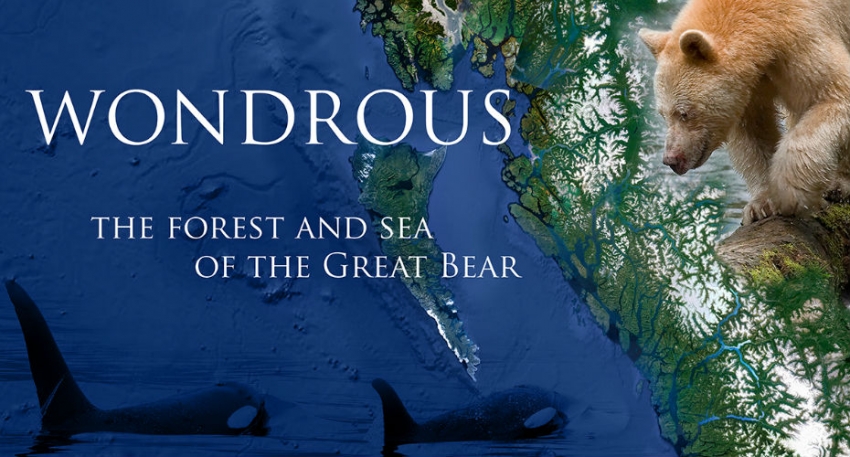 To celebrate the historic Great Bear Rainforest Agreement and to illustrate its wide and complex ecosystem is Wondrous – The Forest and the Sea of the Great Bear by photographer Andrew S. Wright at Science World.

The Great Bear Rainforest is the name coined by environmental groups in the mid-1990s to refer to a remote region of temperate rain forest on the British Columbia coast between Vancouver Island and Southeast Alaska.

In February, after a 20 year battle to protect the region, the B.C. government signed an agreement with First Nations, environmental groups and forest companies promising:

“To protect 85 percent of the region’s old-growth forests, with logging in the remaining 15 percent subject to the most stringent commercial logging standards in North America…the final agreement also recognizes aboriginal rights to shared decision-making and improves economic opportunities for the 26 First Nations that reside in the region with a greater share of timber rights and $15-million from the province.”

To celebrate this historic agreement, and to illustrate a slice of the wide and complex ecosystem that makes up the Great Bear Rainforest, is the exhibit Wondrous – The Forest and the Sea of the Great Bear by photographer Andrew S. Wright at Science World: Telus World of Science.

On display are large-scale photographs - floor to celling - that reveal the depth and beauty of the rainforest, from the species, which inhabit to the painterly scenery in its overwhelming beauty.

Included in the exhibit is a video and sound component, showcasing more of Wright’s photographs, but also depicting other contributors, in addition the sound, which echoes throughout the atrium at Science World providing a cacophony of imagery in and of itself – an authentic soundtrack recorded over a three month period at six separate locations within the rainforest.

Wright wants people to stop and ask questions, to understand that although the area is protected under the new agreement, in the future, there could still be damming effects from industry on the landscape.

“If there’s a statement to be made about Wondrous is it that I hope people will be awed, wowed, and make the connection that perhaps the impact of industry should not be allowed to make its footprint.

We can do better, and there are alternate solutions,” says Wright.

When speaking with Wright about the images chosen for Wondrous, his passion and respect for the land and the animals are evident. A great storyteller, he engages the viewer to ‘dive deeper’ and not just consume the images at face value.

On Wednesday, April 20th, Science World: Telus World of Science will be hosting a free event from 6-8pm, which will provide a chance to view the large-scale photography exhibit and meet with the photographers and hear some of the amazing stories of how these images where captured.

The exhibit runs until April 28th on the first floor Atrium.