#WhatsTheLink is a series about all that TransLink, Metro Vancouver’s transportation authority, is responsible for in the region. Join the conversation on Instagram, Twitter and Facebook, the Buzzer blog, and here, of course.  Post by Robert Willis. 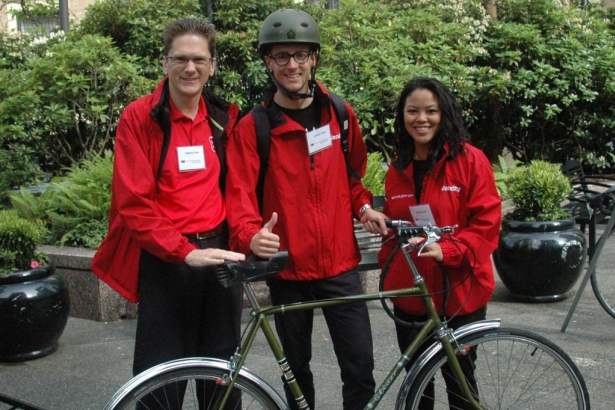 Photos courtesy of TransLink
Do you commute to downtown Vancouver by bike? Think you get to work or school faster on two wheels than by car or transit? Well, there’s a good chance you’re right.

That belief was reinforced to me last week at the kick off to Bike to Work Week. 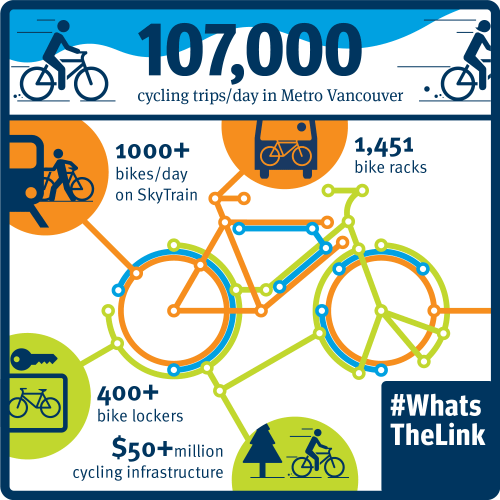 Bike vs transit vs car

The Share the Road Challenge is a friendly competition put on by the good people at HUB. The idea is have teams of three compete against their coworkers to see who can leave from the same location and get to the same location in downtown Vancouver by taking different modes of transportation.

The twelve-odd teams left from locations across Richmond, Vancouver and North Vancouver. Most of the users of cars mentioned traffic, the expense and difficulty of parking. The transit users all said their commutes were good but
sometimes a little short on room. Not surprisingly, the bike riders all loved their commutes and many were surprised at how fast they reached the corner of Howe and Georgia.

One of those teams, alongside TravelSmart and others, was Team Vancity. 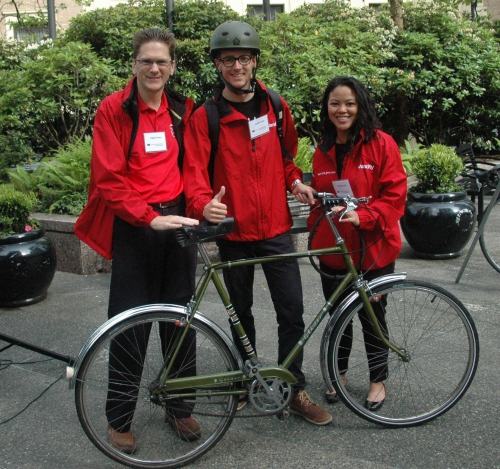 Cycling from their branch on Cambie and 10th, cyclist Johan Eicker took only eight minutes to reach the finish line. He described his ride as “an easy commute. The bike routes were fast and safe.”

Anne Caraan was second and took the Canada Line. “My commute was interesting, I took the same route as I usually do, but in the opposite direction. It seemed longer than my usual commute,” said Ann. She didn’t track her time, but she arrived shortly after Johan and well ahead of her third-place car colleague. Travel time between the two locations on transit is usually five minutes on the Canada Line, with a wait time of a maximum of roughly four minutes plus walking time.

“It took me sixteen minutes. It was very painful, because I don’t usually drive
downtown. I only take SkyTrain downtown... At every intersection, when I had to turn left it seemed to take forever. And then I had to park underground. I was last.”

TransLink is about cycling, transit, cars and much more

Whatever mode of transport we take, we all commute using different modes of transit for different reasons.

TransLink is unique in North America as a transportation authority that links so many ways of moving people and goods. Part of TransLink’s multimodal mandate is to help support the people making the 107,000 bike trips each day in Metro Vancouver.
Read More:
Share on Facebook Share on Twitter