Insights West delves into the minds of  B.C. voters - and the results are intriguing 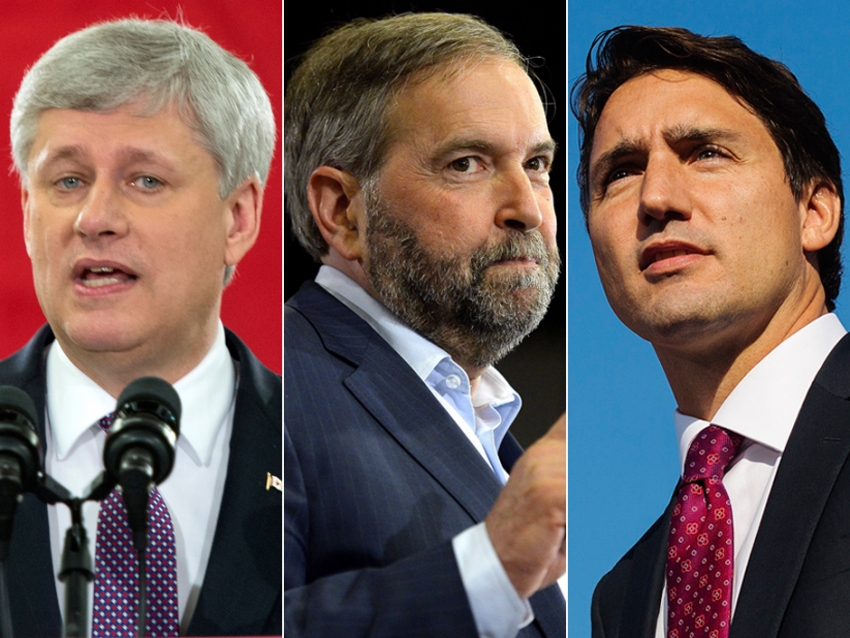 We are past the halfway point of one of the longest federal election campaigns in Canada’s history. We at Insights West felt it was a good time to look at what is motivating voters in British Columbia to support one party or another. While specific positions on health care, job creation and even marijuana are important, there are ultimately six main motivators for a voter to select a specific candidate to support in the 2015 Canada federal election.

Three of the six motivators are primarily political: the party’s leader, the party’s candidate in the riding and the party’s ideas and policies. The three others are purely emotional: desire for stability (which is a must-have for incumbents), desire for change (a coveted trait for the opposition) and disgust with other contending candidates (which usually pushes voters away from traditional choices).

Insights West asked decided voters in British Columbia to rank the importance of each of these six motivators when they assess the candidate they will cast a ballot for in the federal election. The analysis outlines significant differences, and shows the kind of work that the parties will need to do if they hope to get more voters to back them. 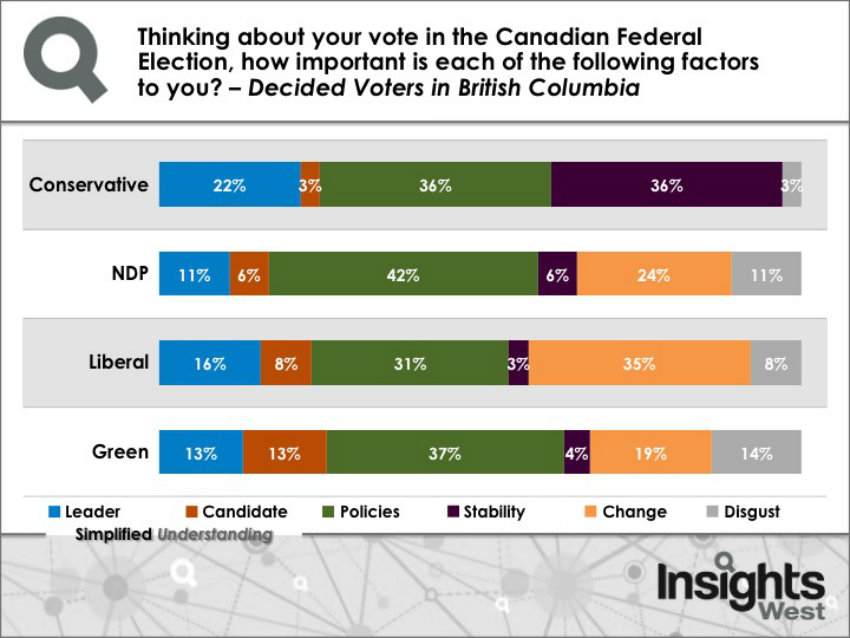 Even though we do not vote directly for our head of government, the effect of the party leader is especially important for incumbents. There is only one person running who has already lived at 24 Sussex as prime minister: Stephen Harper of the Conservative Party. It is not a surprise to see Tory voters placing significantly more emphasis on the party’s leader (22 per cent say it is their main motivator) than those who will cast a ballot for the Liberals (16 per cent), the Greens (13 per cent) or the New Democratic Party (NDP) (11 per cent).

The Party’s Candidate in the Riding

This is one of the least important aspects for most voters, with fewer than one-in-ten Liberals (8 per cent), New Democrats (6 per cent) and Conservatives (3 per cent) saying that the person who represents the party in their riding is their main motivator. The Greens have a significantly higher score (13 per cent), suggesting that they are succeeding in connecting at the riding level, particularly in their stronghold of Vancouver Island.

The Party’s Ideas and Policies

This is where the bulk of the voter score comes from. More than two-in-five NDP voters (42 per cent), and more than a third of Greens (37 per cent) and Conservatives (36 per cent) say their vote is primarily motivated by the ideas and policies of the party they support. The lowest numbers on this motivator are for the Liberal Party (31 per cent). In spite of some suggestions that more independent candidacies would be welcome by Canadians, voters are definitely looking primarily at parties, and not at the men or women who are knocking on their doors.

As expected, Conservative voters give one of their highest ratings to stability (36 per cent, actually tied with “ideas and policies” as the main motivator). Few New Democrats (6 per cent), Greens (4 per cent) or Liberals (3 per cent) say stability is the principal reason for their choice.

The Conservatives score a zero on this question. Not one of them wants change. However, there are some fascinating fluctuations in the opposition. For Liberal Party voters, desire for change is the main motivator (35 per cent, ahead of ideas and policies at 31 per cent). The rating is significantly smaller for New Democrats (24 per cent) and Greens (19 per cent). This suggests that Liberal voters are more inclined to believe that their leader—Justin Trudeau—is better positioned to deliver change than their New Democratic counterparts. For the Greens, change in Ottawa is regarded as a welcome side effect of a collapse in Conservative support, but it is clearly not a priority when selecting a candidate.

Disgust with Other Contending Candidates

Canada’s traditionally governing parties do not score highly on this question (only 3 per cent for Conservatives and 8 per cent for Liberals). The numbers are a little bit higher for the NDP (11 per cent), but reach 14 per cent for the Greens. This is an important aspect to consider as the campaign continues. Roughly one-in-seven Green voters in British Columbia are disgusted with other options. If other parties succeed in swaying these voters, the Greens could drop at the province-wide level.

So, what have we learned? The strength of the Conservatives hinges on a desire for stability (and fear of a different party taking over), policies and ideas, and the performance of their leader. The New Democrats are holding on to a base of support that was there in 2011 through ideas and policies, but their numbers on change are currently low. Conversely, the Liberal voter is motivated by change, but not completely sold on ideas and policies. The Greens are connecting extremely well at the riding level, but some of this support is based on the electorate’s displeasure with what the three other parties are offering.

See more
A Multicultural “Calculation” for the Conservatives
How low can Harper's B.C. numbers go?