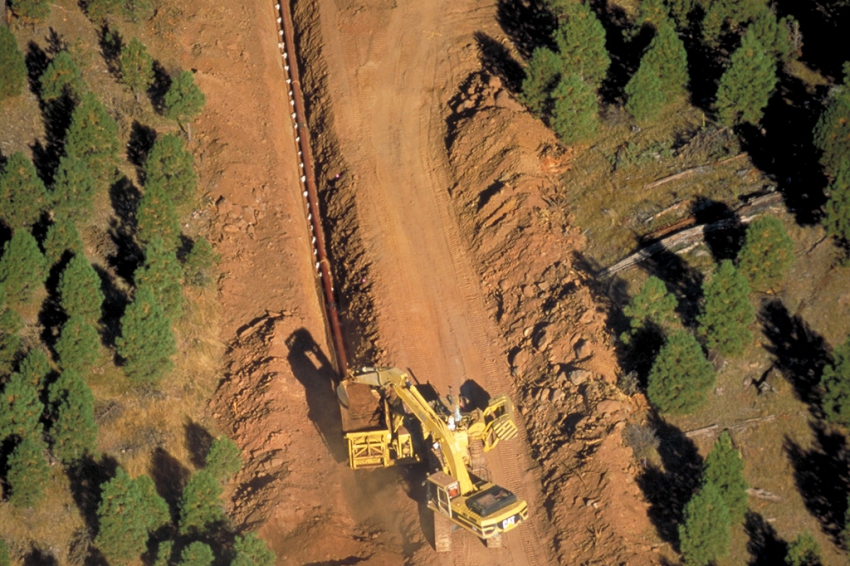 Trouble is, the oil is not flowing on Line 9 yet – and that is likely due to Lanteigne’s research into flaws in the pipeline’s design.

Though Lanteigne is not trained in engineering or law – (she waitresses in cafes for a living) – the citizen investigator has been doggedly researching Enbridge’s Line 9 pipeline for years.

She discovered a “common sense” problem with the project – the lack of the shut-off valves on both sides of waterways, like the Grand River near where she lives.  She applied to speak at the NEB’s oral hearings into the project in London in 2012.  She was one of just 18 interveners.

A much larger number of parties -- 44,000 -- were limited to writing letters of comment.  “Many were form letters,” said the NEB e-mail.

“So I told them, beside major tributaries and flood risk areas, you need two valves to stop the oil from flowing, if the [pipeline] breaks,” said Lanteigne.

“And the board agreed with me.  And that’s why Line 9 isn’t flowing.”

She used MapQuest to report that the driving distance between the valves was 45 minutes.  Using “simple math,” she calculated that Enbridge would have a hard time containing a catastrophic oil spill into the waterway.

A standard spill leak, she told the board, of two percent of the pipe’s volume would release more than 1,000 barrels of oil into the water each hour.

“The day that I received the National Energy Board ruling – I threw up,” laughed Lanteigne.

“I was laughing at the same time because I thought it was so preposterous that it took a housewife to raise that concern to stop the pipe.”

"Since we received the NEB's directive, we've taken a hard look at what we had done technically and how we addressed the condition with the NEB," he said last month, according to the Edmonton Journal.

"It's clear from our second look that we should have done a much better job of explaining our approach to the placement of valves on the route and the NEB I think was right to question us on it."

The NEB would not acknowledge that Lanteigne was one who raised this issue (even though it’s in the transcript), but an enviro-watchdog group that attended the hearing did.

“It is heartening to see just how much impact citizens can have when they get engaged in critically important issues like this,” he added.

Lanteigne is grateful the NEB dealt with her concerns.

“I raised the concern, they acted on it.  But I always wondered in my mind what would’ve happened were I not allowed to say it?”

“I’m concerned how many pipelines are built like this still today.”

The Board did make $200,000 available to assist landowners, Aboriginal groups, incorporated non-industry, not-for-profit organizations, and other interested persons to participate in the regulatory process of the pipeline.

The full NEB e-mail and report disclosed to Lanteigne is shown below.  The NEB managers were blackened out by the Vancouver Observer at the request of the board.  The journalistic questions did not hinge on outing the manager's names, so they were removed as a courtesy.  The grey sections were redacted by federal Access to Information staff. 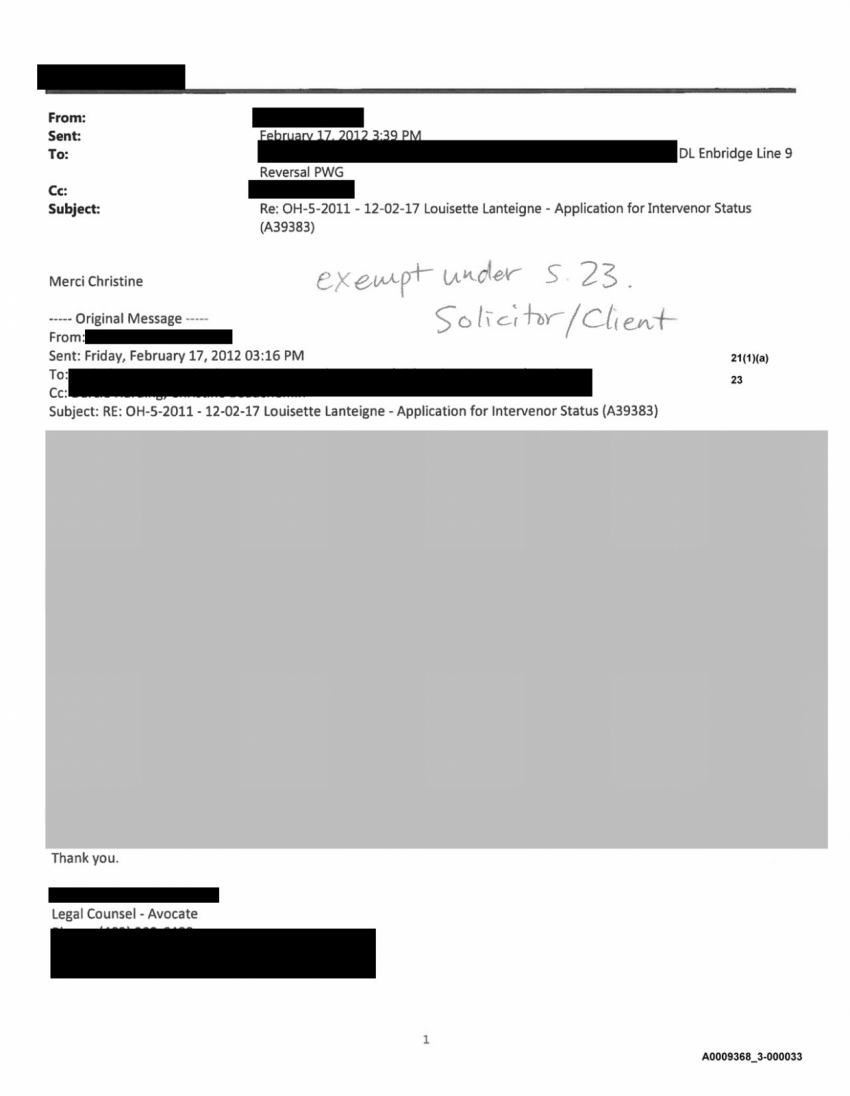 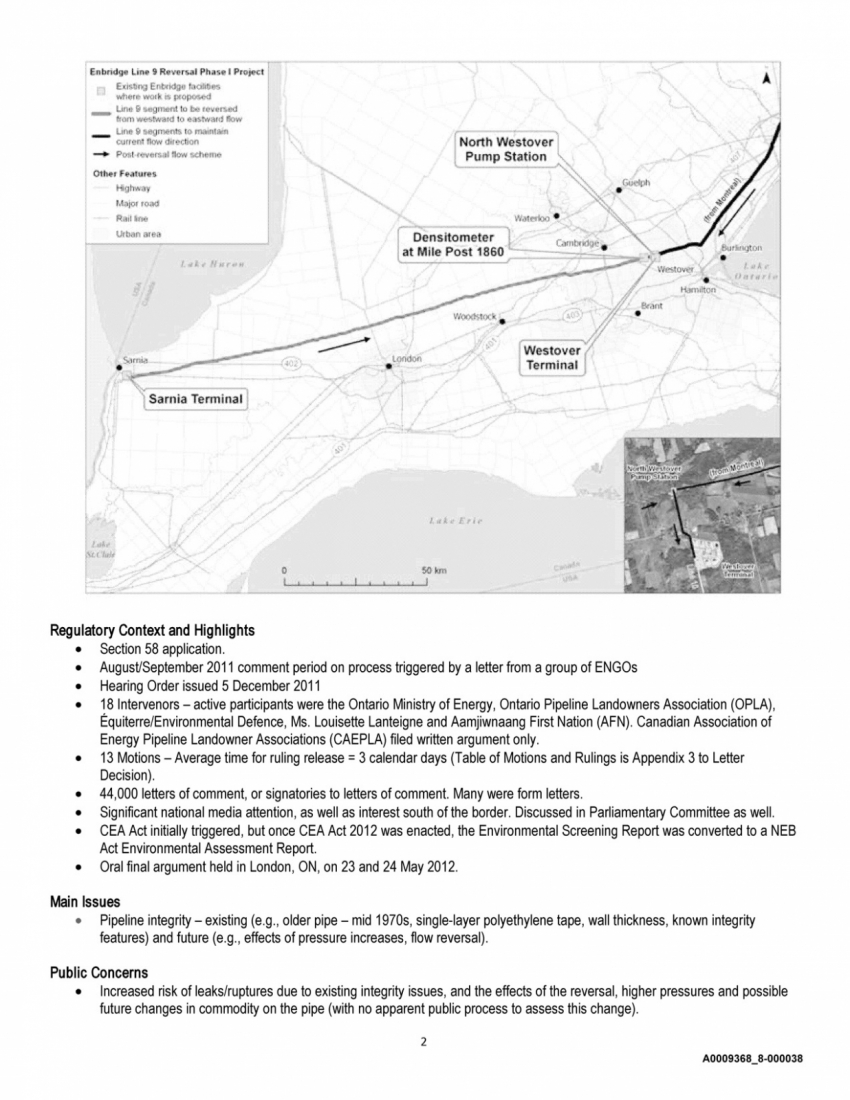 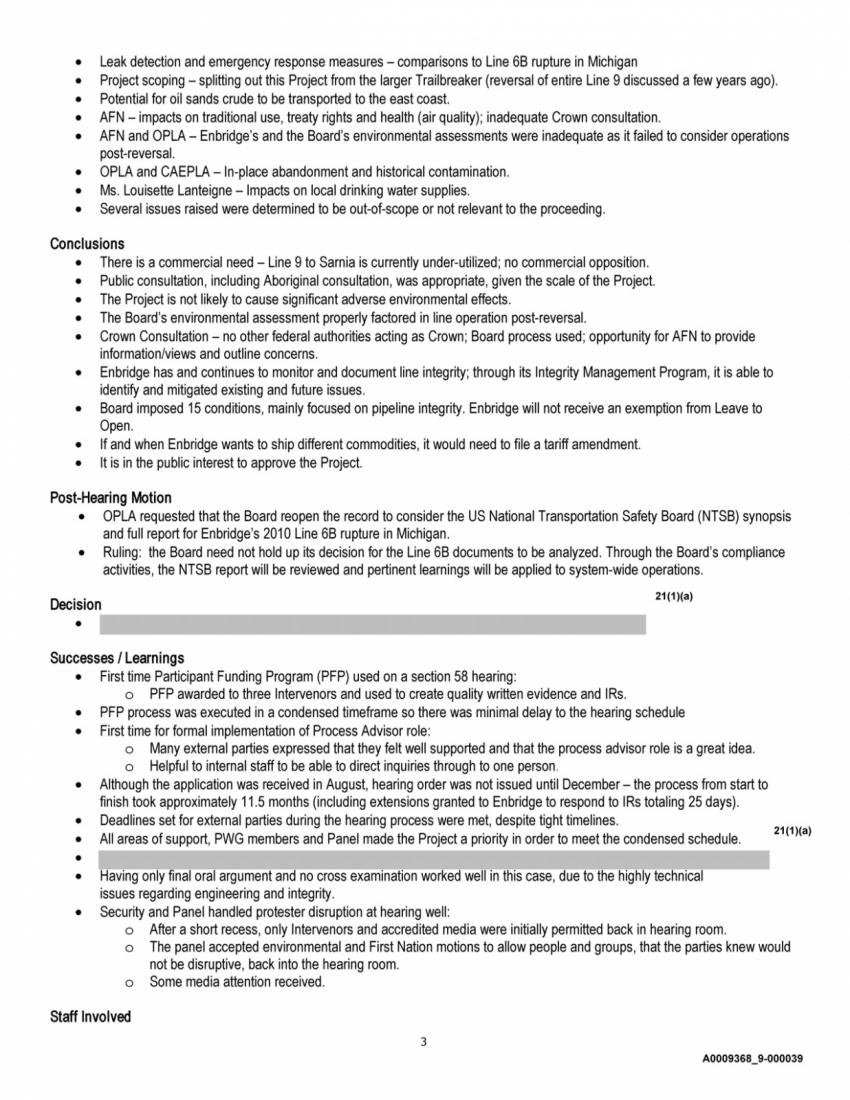