The NDP and Green Party both pledged to restore funding for adult education programs, but the VSB’s appointed trustee is pushing ahead with closing the “Mainstreet” adult education centre at Gladstone Secondary at the end of the month. 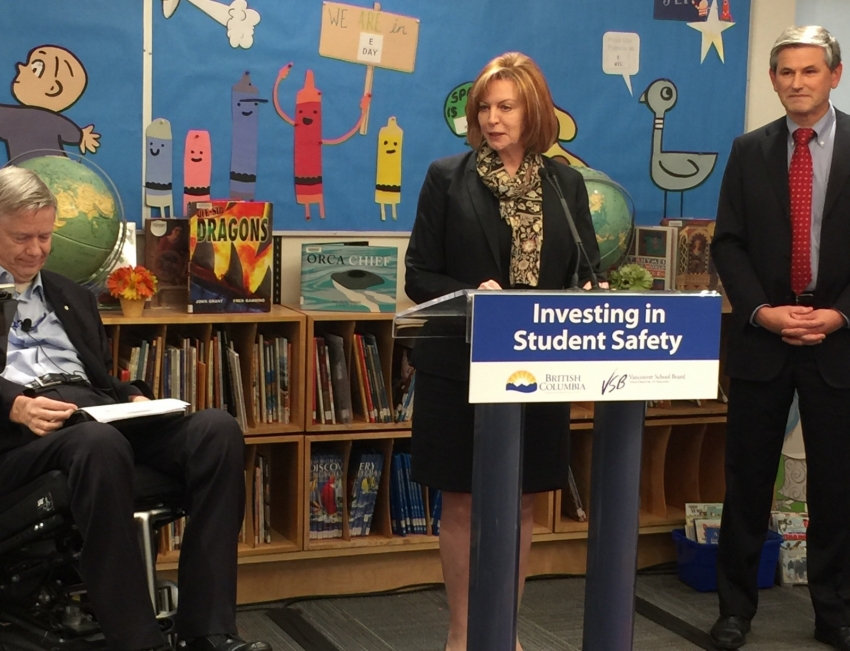 The VSB's appointed trustee, Dianne Turner, pictured here with B.C. Liberal MLA and newly appointed cabinet minister Sam Sullivan (left) and fellow Liberal MLA and newly appointed Attorney General Andrew Wilkinson (right), is moving ahead with her decision to close the Main Street Adult Education Centre, located at Gladstone Secondary. The photo was taken at an event to celebrate the opening the new General Gordon elementary school building. Photo: Patti Bacchus
Note: This column was updated on June 20, 2017 to include a comment from the Vancouver School Board's student trustee.

The Vancouver School Board (VSB), which is governed by a B.C. Liberal-government appointed trustee, is pushing ahead with its plan to close the district’s “Main Street” adult education centre that is located at Gladstone Secondary School. The centre used to be located in leased space near Main Street but was relocated to Gladstone Secondary in 2014 as a cost-saving measure.

The decision to close it came this spring after a significant enrollment drop in adult education courses that followed the B.C. Liberal government’s 2014 decision to cut funding for students who have graduated but still need to upgrade or complete high-school courses.

During the recent provincial election campaign, the B.C. NDP and the B.C. Green Party promised to restore that funding. With NDP leader John Horgan poised to become premier with support from the B.C. Green Party, a VSB spokesperson confirmed this week the appointed trustee, Dianne Turner, is not backing down on her decision to close the adult education centre at the end of this month.

He said the B.C. Liberals have no majority and no mandate to continue “attacking” adult basic education and literacy programs.

“That failed approach kept people in poverty and unable to upgrade their education and skills to get good jobs and lift themselves and their families out of poverty. Both the NDP and the Greens have solid commitments to invest in adult education and literacy programs and the unelected VSB trustee should be aware of that and prepare to work with a new government in very due course."

Hollie Williams, who represents the VSB’s adult education teachers, says her members hope a new NDP/Green government will keep its promise to reinstate funding for all adult students.

“The VSB must include adult education in its core mandate,” Williams told me by email this week. “The fact that we have been excluded is shortsighted and quite frankly, discriminatory. These are the same students who were denied services during their K-12 years. They are the same students who were pushed out the door with minimal graduation requirements. Many are youth and Indigenous students, immigrants and the working poor.”

Williams says the $550 course fee for students who've graduated is too much of a financial burden for minimum-wage earners to pay to take a course. Prior to the 2014 cuts, courses were fully funded by government and fee free.

Vancouver Elementary School Teachers' Association (VESTA) president Chloe McKnight says the decision to close the adult education centre will affect many people and should not be a made by a government appointee.

“Any closure decisions should wait until there are elected trustees back in place,” says McKnight.

She says VESTA is “very disappointed” the VSB isn’t reconsidering its decision to close the centre, given the promises made by the NDP and Greens.

“This decision impacts some of our most vulnerable students in the district and yet constitutes such a small percentage of the overall budget. We are also very troubled by the narrative that somehow adult education is outside of the so-called ‘core mandate’ – students enrolled in adult education are enrolled in K-12 courses, and include students from the K-12 system and therefore we see all adult education students as part of the mandate of the VBE.”

“We believe that all learners should have access to public education, regardless of age, and that the VSB should be supporting that access. It is essential that these opportunities be available for individuals, without prohibitive costs or accessibility challenges, and that the system has the opportunity to grow, and not be limited to just two sites,” McKnight told me by email on Thursday. “Keeping Main St open and continuing the youth program at Gathering Place is what is best for students in Vancouver.”

Turner is also reducing staffing and hours at the district’s Gathering Place adult education self-paced program and is closing its youth program.

After this column was originally posted, the VO received the following comment from the VSB's student trustee, Isabella Preite:

"Because funding can be tied to a particular party and its promises, students do not see an issue in potentially halting the process until government is solidified as a result of the 2017 provincial election. However, students appreciate and understand that the district has made its budget decisions based upon the funding received from the provincial government at that moment."