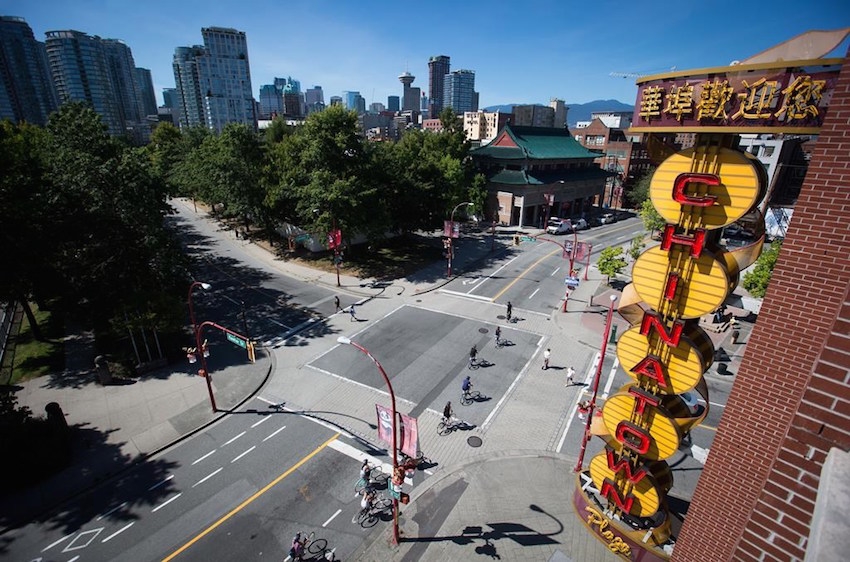 Vancouver's Chinatown seen from Keefer and Carrall Streets. Photo by The Canadian Press.

The transformation of Vancouver's Chinatown, fuelled by a changing population, crisis of affordability and ripe potential for new development, has left some locals calling it either a dying neighbourhood or one under threat of gentrification.

As the city begins to review the impact of its economic revitalization strategy for the neighbourhood, which ended last year, community members are at odds whether Chinatown's direction is what they want.

"With all the developments that are happening in the area, they're condos for the most part and they're not being catered to the residents that live there right now," said Yuly Chan, a member of the Chinatown Action Group.

"Just because people are poor, or are income assistance, it doesn't mean they can be pushed out of their own neighbourhood."

Vancouver's Chinatown is one of the oldest in the country, established in the late 1880s when early Chinese immigrants, many of them railway workers, settled in the area near what is now the downtown core.

While the area has grown with waves of immigration and development over the decades, it remains one of the poorest neighbourhoods in Vancouver.

A more recent report by First Call B.C. found that the child poverty rate in Chinatown in 2013 was a staggering 59 per cent.

A three-year economic plan, in conjunction with a longer term neighbourhood plan, was introduced by the city in 2012 to address concerns about the growing number of closing storefronts in Chinatown, city planner Karen Hoese said.

The strategies allowed for taller buildings in select areas of Chinatown to bring more residents into the neighbourhood, with the catch of requiring developers to contribute new amenities like community centres in return for the extra height on new construction.

It also protected historic facades and set standards for new buildings to match the unique esthetics of the neighbourhood.

Whether the plans have resulted in the desired effect of bringing necessary amenities to the area, along with new business and more housing — and whether current residents are happy with the results — will be reviewed by city planners in the coming months, Hoese said.

The need for more affordable housing and the loss of Chinese storefronts are among the concerns Hoese said she's already heard from the community.

Melissa Fong, a PhD candidate studying neighbourhood revitalization planning with a focus on Vancouver's Chinatown, said neighbourhoods across the city are losing their identities as they are redeveloped.

High-end coffee shops and boutiques that have popped up across Chinatown and other Vancouver neighbourhoods don't service those living around the poverty line, Fong said.

Many of those establishments also fail to connect with Chinese seniors who are more comfortable speaking in their native tongue and look for cultural-specific products, she said.

However, Hoese said while the city can control the look and density of new buildings, it can't regulate the culture created by the people and businesses that move in.

"We can't discriminate against users of the area, we can't determine who the residents are or who rents out storefronts," Hoese said.

"It's up to the community and business owners and the people who live there and shop there to make sure that the right type of business are there."

An encouraging factor, Hoese said, is the growing involvement of young people who are speaking out for the community.

Chan said many members of the Chinatown Action Group are young people who grew up around the neighbourhood like herself and are now getting involved to learn about their cultural ancestry from the seniors who continue to live there.

"We want Chinatown to be a vibrant neighbourhood ... that is intergenerational, where people who are marginalized are able to have access to the things that they need to live healthy, decent, dignified lives," she said.

The history of Vancouver's Chinatown, documented in menus