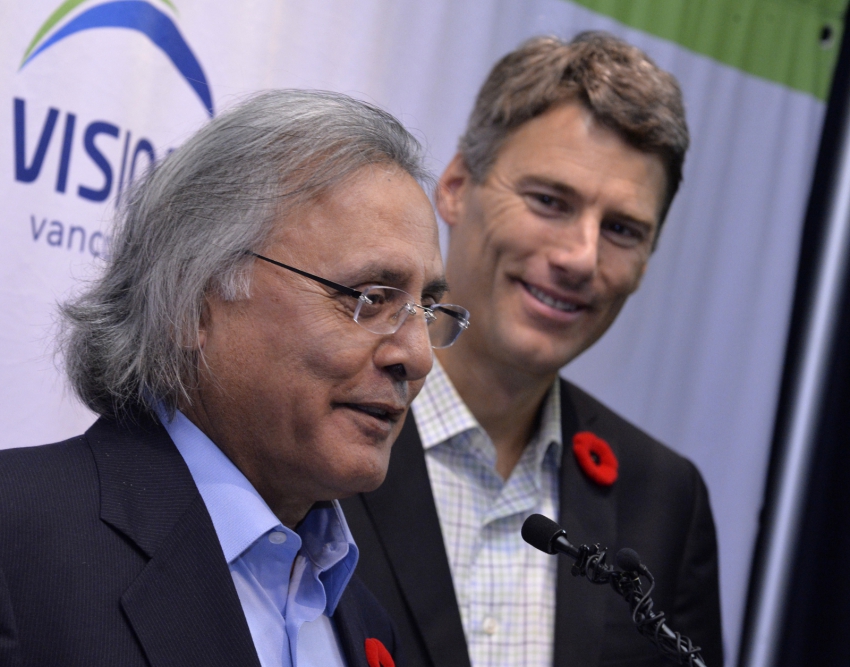 Dosanjh, who briefly served as B.C.'s  first Indo-Canadian premier, is famous for speaking out against extremists within his own Sikh community in the early 80s. As a result of his views, he was savagely attacked with a crowbar outside his law office, receiving 80 stitches to his head.  He was the first provincial leader to march in a gay pride parade in 2000, and advocated for equal rights to same-sex couples. At the federal level, he pushed for public health care as health minister and pushed for integrating foreign-trained health professionals into the Canadian system.

Dojanjh said Vancouver -- which has been his home since he immigrated from England in 1968 -- had made gains on on a number of issues over the past six years, and that "progress is at the risk of being stopped." He criticized the NPA's platform for its lack of reference to homelessness or affordable housing, and said LaPointe 'walked away' from difficult questions on these issues.

The NPA's platform, in fact, says it will allocate over $350 million toward addressing "housing, homelessness and other social issues" in the Downtown Eastside, but has been criticized for a lack of specifics.

When asked by a prominent editor if he was ready to knock on doors for Vision, Dosanjh responded:

"The city of Vancouver, the province, the country has changed that people like me are welcome at the doorstep -- most of the time. You know why that has changed? It has changed because of the work of people like Gregor Robertson and others who are progressive people."

"You know, the NPA used to be the party of people like Gordon Price," he said, in reference to the city's first openly gay city councillor. "It no longer is. And that's why it is so important for us to continue the progress in the city of Vancouver."

When pressed about his reputation as "somewhat polarizing figure" and how that could affect Vision, Dosanjh said he's proud of the issues he stood for in the past, which have included secularism and human rights.