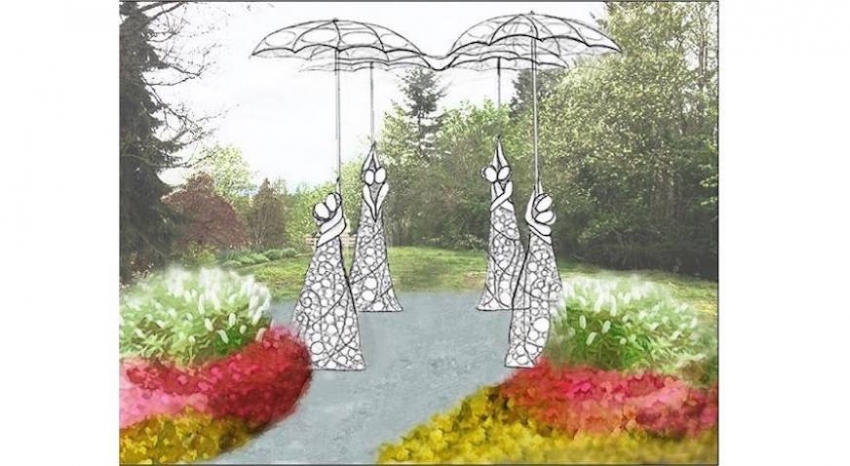 A sculpture dedicated to eternal love will be coming to the lookout above the Quarry Garden in Queen Elizabeth Park. Photo courtesy Vancouver Parks Board Facebook page.

The Vancouver Park Board approved the concept and location for the new public art sculpture last night. Bruce Voyce, a well-known and celebrated artist from Vancouver's Strathcona neighbourhood, submitted the winning design.

"The new love locks sculpture is called Love in the Rain," said Vancouver Park Board Chair Sarah Kirby-Yung. "The sculpture adds a new public artwork to our parks and addresses concerns raised about the number of love locks being attached to fencing on the Burrard Bridge and sites in southeast False Creek."

The unique work with four entwined couples celebrates the shelter that love brings and the union that it forms, and speaks of love in the temperate rainforest. Surrounding plantings will be themed in a red, black, yellow and white colour scheme to symbolize and celebrate all people.

The artwork will support several thousand locks on the skirts of each couple. Keys can be deposited in a box on site and will eventually be melted down to become part of a future sculpture.

A public consultation campaign ran in August and September, 2015. Residents were invited to vote for one of 13 suggested park locations, or nominate a different park location, for a love locks sculpture. 2,097 surveys were completed and 57 percent of respondents liked the idea.

The public art project supports the Vancouver Park Board's Arts Policy, which recognizes the arts as an essential element in a vital, creative and balanced city. The sculpture is expected to be completed and installed this August.