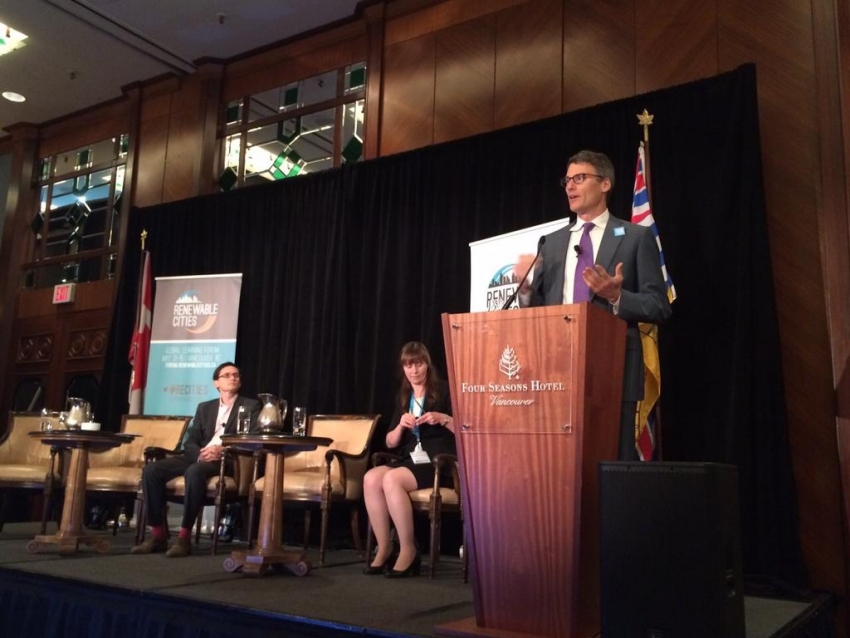 A little over a month after Vancouver city councillors publicly and unanimously pledged to develop a plan to move their city to 100 percent renewable energy, experts from around the world are converging on Vancouver to participate in the Global Learning Forum, an initiative Simon Fraser University’s Centre for Dialogue’s Renewable Cities Initiative is hosting.

During the two-and-a-half day conference, renewable energy leaders and advocates will join Mayor Gregor Robertson to discuss how Vancouver and other cities can follow in the footsteps of San Francisco, Sydney and Copenhagen, which already have 100-per-cent renewable energy goals.

Renewable Cities Executive Director Michael Small says it is a daunting, but also important task for all cities to take on – not just for environmental reasons, but economic ones as well.

“Going green in this way isn’t just good for the planet, it is also good for the regional economy,” he says. “By tapping into the burgeoning green technology sector, Vancouver stands to significantly benefit by being on the cutting edge of the coming renewable energy shift.”

Small says that according to a recent Pembina Institute report, BC already boasts 14,000 renewable energy-related jobs. A shift like that being discussed at the Renewable Cities forum will only up this number in the coming years.

He says he’s hopeful that with the right people in the room, Vancouver and other municipalities interested in adopting such a renewable goal will be able to make some significant strides in the coming years.

“It is not going to be simple or easy but we can borrow great ideas from the cities against which we already compete in the international marketplace for investment and talent. It is a goal worthy of Vancouver,” says Small.

“It will keep Vancouver in the vanguard of cities that are tackling — not just talking — about concrete solutions to address climate change.”

According to SFU Centre for Dialogue Director Shauna Sylvester, the forum is the first gathering of its kind. She says the ultimate goal of the conference isn’t just to support Vancouver, but to also create a global forum where good ideas, proven strategies and common obstacles can be effectively explored and exploited.

It is a dialogue that organizers expect will be particularly informative because of the calibre of participants attending the forum.

Experts travelling to participate in the forum include Mark Jacobson, a Stanford Professor and the university’s Director of the Atmosphere/Energy Program; Brian Hansen, who is responsible for city-wide transportation and environmental strategies for the City of Copenhagen; as well as a wide range of leading politicians, municipal planners and business people from around the world.

Sylvester says the timing of the forum is key. “The burgeoning movement of cities worldwide that are implementing aggressive renewable energy and energy efficiency targets in their electricity, heating and cooling, and transportation systems is startling,” she says.

“We have over 50 per cent of the world’s citizens and more than 80 per cent of Canadians living in urban environments. Vancouver’s decision to take a leadership role in becoming 100 per cent renewable energy powered is as important as it is inspiring.”