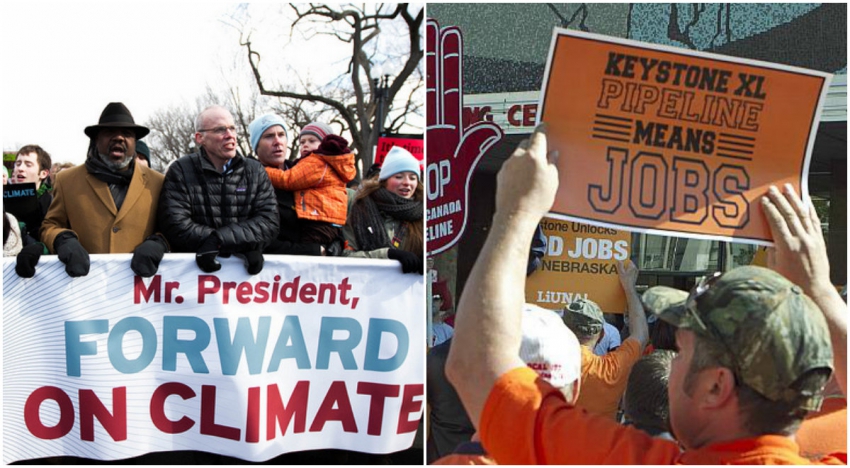 The controversial Keystone XL project, a proposed 1,897 km pipeline that would carry oil sands bitumen from Alberta to refineries in the Gulf Coast, is back at the top of the U.S. political agenda now that the mid-term elections are coming up in November.

Republicans -- who are expected to make significant gains this year -- support the pipeline, with some declaring they would push through a Keystone bill if they were to be elected.

"It's very, very likely that there will be a Keystone bill fairly early on in 2015," Ben Lieberman from the Republican-controlled House energy committee told audiences last week at the Wilson Center think-tank.

David Roberts, a writer for popular environmental news site Grist, called the current situation an "unholy nightmare" for President Barack Obama, who has repeatedly delayed a decision despite pressure from Senate Democrats to back the project.

Although the Keystone XL pipeline has been touted as a job-creator by proponents, the project has been widely opposed by environmentalists, who say it will incentivize for Canada to triple its oil sands output by 2035. NASA scientist James Hansen said rapid oil sands expansion would mean "game over" for the climate.

Prime Minister Stephen Harper made repeated unsuccessful attempts to convince the U.S. President to back Keystone XL, only to be rebuffed. A Bloomberg article from April said Harper considered Obama a "frustrator in chief" on the Keystone XL pipeline.

If the Republicans manage to take control of the Senate, the President could be forced into the choice of either approving the Keystone pipeline or rejecting the project outright.

"Right out of the box, Republicans should move quickly on proposals where they and the administration agree, such as giving the president (fast-track) authority to negotiate trade deals that receive an up-or-down congressional vote, or on issues that have significant support from Democrats, like the Keystone XL pipeline," Republican strategist Karl Rove wrote in a recent op-ed in the Wall Street Journal.

But even if the Republicans win a majority, the project may still face delays due to lawsuits and legal challenges. Last year, a Nebraska State Governor's attempt to legislate approval of the Keystone XL pipeline was struck down in court as "unconstitutional" and declared "null and void".

Billionaire climate activist and Democrat Party funder Tom Steyer has also pledged $100 million to Democrats who would be willing to fight the project from gaining approval.

But even if the Keystone XL pipeline doesn't move forward, TransCanada -- the Calgary-based pipeline giant proposing the project -- may have a way around U.S. decision-makers. TransCanada is proposing a new 4,500 kilometre pipeline called "Energy East" which would give Canada’s oil-sands crude access to the same refineries that Keystone XL is mean to to supply.