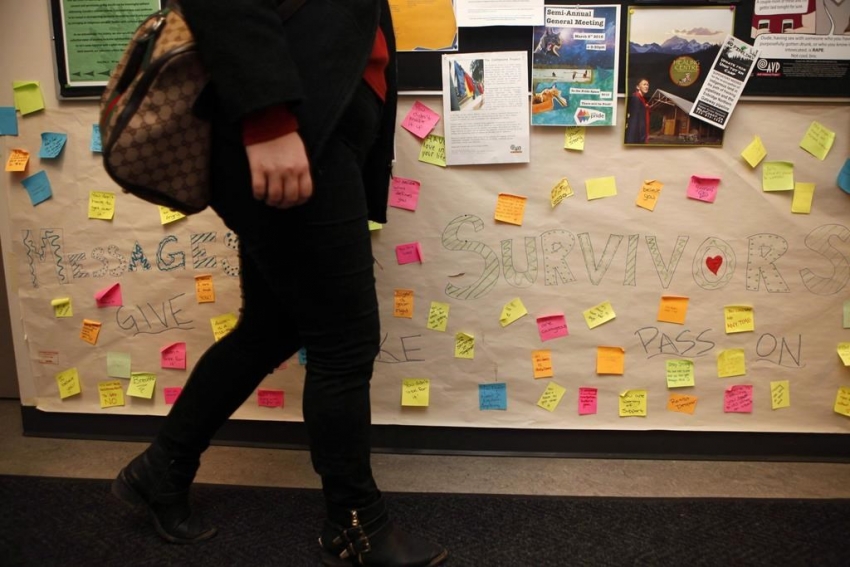 VICTORIA — A student says the University of Victoria failed her in its investigation of a sexual assault complaint and warned her to stay quiet about its findings.

The student said she had to request the investigator's report. When she received a redacted version several weeks later, an attached letter warned her not to discuss the findings with anyone other than her lawyer, family, counsellor or police.

The report determined she had not been sexually assaulted because she hadn't verbally said "No," even though the investigator found her to be a credible complainant, she said.

"I felt completely invalidated and silenced," said the woman, who asked not to be named. "I was really frustrated."

The woman and two students who work in residences have come forward with complaints that the university is failing sexual assault victims and fostering a culture of silence. The allegations emerge as universities across Canada face criticism of their handling of campus attacks.

Joel Lynn, executive director of student services, said the University of Victoria encourages the campus community to have an open dialogue about sexual violence. He said students who report assaults are connected with support workers who guide them throughout the process.

He said he could not discuss specific cases, but investigations rely on the Criminal Code definition of sexual assault, in which silence is not considered a form of consent.

He said external investigator reports are first given verbally but the written report has to be requested, so that sensitive legal and privacy information about third parties can be removed.

A copy of the letter received by the student states that "failure to maintain confidentiality may result in the university pursuing disciplinary actions with its applicable policies."

But Lynn said support staff help students understand that it's "their story to tell."

"We do caution students about ... disclosing third-party information, but we certainly don't put any barriers around students where they can't tell their story," he said.

Like many universities in Canada, the University of Victoria lacks a stand-alone policy to respond to sexual assaults and instead relies on a non-academic misconduct policy.

The student said she was assaulted in November and immediately reported it to the school. She said she decided against going to police because she feared how she would be treated by officers.

The school hired an external investigator, but the student said — in contrast with Lynn's statements — that she was offered very little support throughout the process. In the meantime, she saw her alleged assailant nearly every day on campus, where he continued to live, she said.

"It's pretty terrifying," she said. "It got to the point where I didn't feel comfortable walking around on campus by myself."

She said she later learned at a meeting with university officials that the school took some action including requiring the student to move off campus but he was not expelled. It was at that meeting she found out she had to request the report.

She wants the university to create a stand-alone sexual assault policy, offer more support to complainants and to ensure staff and students have full training on sexual assault and consent. There are students who have been sexually assaulted and don't feel safe reporting it, she said.

"The safety of every student should be a priority for the university, and it's not right now," she said.

"I think it's really terrible that the people who are the most vulnerable are the ones who have to protect ourselves the most."

The staff members, who spoke anonymously because they fear repercussions, say a supervisor recently told them to call security if journalists showed up after a male student was arrested in connection with four alleged assaults in a separate case.

Asked about the allegation, the university responded that residence staff are asked not to speak to media on behalf of the university and to report anyone gaining access to student residences without permission.

"The assailants are allowed to remain on staff, remain on campus, remain as students indefinitely. Most of the time, nothing happens," said one of the students.

"In not having a clear policy in place, in not having consequences for the people who did this ... the university is ultimately complicit in all these sexual assaults. They're allowing it to happen."