'Unacceptable' that some fuel from spill can't be cleaned: First Nation chief 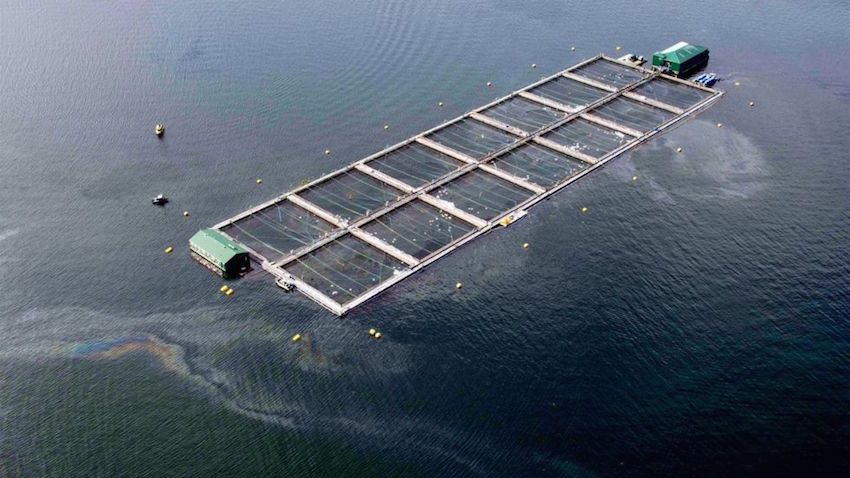 The thin layer of fuel, which covered a 5.5 kilometre radius at one point outside the salmon farm where the spill originated, has been deemed unrecoverable because it cannot be captured by skimmer vessels or sorbent materials. Photo by Twyla Roscovich, courtesy Twitter/@Chiefbobbyc

An oily rainbow-like sheen on the waters surrounding a diesel fuel spill off the north coast of Vancouver Island cannot be cleaned up, sparking fears among a nearby First Nation that relies on clam digging for food and economic security.

The thin layer of fuel, which covered a 5.5 kilometre radius at one point outside the salmon farm where the spill originated, has been deemed unrecoverable because it cannot be captured by skimmer vessels or sorbent materials, British Columbia's Environment Ministry said.

Fuel has made contact with some shorelines in the Burdwood Island group, a sensitive area teeming with clam beds that the Kwikwasut'inuxw Haxwa'mis First Nation says are crucial to its economy.

"Would you put that sheen on your vegetable garden?" asked Bob Chamberlin, the nation's elected chief councillor. "They have no technology whatsoever to recover that sheen. That is utterly unacceptable."

A flyover on Monday showed that the sheen had been reduced in size to about 1.5 kilometres and represented about 70 litres of fuel, said Supt. Philip Murdock of the Canadian Coast Guard. He said authorities will now determine which beaches are affected and begin testing, including on shellfish.

Most of the area used by the First Nation for clam digging is closed due to biotoxin concerns that existed prior to the spill, but Chamberlin said he is concerned about long-term effects.

Cermaq Canada, which owns the farm in Echo Bay, about 70 kilometres from Port Hardy, said it "highly regrets" the incident.

Brock Thomson, Cermaq's regional production manager, said staff contacted the coast guard just after 5 a.m. Sunday once the spill was discovered. Employees deployed equipment on site and when it was light out they gathered as much gear as they could from other farms in the area, he said.

Thomson said staff were transferring fuel from one tank to another and left the nozzle unattended, which led to the release of the diesel.

"The long and short of it is the root cause of the release was human error," he said.

The federal Fisheries Department has said the pump was left on overnight.

Officials now estimate about 550 litres of fuel spilled, less than the 900 to 1,500 litres initially reported. Coast guard crews from Port Hardy were the first to respond and Cermaq has also contracted the Western Canada Marine Response Corp. to help with the cleanup.

Courtney Bransfield, emergency co-ordinator for the Mount Waddington Regional District, said all recoverable diesel was contained to the fish pens by Sunday afternoon. She said the sheen in the surrounding waters was unrecoverable but would eventually evaporate.

However, Peter Ross, an ocean pollution expert with the Vancouver Aquarium, said parts of it will evaporate and other parts will remain droplets in suspension or on the shore.

"The diesel is not going to disappear magically. It's going to continue to weather, get older as a product and end up in different parts of the environment in different forms."

He said a sheen is a mixture of some diesel components that remain behind after the evaporation of toxic components. Therefore, a sheen is less harmful than other fuel components, but it still shouldn't be taken up by shellfish that are eaten by humans, he said.

Ross, a globally recognized scientist who previously worked for the federal government, said the spill was modest and in sheltered waters.

"If we can't clean that up, then how does that speak to our capacity to deal with large ocean-going tankers with heavy fuel products?" he asked. "I think it underscores the need to improve our ability to respond to these events."

Cermaq said its salmon are behaving normally after the spill. Thomson said the incident occurred when it was dark out and the fish were deep in the water columns, limiting their exposure. All salmon are tested for contaminants before they are sold to consumers, he said.

Laurie Jensen, director of communications and sustainability, said Cermaq has launched a review of procedures to prevent future spills. The staff member who made the error has eight years' experience and all employees are "devastated," she said.

"The guys are pretty passionate about what they do and this has hit them pretty hard. They take a lot of pride in their work and to have a mistake made, my heart goes out to them. We all regret that this happened."