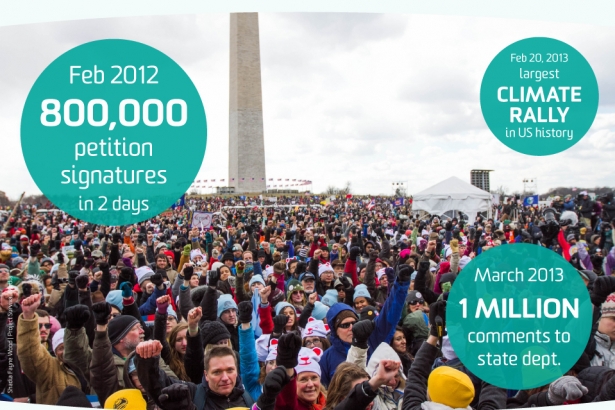 The largest movement in the US right now is actually about Canada. Graphic courtesy of Communicopia.

The original plan of environmentalist groups in the U.S. was to deliver one million comments opposing Keystone XL to the State Department this morning. But the response from people all over North America speaking out against the Keystone XL pipeline and the Canadian tar sands has been so enormous, a coalition of youth-driven environmental groups will now be delivering upwards of two million signatures to the doorstep of the White House this morning.

Dozens of organizations, including 350.org, Rainforest Action Network, Sierra Club, SumofUs and the Centre for Media and Democracy, have come together to present Secretary of State John Kerry with two million reasons to say no to Keystone.

Amanda Starbuck of Rainforest Action Network said opposition is coming from all across the country.

“The two million comments delivered today reflect a huge wave of resistance to the pipeline. From the Oglala Lakota Sioux fighting to stop the pipeline from entering their territory to the hundreds of students arrested at the White House gates, we stand united with everyday Americans who are ready to do what it takes to stop this pipeline, once and for all.

The action today might be focused in the American capital, but follow the thread and it leads all the way back to Alberta. Energy Action Coalition executive director Maura Cowley said it’s important for young people to make that connection.

“Any expansion in tar sands, when you look at the issue of global warming, young people across the globe are going to be the most impacted.”

She said EAC works with young people in Alberta, particularly First Nations youth, and the sentiment is much the same on both sides of the border.

“We need to see both of our governments moving away from fossils fuel, and especially dirty tar sands oil, as quickly as possible.”

Action on American turf protesting the Canadian tar sands has been steadily growing. Last year, upwards of 40,000 people converged on the White House in what has been called the largest climate rally in history. Just last week, more than 1,000 people—mostly students—march on DC and 398 of them were arrested after hand-cuffing themselves to the White House fence in protest of Keystone XL.

Andrew Nazdin, field director for Energy Action Coalition, dropped everything in 2012 after receiving a phone call from a friends asking for his help on the Obama re-election campaign. Since then, he has focused on holding the president accountable for the promises he made then.

Last year he organized an open letter to Obama from more than 200 former campaign staffers, urging him to stand up for the commitments they all worked for in 2012.  He will speak at today’s gathering.

Nazdin said many of the latest generation of voters feel a special connection to Obama.

He believes that if Obama doesn’t put a stop to Keystone, there will be a significant loss of support.

“I think Obama really holds the faith of our generation in his hands with this.”