The Burnaby incinerator has been burning garbage since 1988. But with population growth over the next 20 years, it won’t be large enough to handle the region’s future waste. Metro Vancouver is moving ahead with a plan to build one, or more new incinerators to handle garbage from a region expected to grow by one million people by 2035. It’s a controversial plan with some Metro Vancouver directors, the zero waste community and citizen groups opposed. The Fraser Valley Regional District (FVRD) is  fighting the plan with a very public TV and radio ad campaign. 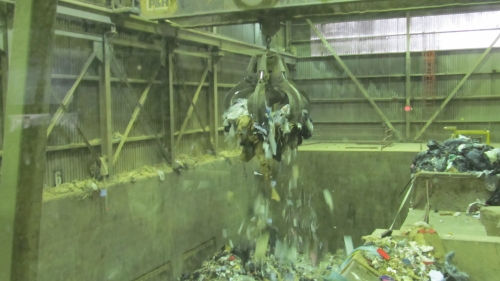 In 2010, FVRD commissioned a study of the Lower Fraser Valley air shed by UBC atmospheric scientist Prof. Ian McKendry. His study concluded that adding another incinerator to the region’s air shed “will likely have a deleterious effect on air quality” by adding more nitrous oxides (NOx) and sulfur oxides (SOx).  McKendry asserts that “there is indeed sufficient cause for concern, especially from dioxins and nano-particles.”

FVRD contends that no new emissions should be permitted in the regional air shed.  Metro Van says that is unreasonable. “It must be acknowledged that some new sources of emissions are necessary and unavoidable, and can be acceptable if they are appropriately managed and provide a benefit to the region or air shed,” says a Metro Van response to the McKendry report.

In recent years, Metro Vancouver has launched a number of new initiatives to improve air quality in the region. Those include a new bylaw reducing diesel fumes from bulldozers and other non-road vehicles, a new air quality and GHG management plan and a new mobile air quality monitoring unit and station for the Fraser Valley.

In the debate over the health impact of incinerators, there is little middle ground. Numerous health organizations and individuals are vehemently opposed to incinerators.  On the other hand, Metro Vancouver cites both Health Canada and the UK Health Protection Agency claiming “potential health risks from modern waste incinerators are not a concern.”

Asked if he would move his family to live near the Burnaby incinerator, Chris Allan says “absolutely. We have a number of people who work in our solid waste facility who live in the Burnaby south slope.”