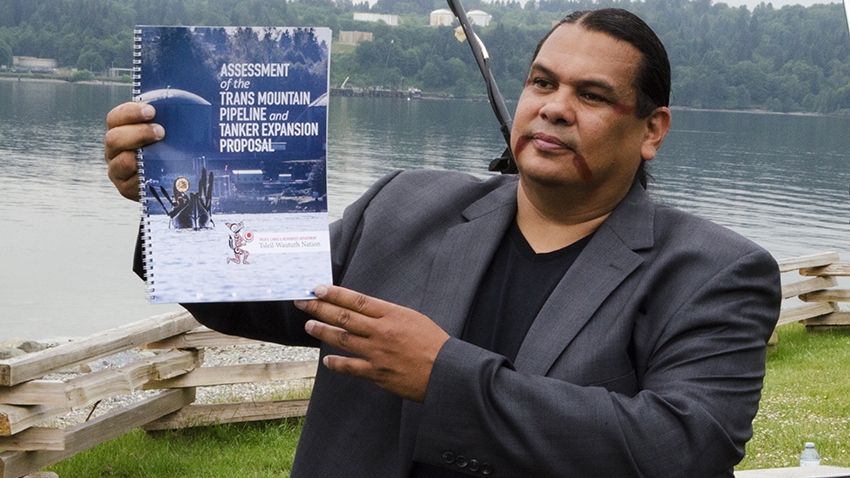 In an old legend from the Tsleil-Waututh First Nation, a two-headed serpent brings hunger and disease to the Burrard Inlet, killing off the salmon. In order to survive, the people had to confront the serpent and slay it.

The Tsleil-Waututh Nation announced that the project would not be allowed to proceed on the Nation's territory. It also released a scathing report on the Kinder Morgan Trans Mountain expansion, outlining the project's risks to health and environment.

Kinder Morgan’s pipeline project proposes almost 1,000 kilometres of new pipeline to carry diluted bitumen from Edmonton to Burnaby. If approved, the expansion would bring a five to seven-fold increase in the number of oil tankers through the Burrard Inlet.

The Tsleil-Waututh report found that the fumes from spilled oil have the potential to make over one million people sick within two hours. It also states that an oil spill would seriously harm all components of the Tsleil-Waututh economy.

Among the people who stood with George during the presentation was Gordon Christie, the director of the Indigenous Legal Studies Program at UBC. Christie is one of four law professors who signed a statement recognizing the release of the Tsleil-Waututh's assessment of the pipeline project. 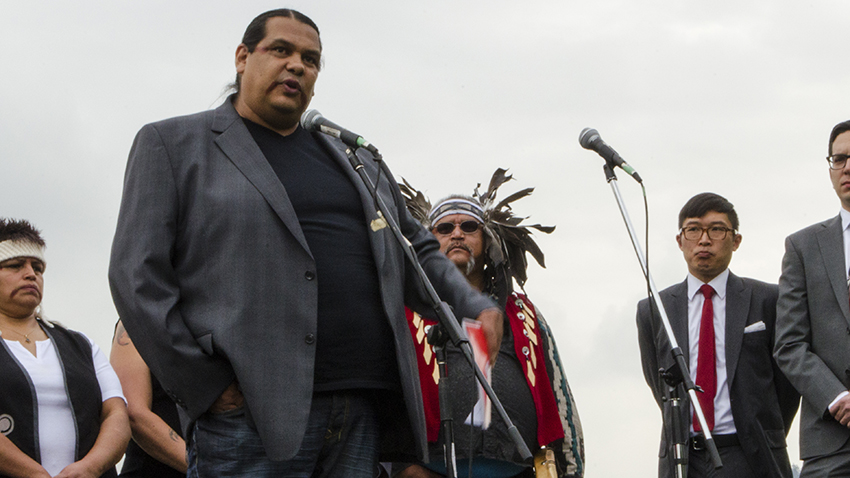 Rueben George addresses the crowd during the presentation of the assessment. Photo: Carlos Tello

Christie asserted that the Nation’s assessment is as valid as the National Energy Board's upcoming review of the project.

“The Tsleil-Waututh’s assessment is a pioneering example of a First Nation acting on its authority to review and decide whether a project should proceed in its territory,” the professors argue in the statement.

The professors warn that Tsleil-Waututh’s decision to oppose the pipeline project is legally significant because of the Supreme Court of Canada’s Tsilhqot’in decision that puts more responsibility on resource developers to obtain consent from First Nations.

In an emailed statement, Kinder Morgan said that the company “deeply respects aboriginal rights and title,” and that they will fully respond to Tsleil-Waututh’s assessment through the National Energy Board's evaluation process.

During his speech, George recognized the support of Burnaby residents against Kinder Morgan, calling them the Nation’s "allies."

“They are showing a great deal of leadership in protecting the earth and in fighting for a sustainable future for all of our children,” BROKE member Ruth Walmsley said. “It's absolutely essential that we stand in solidarity and support each other.”

George agreed, saying his Nation was standing for all people along the Burrard Inlet who opposed the project.