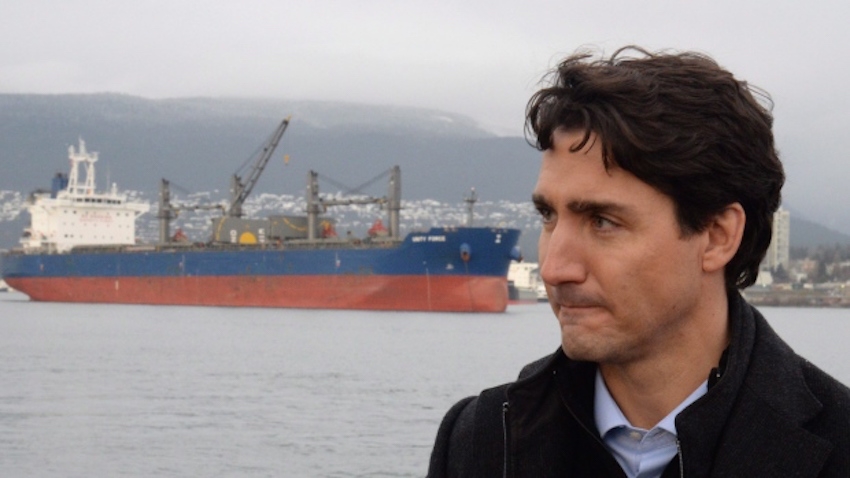 In Vancouver for the first time since announcing approval for the twinning of the Trans Mountain Kinder Morgan pipeline, Prime Minister Trudeau tours a tugboat in the harbour on Tuesday, Dec.20, 2016. Photo by Jonathan Hayward/The Canadian Press.

During his first visit to British Columbia since the controversial approval of the Trans Mountain pipeline expansion, Prime Minister Justin Trudeau grappled with two major issues facing the province — tanker traffic and the opioid crisis.

Trudeau toured a commercial tugboat on Tuesday in Vancouver, where he announced that two emergency towing vessels that were promised as part of a federal plan to protect Canada's oceans will operate on the West Coast.

"Both of these vessels will operate on Canada's West Coast and help to keep large disabled vessels off B.C.'s pristine coasts," Trudeau said in a news release.

The vessels, announced in November as part of the federal government's $1.5 billion Oceans Protection Plan, will help the coast guard tow large commercial ships that are in distress and pose a hazard to navigation and the marine environment.

The announcement and image of Trudeau steering a yellow tugboat in Vancouver's harbour appear to be aimed at easing fears of increased tanker traffic caused by Kinder Morgan Canada's $6.8-billion expansion.

Politicians and First Nations on B.C.'s south coast, including Vancouver Mayor Gregor Robertson, vehemently oppose the project. The City of Burnaby filed leave to appeal the government's approval in the Federal Court of Appeal on Tuesday.

"Yes, there will be people who still will disagree with this decision. That's fine. We're a country of people who have a broad range of perspectives and opinions," he told a Vancouver Sun editorial board that was live-streamed on Facebook.

"People are more than welcome to express their opinions, to campaign against me, to support politicians who will agree with them and not agree with me. ... This is all part of the democratic process."

He said some indigenous communities support the project, but those who oppose it "don't have a veto."

Trudeau said he also met with B.C's provincial health officer, Dr. Perry Kendall, to discuss the opioid crisis. More than 750 people have died in the province this year of illicit drug overdoses, many of them linked to fentanyl.

He said his government was working to reverse changes to harm-reduction measures that were made by the previous Conservative government. Health Minister Jane Philpott recently introduced a bill to remove unnecessary barriers to jurisdictions that want to open supervised-injection sites.

Trudeau said he "very interested" in seeing the results of pilot projects in Vancouver to provide addicts with prescription heroin.

"I'm certainly not philosophically or ideologically opposed to something that's going to save lives."

But he said there was no "one magic bullet" that would fix the situation. There's also a need for a major mental health strategy in Canada, which he said his government is working toward.

The approval of Trans Mountain has been applauded in Alberta and protested by some in B.C., but Trudeau said federal government decisions do not have to pit provinces against one another.

Premier Christy Clark has insisted for years her government will only support new heavy-oil pipelines if five conditions are met, including a "world-leading" marine oil-spill response regime.

Note to readers: This is a corrected story. A previous version said Trudeau toured a coast guard tug.