Friday (September 30th) is the last day to send your message to the government's online Kinder Morgan review panel. This post presented by LeadNow. 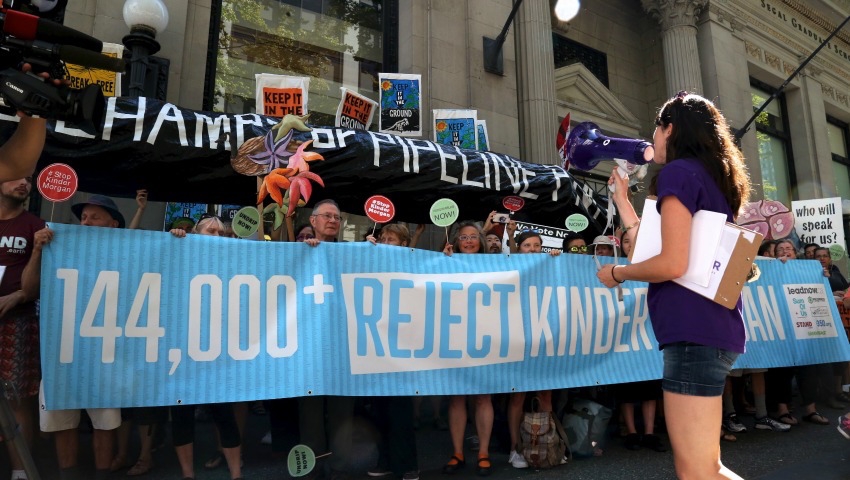 This fall, Prime Minister Trudeau failed one of his first climate tests. The Liberal government approved the Petronas Pacific NorthWest LNG terminal -- a project that will have greenhouse gas emissions that are “high in magnitude, continuous, irreversible and global in extent,” according to the Canadian Environmental Assessment Agency.

The next climate test for Prime Minister Trudeau is coming up on December 19th, and that’s the decision on the Kinder Morgan pipeline. Like the Petronas project, this pipeline would add massive amounts of greenhouse gas emissions to the atmosphere and ocean, in this case by transporting 590,000 barrels of bitumen to the BC coast and facilitating a growth in tar sands production.

While there’s rumours the government is already getting ready to approve this project and is simply waiting for the December deadline to make it official, there’s still time to stop it.

This past summer, the government’s Kinder Morgan review panel held public meetings across BC and Alberta to hear from affected communities. While these meetings have concluded, people across Canada have until Friday September 30th to submit online comments.

Here are four reasons why you should stop what you are doing and make a submission:

Climate change. The math is simple. If Kinder Morgan builds this pipeline, it will be impossible for Canada to meet its international climate commitments. Our government has to make a choice: new pipelines that will help send temperatures soaring past 2°C or action on climate.

Indigenous rights. This project is opposed by at least 16 distinct First Nations tribes along the BC coast. The government already violated its commitments to reconciliation by approving the Site C and Pacific NorthWest projects despite serious First Nations opposition.

Corporate influence on government. Since the last election, the government has met with Kinder Morgan 31 times, with the Canadian Association of Petroleum Producers 50 times, and with the Canadian Energy and Pipelines Association 53 times. Poorly advertised meetings  hosted by a fossil fuel lobbyist at the height of the summer, were the only way for affected communities in BC to have a say in this decision. .

Most people in Canada did not have a direct say. Yes, there were public meetings in BC and Alberta, but this is a project with national implications. The only way for most people in Canada to have a say in this process is by submitting an online comment to the government review panel.

People across Canada need to make it clear that this government will be held accountable for its broken promises and dangerous decisions.

If you think it’s time for the government to take climate change, tanker spills, and indigenous rights and title seriously, submit an online comment to the government’s Kinder Morgan review panel before Friday.