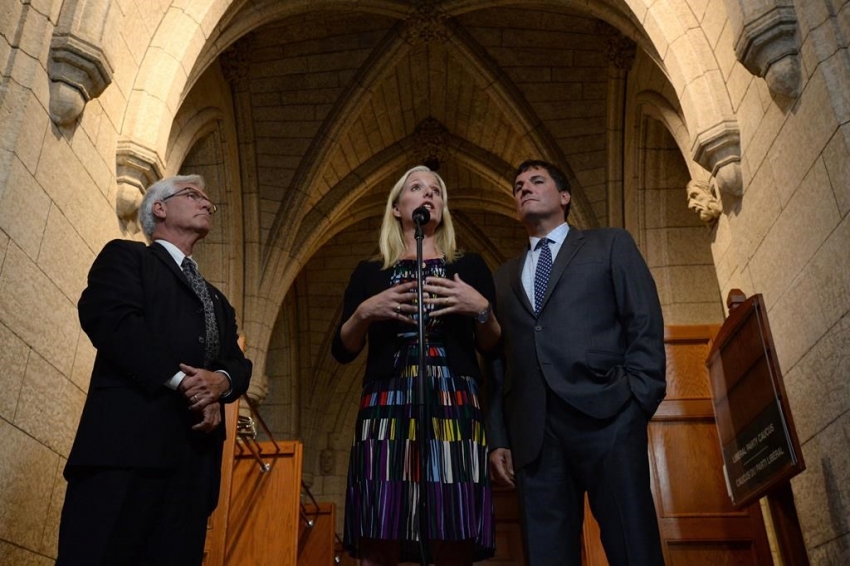 OTTAWA — Prime Minister Justin Trudeau used a Goldilocks defence Wednesday in an effort to position the federal Liberals in the sweet spot of a boiling debate over energy development and environmental protection.

Less than 24 hours after the government gave conditional approval to a massive liquefied natural gas project in northern British Columbia, Trudeau was in the House of Commons defending the decision, which clears a path for the production of millions of tonnes of greenhouse gases and billions of dollars in foreign investment.

"Unfortunately the members opposite either think we're not going fast enough or we're going too fast," Trudeau said after fielding questions from Conservatives and New Democrats on opposing sides of the LNG divide.

"Canadians know we need to grow the economy and protect the environment right now and do it right."

Critics are accusing the Trudeau government of policy incoherence as it simultaneously promises to repair relations with indigenous communities, ratchet down carbon emissions and boost economic development by ensuring natural resources get to market.

The decision to conditionally approve the $36-billion Pacific NorthWest LNG project on Lelu Island near Prince Rupert, B.C., was seen by some as a litmus test of the Liberal pledge to get serious on climate change. Others viewed it as the crucible for testing whether Trudeau was credible about expanding Canada's energy resource exports.

The liquefied natural gas processing plant, whose principal owner is Malaysia's Petronas, is designed to ship 19 million tonnes a year of frozen, liquefied gas to markets in Asia over the next 25 years.

Among the 190 conditions for approval is a cap on annual CO2 emissions of 4.3 million tonnes, not including the emissions that will result from fracking natural gas to feed the project.

Conservative environment critic Ed Fast said the Liberals are "all over the map in terms of their policies going forward," while NDP Leader Tom Mulcair said Trudeau had "pirouetted" on his promise to keep pipelines out of the Great Bear Rain Forest less than 48 hours after visiting the area with the royal tour of Prince William and Kate.

The Pacific NorthWest LNG plan includes a natural gas pipeline through the forest.

Their message, in a nutshell: trust us.

McKenna issued bland assurances that the massive increase in GHG emissions would be encompassed in the pan-Canadian climate plan she hopes to begin finalizing Monday in Montreal with her provincial and territorial counterparts.

And Carr beamed his approval, noting that during trips abroad "the message was loud and clear that there is a thirst for Canadian natural resources internationally. And what this decision shows is that we are being responsive to that need."

"We're encouraged that the federal government appears to be rolling up its sleeves to try and navigate a path towards what we have always believed is an important combination of sustainable economic growth while ensuring that you address environmental issues."

Geoff Morrison, manager of B.C. operations for the Canadian Association of Petroleum Producers, called it a "positive signal" for the energy investment community.

"There were questions about anxiety, I guess, among international investors as to whether Canada was an appropriate or desirable place to invest," he said in an interview.

"Undeniably this will be an encouraging sign to those individuals and those agencies and institutions that look to bring energy to their countries."

On the other side of the ledger, Green party Leader Elizabeth May called the Liberal decision an outrage. And Mike Hudema of Greenpeace Canada turned the Liberals' sunny catchphase from last December's international climate conference in Paris into a cudgel.

"If this is what Trudeau meant when he said, 'Canada is back on climate,'"said the group's news release, "then we and the planet are in big trouble."