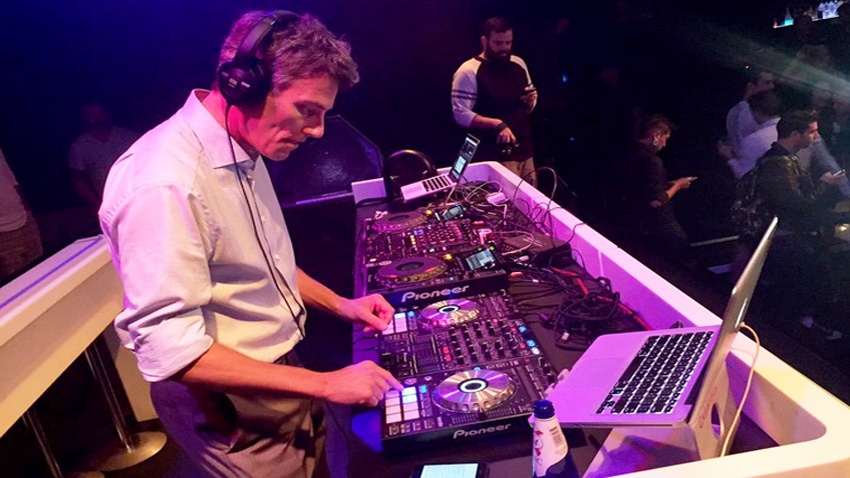 Mayor Gregor Robertson, fresh from his audience with the Pope, DJs the Vision:Pride kick-off at Celebrities nightclub. Photo: Twitter/@StepanVdovine

For the first time in Vancouver's history, the unfamiliar pink, blue and white Transgender Pride Flag was pulled up the city hall flagpole Monday, alongside the ubiquitous rainbow Pride Flag, announcing Pride Week 2015.

But the BC Liberal Party is reportedly not planning to be a part of Vancouver’s Pride parade after it refused to sign a pledge calling for new legislation to protect transgender people.

The annual event kicked off in earnest with the Vision:Proud party at Celebrities where the mayor took to the turntables while Jinkx Monsoon, winner of season 5 of RuPaul’s Drag Race, and host Joan-E held their own.

Robertson also seized the opportunity to compel the audience to pressure the ruling federal Conservatives and BC Liberals to pass legislation to protect trans rights.

Promising to be a little more unruly in getting the trans message out loud and proud, a gender-diverse committee independent from the Vancouver Pride Society is organizing an unsanctioned Trans, Twospirit & Genderqueer Liberation and Celebration March in East Van Friday (July 31).

Organizers are calling on trans, genderqueer, two-spirit people and allies to "uncage your rage" and take to the streets in an unsanctioned political protest/celebration of gender diversity. The fabulously dressed are invited to assemble at 5:30 p.m. at Clark park, E 14th Avenue and Commercial Drive, for sign making (supplies provided) before marching north on Commercial Drive, turning east on Grant and winding up at Victoria Park with speeches and performances by community members.

The event "stands in solidarity with indigenous people’s resistance to colonization" and "operates in a spirit of inclusion and solidarity with two-spirit people who may or may not also claim identities such as trans and genderqueer.”  More info here.

For those hankering for lighter fare, there's the Laugh Out! comedy night at the Vogue Theatre, also on Saturday. More info here.

Sunday culminates in the Pride Parade and festivities this Sunday in the West End, from noon-3 p.m. Route info and event schedule here.

Then, Clean Sober and Proud, a group of Pride substance-free revellers are holding this year's Unintoxicated event Sunday evening from 7 p.m. to midnight in the Davie Village Shoppers Drug Mart parking lot (1125 Davie St.). The event is hosted by the non-profit drug and alcohol addiction treatment centre, Last Door. Tickets are $15 in advance or $20 at the event. For more information, visit their Facebook event page.

For a full lineup of Vancouver Pride Week events check out the official website.