Trade Minister's trip gets B.C. "on equal footing" for exporting to Asia 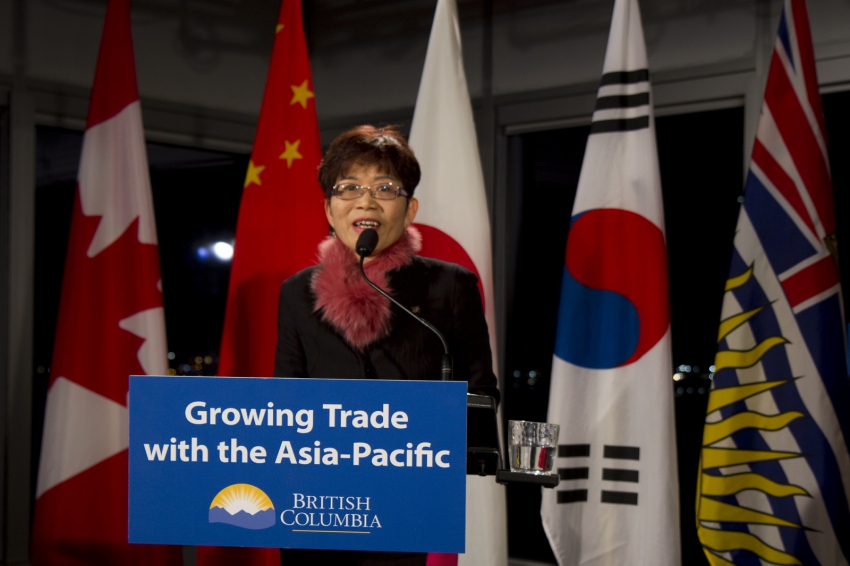 Photo from the Province of BC

Trade Minister Teresa Wat says her trip to China, Japan and South Korea was critical to helping BC build on and create new relationships.

The purpose of her trip  was to focus on promoting trade, generating BC business opportunities and creating jobs in BC. The three nations are the second, third and fourth largest export markets in BC.

Her first stop was Qingdou, which is a “new market” with a “bright future,” says Wat.

BC has signed an MOU - memorandum of understanding- on economical partnership with the city, which will pave the way for more investment ties in various sectors that include ocean technologies, agriculture, international education and clean technology.

“BC is the first Canadian jurisdiction to sign an MOU economical partnership with Qingdao,” said Wat in a telephone conference. “This agreement in particular provides investment representatives in China with the ability to engage Qingdao based companies on investment attraction and export development.”

Qingdao and BC have a lot in common, she says. Qingdao is a coastal city with the seventh largest port in the world, focuses on marine research sector and wants to be environmental sustainable. Wat says this allows BC business to expand into this market in the future.

With the recent signing of the Korea-Canada agreement, she says she expects the exports to grow to 32 per cent.

“In fact in the past couple of years, our trading volume with Korea has dropped somewhat, because our competitors like the US, Europe, Australia and New Zealand has secured their free trade agreement with South Korea, and our export producers have been competing on not an equal footing. So we are hopeful with the signing of the free trade agreement that all our exporters can have an equal footing with other jurisdictions.”

The visit to Japan focused on promoting BC as a stable partner and resource partner for Japan’s future energy needs including LNG. Visiting the Japan Home Show was Wat highlight, she says, ten BC companies were present. The event has become the main sales and marketing event for many BC wood product producers.

When asked how this trip differed from others she responded by saying that many seafood and fisheries companies secured numerous contracts this time and all the contracts and “figures will be available in a couple of months.”

Premier's trade mission to Asia weighed down by 'unique' delegation