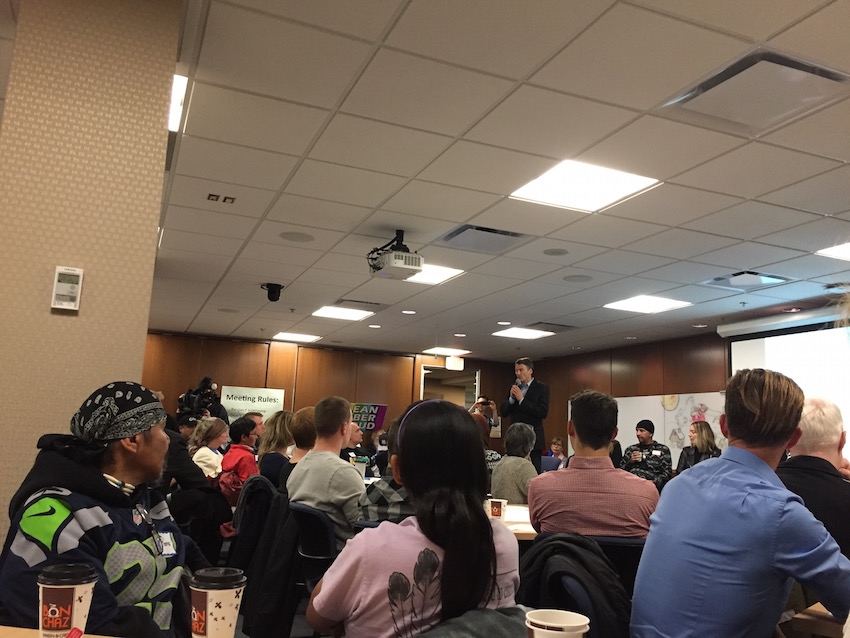 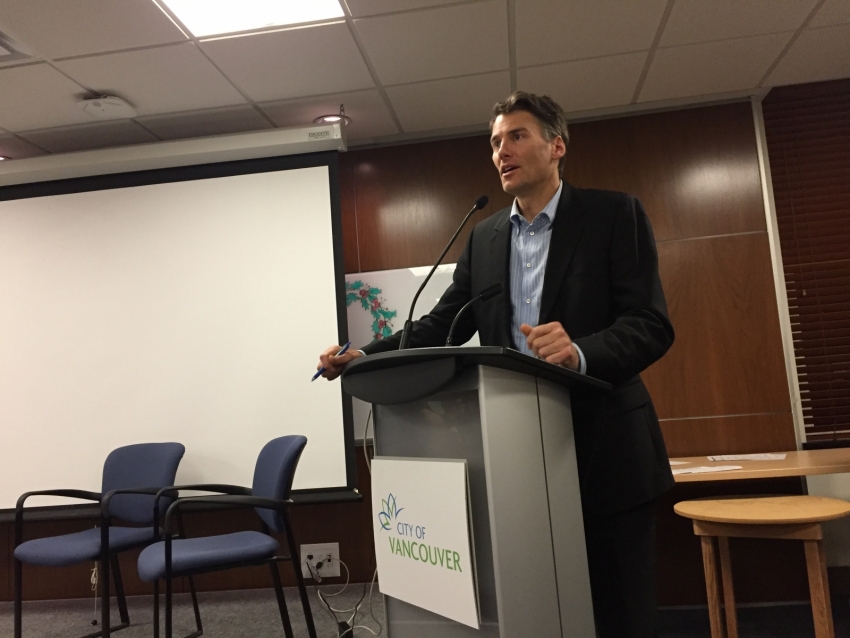 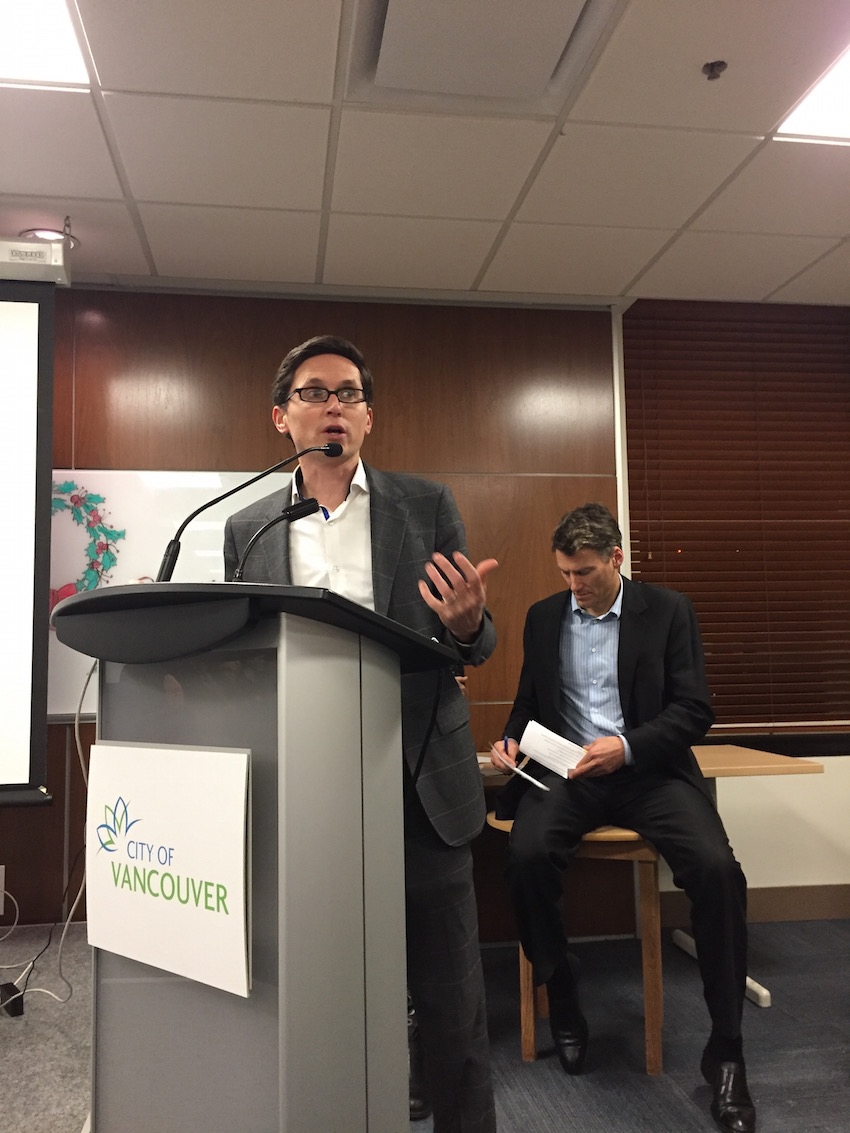 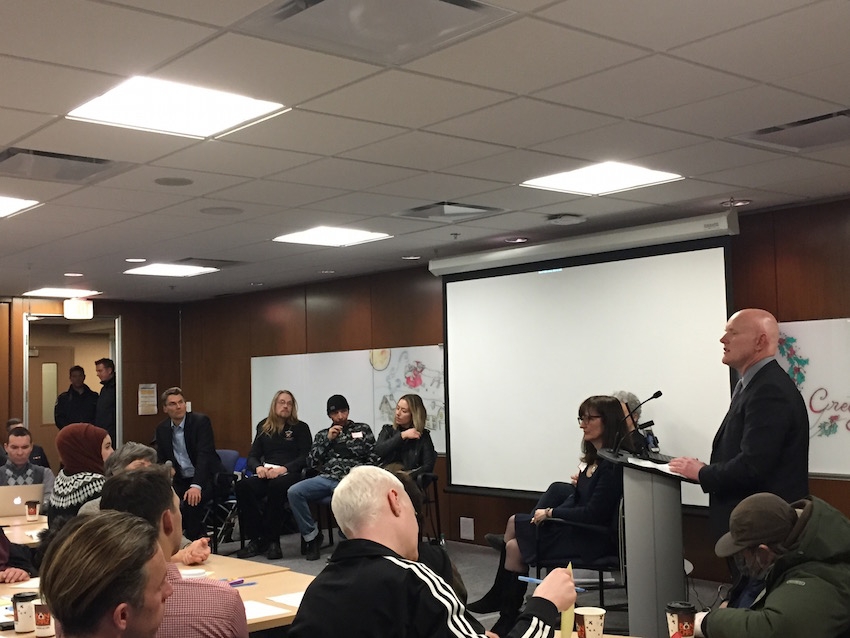 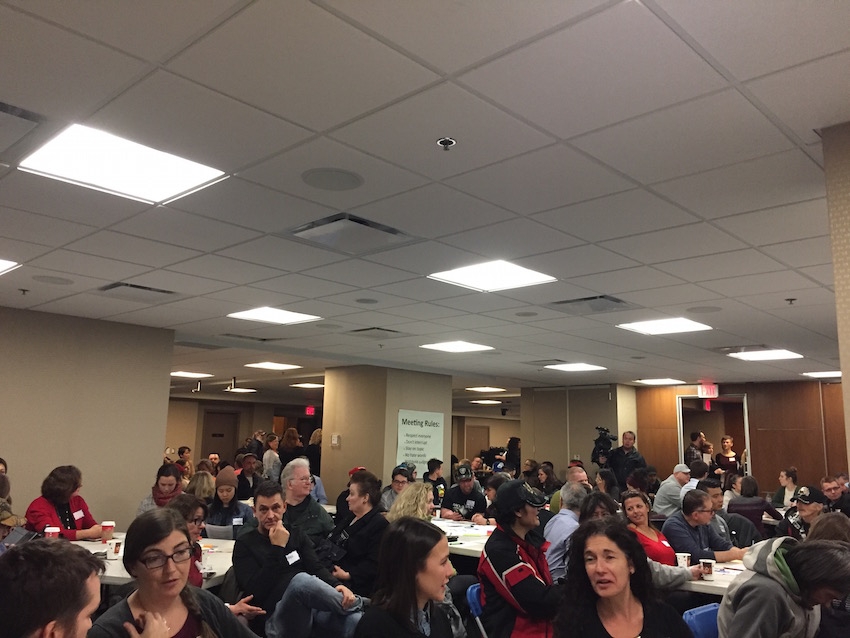 Over 200 people congregated to discuss the 622 overdose deaths across BC so far this year — a higher death toll than that of motor vehicle collisions. For many in the audience, those drug deaths were immediately personal: the forum was held in partnership with Vancouver Area Network of Drug Users (VANDU), and the Western Aboriginal Harm Reduction Society (WAHRS). Speakers included representatives from the Portland Hotel Society, Vancouver Urban Native Youth, and Moms Stop the Harm, all of whom spoke about experiencing firsthand the deaths of loved ones by illicit drug overdose.

Mayor Robertson opened by highlighting each representative of VANDU, WAHRS, shelter volunteers, and the first responders, saying he was impressed by the “diverse room of people who are plugged in and making a difference on the front lines”. He then drew comparisons to the crisis Vancouver saw 30 years ago with the HIV/AIDS epidemic, saying, “we lost a lot of people, reaching proportions beyond what anyone thought was possible.”

But noted that, “our city rose above this better than most others, and we taught a lot of other cities and communities how to deal with it.” He went on to note, “Our Four Pillars approach was something that created our safe supervised injection sites, which have saved countless lives and helped other cities around the world to do the same.”

The immediate response to the current fentanyl crisis unfolded with the city seeing supervised, or ‘witnessed’, injection tent-sites mushrooming across the Downtown Eastside. There are now 10 pop-up sites where workers and volunteers are suited to offer naloxone and suboxone, including a new “mobile medical unit” which the city rolled out on December 8th.

Stated by every drug user, healthcare professional, and harm reduction advocate who stood up to speak, these temporary pop-up sites are a critical step in saving lives, as well as in assisting first responders.

“It’s hard out there for people on the team, because these are our friends, and these are our families.” Al Fowler said, speaking on behalf of VANDU and the BC Association for People on Methadone. Naloxone is administered at the temporary injection sites in the event of an overdose — a highly probable event given fentanyl’s synthetic opioid potency.

See more
Deputy Provincial Health Office and Vancouver Police Sergeant Call Addiction a Health Problem, not a Criminal One
Archaeologists define their role in climate change: Not Just an ecological problem but a social one, new research paper says