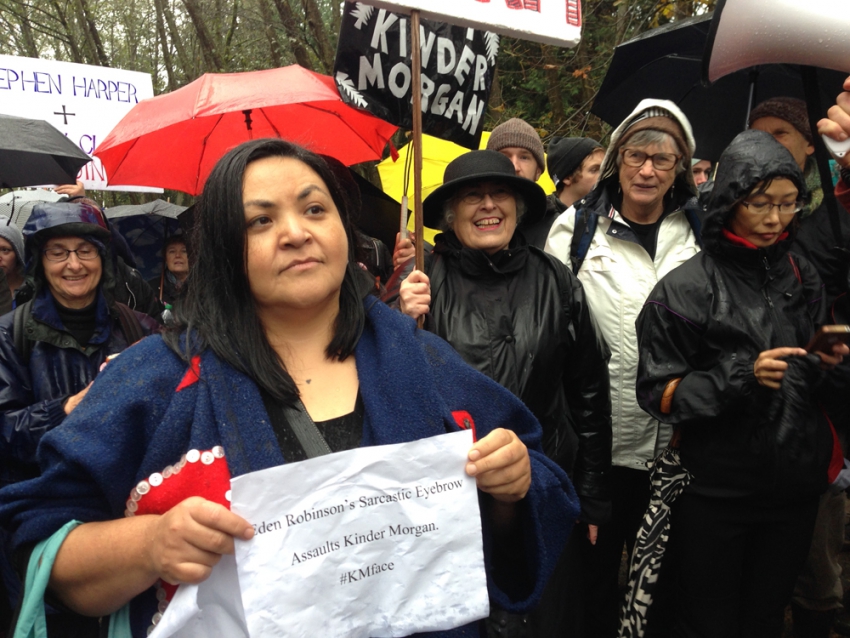 As the protesters wait for Sut-Lut's blessing, Eden Robinson gives Kinder Morgan her sarcastic eyebrow.  Al photographs in this piece are by Carrie Saxifrage.

Each day on Burnaby Mountain is a morphing creature that slowly gains shape. Then it recreates itself all over again because circumstances have changed. There are consistencies: deep mud, moments of confusion, courage, grace, tears in the eyes and a sense that history is being made.  The goal is to stop the Kinder Morgan pipeline from transporting bitumen from Alberta's tar sands to Vancouver's coast.  The plan to "twin" the Trans Mountain pipeline has been controversial since it was first proposed.

On Tuesday morning, I climbed up from Ridgeview Drive on a grey pebble path to the soggy encampment of blue tarps in the pouring rain. The scene was an amazing B.C. snap shot. Three people sat cross legged in meditation at the edge of the police barrier. Inside the barrier, two First Nations men worked on a totem pole next to a chain link fence that protected the core driller, which looks like a well drilling rig. Along the perimeter a yellow “Caution” tape ran parallel to the police barricade tape. On it hung bright pink signs that read “Climate crime scene.” 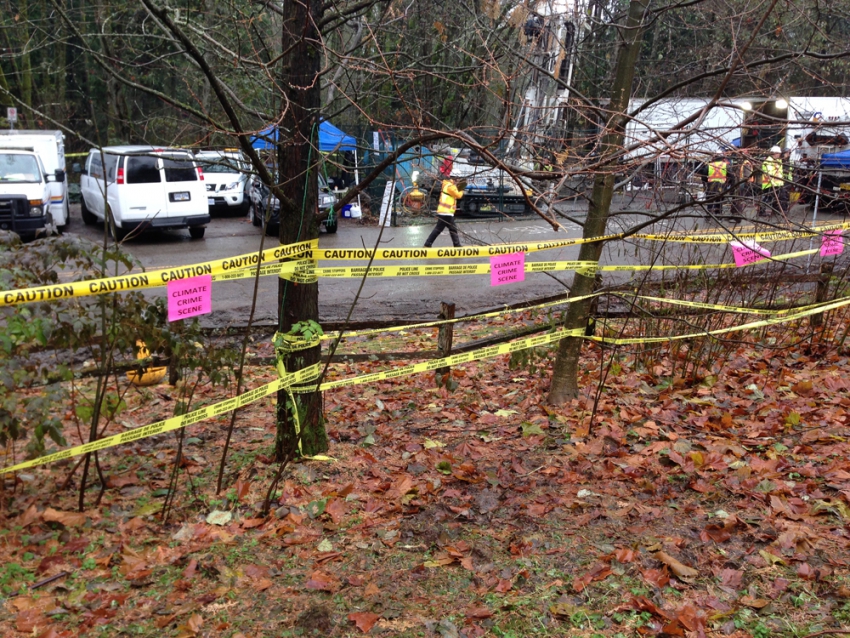 Down along Centennial Way a growing cluster listened to people speaking. It was the usual climate rally: eloquent speeches full of the frightening facts that confront those who pay attention; the exclusion of citizens from government processes; the exclusion of climate change from NEB processes; Canada’s free fall in the international community.

The people who had decided to be arrested that day identified themselves. They went to a different group where they were briefed regarding the sequence of events that had occurred on other days: the ride in the paddy wagon to the Burnaby RCMP station at Deer Lake; the few hours alone in a chilly cell wearing the one layer of clothing that was allowed; the likelihood of a hearing date on January 12. People who hadn’t brought their ID or had plans for mid-January dropped out. Seven remained.

Activists from Clayoquot Sound described the consequences of their arrests over the years: they travel freely to the U.S. and abroad; they haven’t had difficulty getting jobs; it doesn’t show up on criminal record checks. Technically, two years in jail is possible but no one has served anywhere near that time. Some leaders got a few weeks of jail time and many got fines or community service. “We can only tell you about similar events in the past,” someone else said. “Only you will bear the consequences of this decision.”

The main group had swelled to about one hundred people. They marched up the hill with an air of diligent resignation that these were the tools that remained to them as citizens. 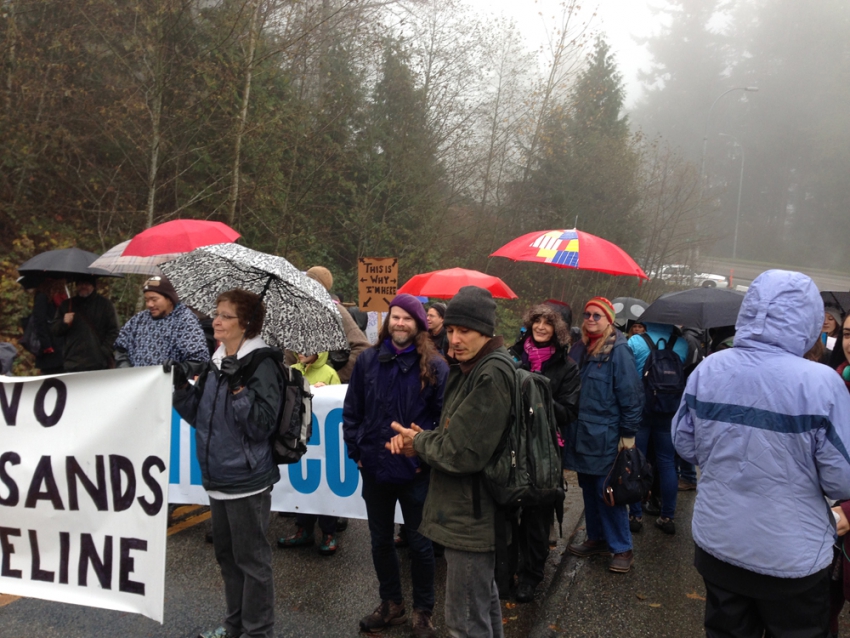 About twelve RCMP officers waited at the top behind the yellow police barricade ribbon, alert, no eye contact. The people who had decided to commit civil disobedience wanted to get the thing done. But Rhyno, one of the men staying at the camp, called to the crowd, “Do you want to do this as settlers, or do you want to do this with the blessing of Sut-Lut and respect for First Nations?” People settled in to wait for Sut-Lut, who keeps the sacred fire at the camp. The police were going to let her through the taped boundary so she wouldn’t have to walk on the path of mud and sticks above the road. But she didn’t appear. One person said she was praying. Someone else said she was on her cellphone. A young woman tearfully implored the police to protect the people, not the corporations. Clayquot chants were dusted off and presented. Poetry composed that very day was recited. Still, Sut-Lut didn’t come.

Eden Robinson, author of Monkey Beach, suddenly appeared in a button blanket, full of power and good cheer, with a sarcastic eyebrow for Kinder Morgan, a bag of food for people at the camp and a poem to read.