Enbridge is canvassing door-to-door in a well financed, high-stakes campaign to swing a key vote to bring an oil pipeline to the B.C.'s coast. Third in a series. 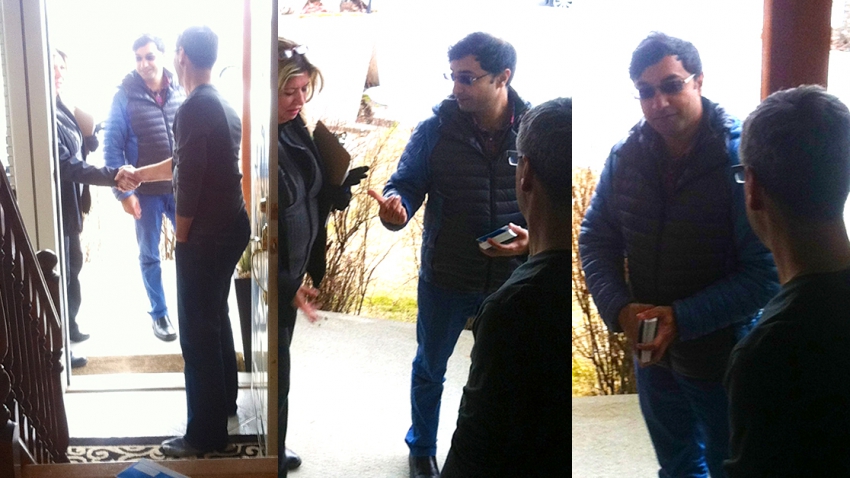 With a deeply unpopular $6.5 billion Northern Gateway project at risk, Enbridge is betting heavily on ads and a door-to-door corporate campaign to sway residents in a small northern coastal B.C. community to "vote yes" for its oil sands pipeline project.

"It’s mind boggling how they’re pouring so much into [the Enbridge campaign]... trying to influence a plebiscite here in little Kitimat on the north coast of B.C.,” said Murray Minchin of Douglas Channel Watch.

The pipeline would terminate in this community, gushing half a million barrels of Alberta bitumen per day, onto 220 super tankers per year bound for Asia. 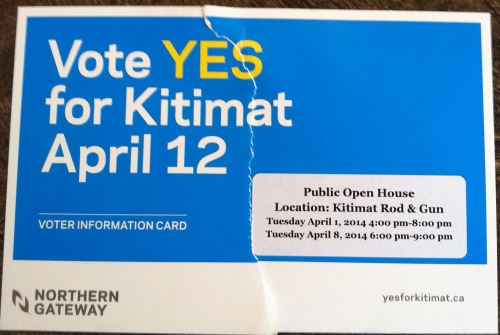 The company's blue and white "vote yes" political signs are up, local TV and radio and newspaper ads have been bought, and doors are being knocked on by corporate canvassers.

“It’s very much feels like a municipal election and everybody has the right to do what they want to promote their cause," said Kitimat's Mayor Joanne Monaghan on Monday.

But in this electoral race, there are no political parties.  Surreally - on one side, there's Enbridge - a giant pipeline company financed by oil sands developers and two Chinese-state oil companies (Sinopec and Nexen).  And on the other side, there's thinly-budgeted-volunteer groups, meeting in living rooms to strategize and make road signs.

"And as quickly as we put up signs, Enbridge started putting up their signs, right besides us," said Lucy McRae, with Douglas Channel Watch on Tuesday.

Douglas Channel Watch volunteers put up a "Vote No" sign in Kitimat on Sunday.

Controversially, the district said there are no rules on campaign spending, and "extremely new residents" living just 30 days in the community, are eligible to vote.

Member of Parliament Nathan Cullen said Enbridge's ad budget is likely in the "hundreds of thousands" of dollars, he said from Ottawa on Monday.

Though it's not clear if an Enbridge win in the April 12th non-binding plebiscite would advance the pipeline, it would certainly help the company's embattled PR efforts, hammered for years by hostile opposition from local governments, fishing associations, First Nations, environmental groups, hunters -- even TV stars.

A trio of Enbridge staffers, including Donny van Dyk, were presenting to seniors on the economic benefits and safety of the pipeline.  (A request to obtain the presentation was not responded to by the company.)  But among the crowd of 40, hecklers interrupted and blasted hard questions at Enbridge.  Some were asked to tone it down.

“I thought it was a snow job.  The three people from Enbridge said nothing negative could ever happen in Kitimat.  It was all positive spin.  An oil spill would never happen, that sort of thing.”

When someone also asked how many oil spills the company has had, Hill said Enbridge staff reported they “didn’t have that information.”

Enbridge did not respond to repeated requests for comment, made by phone, e-mail and in this Tweet:

A Kitimat reporter said Enbridge is not responding to that outlet's media requests either.

Enbridge's executive VP and poster-woman, Janet Holder, has long stated she wants an "open dialogue" with British Columbians about the benefits of her company's project.