The 'rare' summer legislative session is an attempt to slide a questionable LNG deal past a vacationing public, say critics. 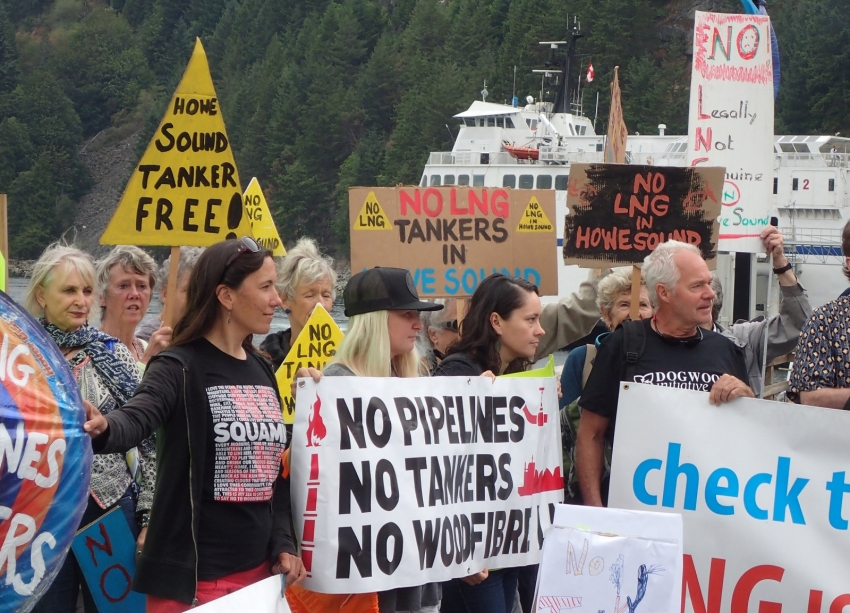 Demonstrators took to the land and sea last week to protest the prospect of an LNG plant near Squamish. Photo by Tim Turner

When Christy Clark ran for election in 2013, she promised that developing B.C.’s liquefied natural gas industry would help pay off provincial debt, and in time, generate 100,000 jobs and $1 trillion in economic activity.

Last month, her government announced a rare summer recall of the legislature to pass a law that would enable the province’s first LNG project, a special session that began today.

But as the political showdown begins on approving the controversial Pacific NorthWest LNG project, critics are calling the timing of the debate a “desperate” attempt by the BC Liberals to pass legislation while the public enjoys its summer vacation.

“The real reason for the timing is to try and get it out of the way while nobody’s paying attention," said Martyn Brown, political advisor and chief of staff for former B.C. premier Gordon Campbell. Brown wrote a column in the Georgia Straight Monday morning detailing the fiscal foolhardiness of the tabled legislation, which proposes an unprecedented 25-year tax holiday for LNG proponents.

"They also don’t want the time it would take to study and scrutinize this bill between now and the fall -- they want to get it out and down before people can find out what’s in it."

Debate on Pacific NorthWest's LNG's project development agreement (PDA) is expected to last for roughly two weeks as MLAs go over the merit of the US $36 billion-initiative, which has already been rejected by a number of local Indigenous groups.

They will also debate Bill 30, the Liquefied Natural Gas Project Agreements Act, which offers protection from energy and environmental taxes as a trade-off for creating jobs and revenue in B.C.

Contrary to the BC Liberals’ meaty LNG employment promises in 2013 however, the project is expected to create less than 5,000 jobs at peak construction, and only 300 long-term operational jobs. If approved, it would generate about $8.6 billion in provincial revenue by 2030 through taxes and royalties.

The numbers don't add up with Voters Taking Action on Climate Change (VTACC), which said the government is making a serious mistake by rushing this legislation ahead.

"We’re giving away a precious resource for a pittance," said Kevin Washbrook, executive director. "The revenue that we’re going to bring in from this is minuscule over the lifetime of the project and the number of jobs are a pittance as well."

And the government isn't only taking advantage of a distracted public eye, said Andrew Weaver, Green Party MLA for Oak Bay-Gordon Head; the summer recall is an eleventh-hour attempt to make good on at least one of Clark's failed campaign promises.