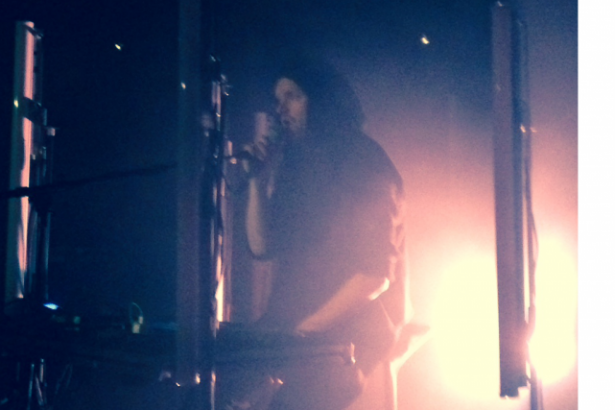 SOHN is the stage name of Christopher Taylor, a Vienna-based English musician. Most often compared to James Blake, SOHN's sound is a mix of electronic, pop/RnB, and indie soundbytes, all layered around and against voice you can't forget.

He made waves in late 2012 for his debut song "the Wheel," a fascinating track that uses his voice--modulated and reverberated to follow a cyclical pattern--as the only instrument, as he builds layers to the mournful melody. The hype grew towards the release of Tremors this April, an album that, unfortunately, focussed less on Taylor's singing and more on the hooks he laces around that voice. The result was something closer to pop and less to the ghostly soundscapes that made "the Wheel" so compelling.

But he kept some of that ghostly nature for the actual performance. After an opening set by the pretty straightforward Mr Little Jeans, SOHN finally made his appearance.

But he didn't seem to 'appear' so much as suddenly materialize from the darkness. With  a black cowl covering most of his face and four bars of light blinding out the rest of his body, Taylor was intent on staying hidden from the crowd.

In the same way, his electronic tunes acted as a cloak around his voice. It wasn't like he had something to hide, though. It was more like listening through a dream, where nothing's as it seems.

With stage lights shifting between star-blues and twilight-purples, the concert had a drifting quality--one long lullaby, really, bringing us through the dream. And Fortune was the perfect venue for it: that rare Vancouver club that has a proper soundsystem while still having an intimacy an artist like Taylor needs. The whole crowd squeezed to the front without pushing: really, we just kind-of swayed to it all.

Despite the unique nature of the music, the concert itself followed a strict formula. SOHN currently has four 'well-known' songs: two of them he opened the show with, and two were used as the encore -- an obligatory one after the band hung around back stage for two minutes. Clocking in at a little past fifty minutes, the concert had a blink-and-you'll-miss-it kind of effect. Maybe it was the lullaby his signing created, but I woke up from his set thinking "wait, what? That's it?"

Near the end of the show SOHN thanked the crowd for the show. It was the first-- and last-- thing he said to us all night. It's okay, we get it: small venue on a Tuesday night, that's exactly the type of show that might send you through the rock-steady motions. And with only twelve songs of his own under his belt, you can see why he might not have felt comfortable with going longer than the actual length of Tremors.

Or, maybe it's the awkward mix of genres he falls into. With all his different influences, Taylor still seems unsure how to create a consistent live experience. His performance was caught between a rock concert and a DJ set: combining the "just press play" aspect of an electro show, and the strict 3 minute song-set of a rock concert. And when you lose the improvisation that comes with DJ-ing and the organic nature of real instruments, SOHN's performance came off as slightly artificial. His voice was the only 'real' thing about the concert.

That voice, though. It has a purity to it that seems effortless -- a grace to it that shines through whether Taylor was actually into the show or not. As much as his cowl cloaked him, as much as the electronic choked his sound, that voice rose above it all. It picked us up and made us swoon, brought us into the dream and brought us out with equal finesse.

Maybe it's a dream that was a little too short. But hey, I'll line up to have it again anytime.