Site C project not in keeping with constitution or UN declaration: Bellegarde 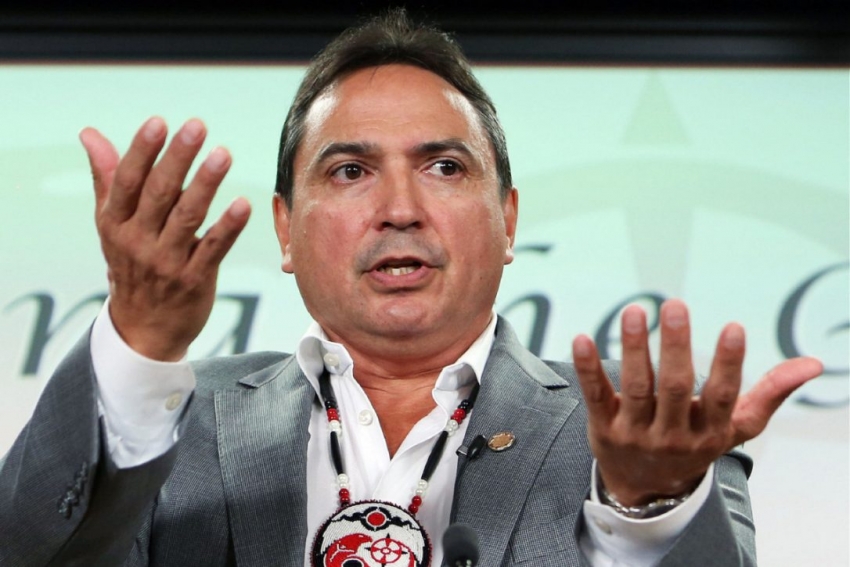 The federal government's approach to the Site C dam project in British Columbia is not in keeping with Canada's constitution nor with the UN Declaration on the Rights of Indigenous Peoples, says Assembly of First Nations National Chief Perry Bellegarde.

The multi-billion dollar project — a proposed dam and hydroelectric generating station on B.C.'s Peace River — would create an 83-kilometre reservoir and flood farm land along with traditional First Nations territory.

"Why don't they respect and follow their own constitution? Section 35. Existing aboriginal treaty rights," Bellegarde said in an interview with The Canadian Press.

The project also goes against Trudeau government's pledge to have a nation-to-nation relationship, Bellegarde added, noting it involves flooding a valley where indigenous people have lived, hunted, trapped, fished and gathered medicines.

"It really comes back to building a healthy, respectful relationship with indigenous peoples and we just don't see it happening here in this instance," he said.

The Prime Minister's Office did not respond to a request for comment on Bellegarde's remarks. Justin Trudeau has repeatedly expressed his commitment to make indigenous issues his number one priority and has promised to recognize their inherent rights.

The national chief's comments come ahead of a key Federal Court of Appeal hearing on Site C scheduled for Monday in Montreal.

Members of the B.C. First Nations involved in the Site C challenge are currently travelling across Canada to Montreal and plan to hold a rally ahead of the hearing.

The court case involves two B.C. First Nations — Prophet River and West Moberly First Nations — against the federal attorney general, the federal ministers of the environment, fisheries and oceans and transport as well as the B.C. Hydro and Power Authority.

The appeal pertains to the 2014 federal approval for the project following an environmental assessment conducted by Ottawa and the B.C. government.

B.C. Premier Christy Clark has championed the Site C project, noting it will be a source of affordable and clean power for more than 100 years.

At the end of July, the federal Fisheries and Oceans Department also granted permits allowing construction on the dam, generating station and other associated operations to proceed.

On Friday, the department said this decision was made after it had completed a review under the Fisheries Act that included "extensive First Nations consultations."

"The project will have impacts on fish and fish habitat and for that reason the government is requiring B.C. Hydro to take steps to reduce and offset the project's potential effects on the Peace River," it said in a statement.

"There are more than 40 specific conditions as part of the authorization which must be adhered to ... if these prove insufficient, Fisheries and Oceans may add further conditions during the project."

This approach has not calmed critics.

Harms associated with Site C include the inability of First Nations to exercise treaty and constitutional rights, according to Amnesty International Canada.

"Indigenous people anywhere in Canada should be looking at this case with great concern because if the federal government is prepared to approve this project ... what's the limit?" said indigenous rights campaigner Craig Benjamin. "Is there any project that they wouldn't approve?"

In August, Environment Minister Catherine McKenna announced the establishment of an expert panel to review federal environmental assessment processes. Her office has noted it will not backtrack on previous approvals.

"The country's reputation is at stake with approval of these projects like Site C, like the Enbridge pipeline," Wilson-Raybould said in remarks recorded and posted on Youtube.

The minister's office did not respond to a request for an updated comment on Friday.

"An important aspect of our constitutional law today (is) that you need not only to consult but to accommodate the concerns that were expressed in that consultation," Saganash said.