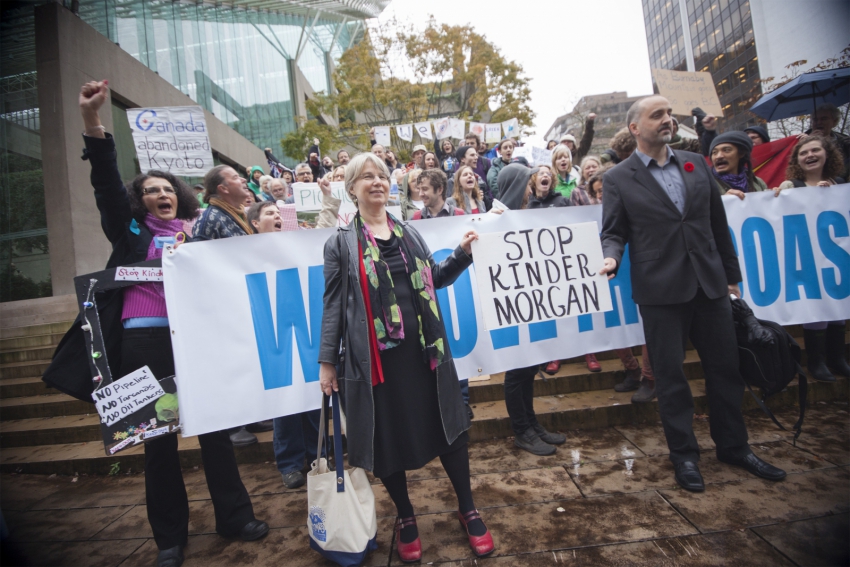 (in front of banner) SFU professors Lynne Quarmby and Stephen Collis outside the B.C. Supreme Court on Wednesday - photo by Mychaylo Prystupa.

More than 300 faculty, librarians, staff and students at Simon Fraser University have signed a letter in support of two SFU professors currently at the heart of a legal attack by Texas-based Kinder Morgan, over a contentious pipeline project on Burnaby Mountain.

Biochemistry professor Lynne Quarmby and literature professor Stephen Collis were named as defendants in a high profile injunction application and civil suit designed to prevent people from interfering with the company’s survey work for the Trans Mountain pipeline expansion.

The instructors, along with other citizens named in the case, could be facing fines, or damages in the millions of dollars claimed by the company.

“There’s a lot of people on our campus… who are just outraged by the [Kinder Morgan] court case,” Pavsek said Thursday.

“I think most people are opposed to the pipeline, but what really enrages them is the strong handed tactics the company seems to be taking,” he added.

Quarmby, who ordinarily spends her time studying pond biology, was flattered by how "microbial" the story has gone -- if you'll forgive her biochemist pun for "viral."

"I'm happy people are seeing what we're doing and helping us chase this bully out of town," she said Thursday at the B.C. Supreme Court.

"We understand there are many opinions about the project and will continue to listen and engage with those interested in the project.  To date we've had more than 1,200 face to face meetings, open houses and interactions," said Ali Hounsell in an e-mail Thursday.

A second letter also urges the President of the university to take a public stand in support of the two professors’ “rights to protest peacefully and to gather on public land.”

Pavsek says the effect of Kinder Morgan's legal action "will be to silence legitimate opposition to the expansion of the Trans Mountain pipeline."

"We oppose the use of the legal system by powerful and wealthy companies to constrain the public's right to protest," he wrote. 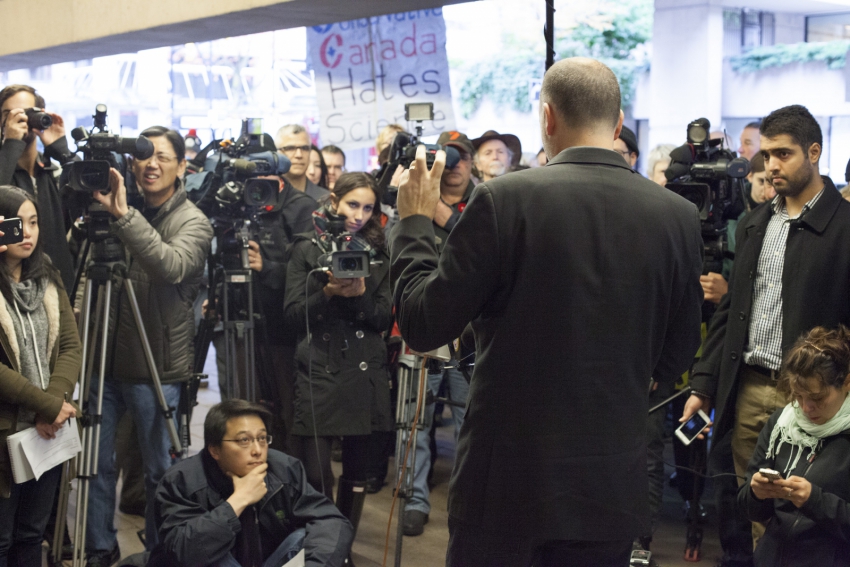 Professor Stephen Collis has taken on a key role in speaking to the media regarding citizens’ opposition to the pipeline.  The company seeks to test the feasibility of burrowing an underground tunnel for the last leg of its proposed Edmonton-to-Burnaby oil sands pipeline.

Likewise, Professor Lynne Quarmby wrote an op/ed in the Vancouver Observer recently expressing her willingness to be arrested to stop the pipeline project.

Both appeared in the high profile B.C. Supreme Court case this week, speaking to large crowds outside the court building in downtown Vancouver.

Pavsek says Kinder Morgan made a strategic error in naming these two professors in its court applications.  The reaction it has caused on campus appears to have earned the company more detractors, he said.

“It’s been a pretty galvanizing thing that Lynne and Stephen were named in this legal action,” said Pavsek.

So far, the SFU President Andrew Petter has not responded to the letter – something Pavsek says is “disappointing.”

“One of the stated missions of the university is to promote community engagement.  And if there are two members of the SFU faculty that are expressing that to perfection, it’s Lynne and Stephen.  They are exemplifying what our university is suppose to be about,” added Pavsek.

In court records, Kinder Morgan is claiming it will lose $80 million for every month its pipeline project is delayed.

A third person - Mia Nissen - is an SFU admin worker.  She is named as a defendant in the legal proceedings as well, for her alleged actions interfering with Kinder Morgan work crews.

The Vancouver Observer requested comment from SFU's president on Thursday afternoon.  When a response arrives, we will add it to the article.

Officially, Trans Mountain is asking for an injunction barring protesters from blocking its crews from doing survey work at the Burnaby Mountain Conservation Area Park.  The company is also asking for damages and costs in a civil lawsuit over what it claims is trespass, assault and intimidation by protesters who chased away workers.

“Our preference is to work cooperatively, and we respect the right to peaceful protest. However, we are required by the NEB to complete these studies in order to support our application, and we are pursuing our legal options,” a Trans Mountain spokesperson wrote this week.

The $5.4-billion Trans Mountain pipeline expansion would triple the flow of Alberta oil that is currently transported on the company's decades-old pipeline.  The project would enable more than 400 super tankers per year to be loaded at a terminal not far from SFU's Burnaby Mountain campus. 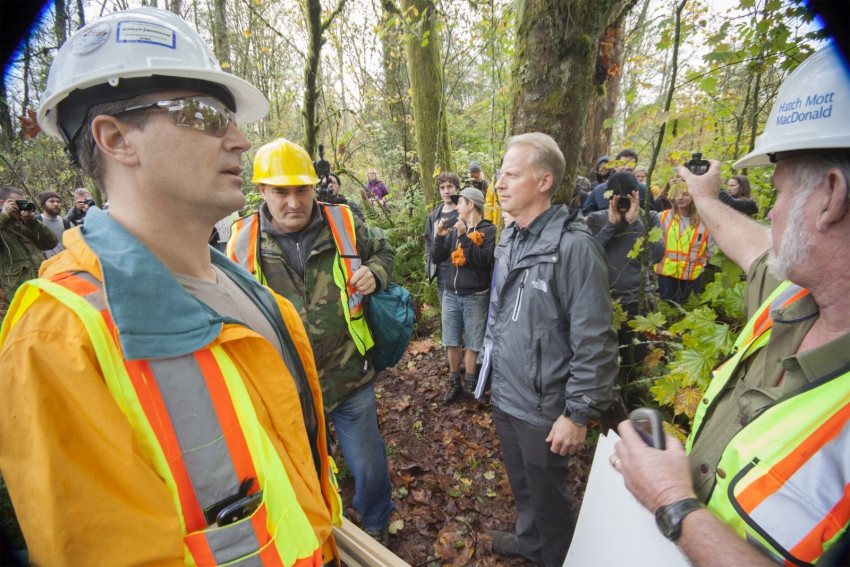