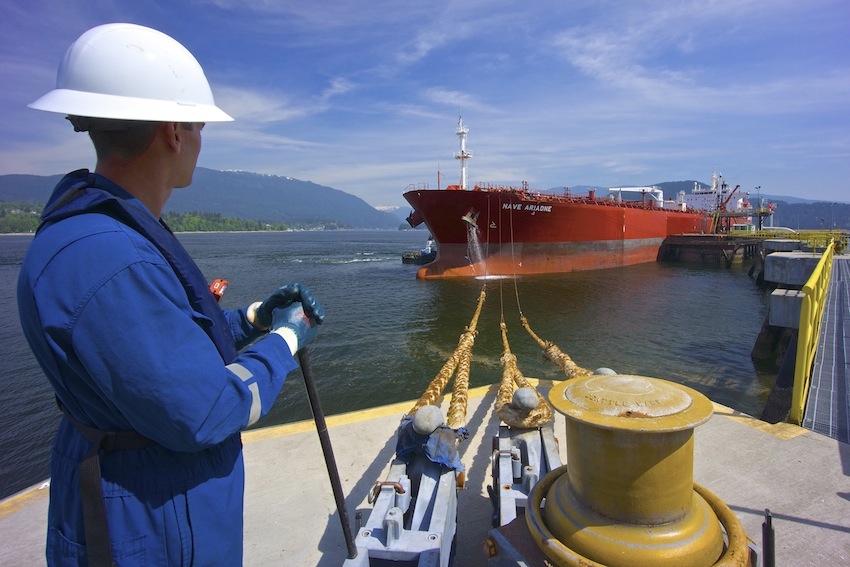 Oil tanker at Kinder Morgan Westridge Terminal in Burnaby
Economist and former ICBC CEO Robyn Allan challenged the B.C. government to announce its own review process of the Kinder Morgan Trans Mountain pipeline. Allan — one of Canada's most prominent critics of raw bitumen export pipelines — publicly withdrew as intervenor from the Kinder Morgan Trans Mountain pipeline review on Tuesday, calling the federal National Energy Board hearings "rigged" in Kinder Morgan's favour.
"The B.C. government is complicit in this process," she said, noting that the Clark government had signed an equivalency agreement to accept the National Energy Board's decision on pipeline decisions, instead of
conducting its own review process as provinces such as Ontario do.
"We know the B.C. government could do it in 30 days if they just wrote a letter to the federal government, but they refuse," Allan said, referencing a clause in the Environmental Assessment Equivalency Agreement stating that "either party may terminate this agreement upon giving 30 days written notice."
Allan said she had started the Kinder Morgan Trans Mountain NEB review in "good faith," but that she was shocked to learn early on that the NEB review had changed to rule out oral cross-examination, which she viewed as an essential part of the hearings process. She added that the NEB's hearings for Enbridge Northern Gateway were far more fair, inclusive to the public and included cross-examination of witnesses.
With an expertise in insurance and economics, Allan raised concerns around the Trans Mountain expansion such as the economic benefits lost by exporting raw bitumen, the potential conflict of interest of oil corporations' ownership of spill response companies, and the lack of documentation around meetings between Kinder Morgan and the federal government.

When asked for comment, Premier Christy Clark's office referred questions to the Ministry of Environment.
Ministry of Environment spokesperson Danielle Bell, however, confirmed the B.C. government would not be cancelling the NEB equivalency agreement, and would not be conducting its own review.
"We have five conditions that any heavy oil pipeline project must meet and, if they don’t, we won’t support the project," she said. She added that the province will seek information from "all appropriate channels" to see if the five conditions are being met, but didn't specify what channels would be consulted.
She said the B.C. government would also participate as an intervenor in the NEB review, and said " Kinder Morgan has committed to consult with the province, as well as other parties, in developing their Emergency Management Program."
The B.C. government came under fire in mid-January after saying it wouldn't pressure Kinder Morgan to share full details its emergency management plans. The B.C. government had asked Kinder Morgan for the plan in December, but the company denied the government's request for "personal, commercial and security reasons."
The NEB ruled in Kinder Morgan's favour, saying the company already shared "sufficient information."
After backlash, Premier Christy Clark B.C. started demanding Kinder Morgan release their emergency spill response plan.
Allan said one way citizens could demand a fairer pipeline review process was to make sure the next elected federal government changes the NEB review process to be more rigorous and more inclusive to public participation. Currently, the federal election is slated for October, while the NEB report on Kinder Morgan's Trans Mountain expansion is expected in July 2016.