Amid calls for his resignation, curious robocalls in Vaughan fuel rumours that Veterans Affairs Minister Julian Fantino may soon be leaving the Harper government. 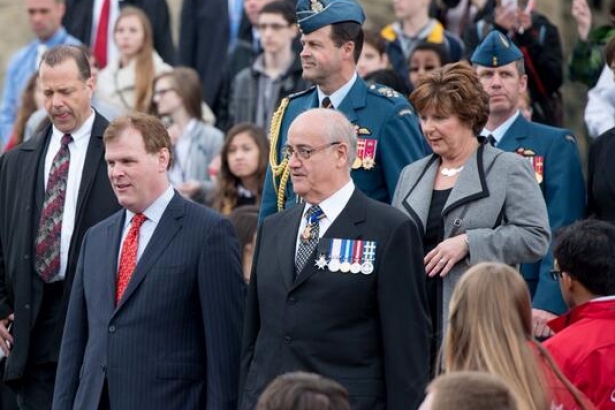 Mysterious robocalls in Ontario have people wondering if Veterans Affairs Minister Julian Fantino is considering his future after federal politics, the Vancouver Observer has learned.

Residents of Vaughan, Ontario -- a suburb North of Toronto -- received robocalls surveying their likelihood to vote for Fantino as Mayor of Vaughan in the municipal election slated for October 27, 2014.

Multiple sources in the region confirm that the calls were received shortly after 7:00 p.m. local time on May 15 and asked residents whether they would vote for Fantino, or the incumbent Vaughan Mayor Maurizio Bevilacqua. A recording of the call was also provided to the Vancouver Observer.

"I was surprised to get this call. And to hear that Fantino appears to be running for Mayor of Vaughan. The robocall poll only listed two people -- Mr. Fantino and Mr. Bevilacqua -- and it asked who I would vote for, Fantino or Bevilacqua," said Vaughan resident Carrie Liddy.

"It looks like they are getting ready to run a campaign for Fantino in Vaughan and they are testing the waters to see if the public is favourable to electing him as Mayor," said Liddy.

Sonia Meucci was also 'shocked' when she heard the minister's name in the call.

"I normally hang up on these calls, but because we're having a provincial election, I stayed on the line," she said. "It said they were conducting a poll for Vaughan which seemed out of the ordinary. When I heard Fantino's name as a future Mayoral candidate -- I was shocked, because he's a federal minister," said Meucci.

'Every intention' to continue as Veterans Affairs Minister

Despite strong calls for his resignation earlier this year from veterans, Fantino has steadfastly maintained he would not step down. The Minister did not respond to media requests, but Nicholas Bergamini, Fantino's press secretary said:

"I don't know where you got it from. I don't really care, and it is completely off base -- don't waste your time. This is categorically false. Minister Fantino has every intention to remain as the Member of Parliament for Vaughan, and in his role as the Minister of Veterans Affairs".

Fantino is currently the Conservative Member of Parliament for Vaughan -- a riding once held by Bevilacqua with the federal Liberals until 2010. Liberal sources state that the calls were not associated with Bevilacqua. Neither Fantino or Bevilacqua have formally registered as candidates in the Vaughan municipal election.

According to Grassroots’ website, company principal Peter Seemann “has been involved in Canadian politics since 1993. Through his political activism, Peter has forged many strong relationships within the current federal Conservative party and the Progressive Conservative Party in Ontario”.

When reached for comment about the robocall, Seemann wrote:

"We do work for a variety of clients on three levels of government. The question you refer to was only one of several related to the current municipal race in Vaughan. We do not disclose information on who we are doing research for."

Fantino has been heavily criticized for his role as Veterans Affairs minister, with calls for his resignation after showing up over an hour late to a meeting with veterans in Ottawa in February, resulting in an explosive and emotional press conference lambasting the minister.

The federal government has come under fire over the recent closure of eight regional Veterans Affairs offices, and also over the ongoing debate about the mental health services available to vets and compensation for injured soldiers.