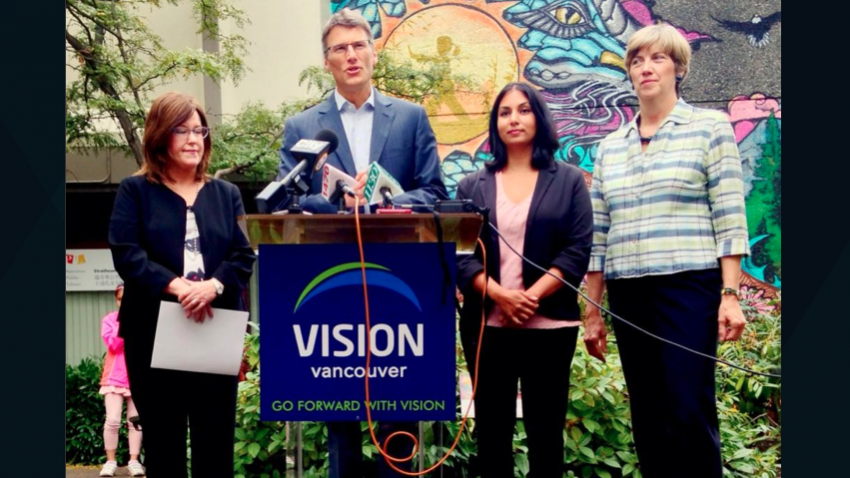 "In a city as prosperous and compassionate as Vancouver, there is no reason why any kid should go to school hungry," said Mayor Gregor Robertson at Strathcona Community Centre earlier today.

"Reducing child hunger is a straight-forward way to enable our kids to succeed in school and build a healthier, stronger, more compassionate city," he added.

Vision Vancouver announced plans for a $400,000 investment into the Vancouver School Board's breakfast program, which is currently operating $60,000 in the red.

The Breakfast Program currently reaches 650 students described by the VSB as "vulnerable", across 12 of Vancouver's elementary schools. So far, the money has been coming in via charitable donations.

Vancouver is a very rich city, but the wealth is not divided evenly. The difference between rich and not-so-rich is starkly evident when it comes time to raise a child and put her through school.

"Vancouver public schools are among the best in the country, but many of our kids start the school day with the odds stacked against them," said Vision School Board Chair Patti Bacchus. "A warm, nutritious meal to start the day is a simple yet hugely effective way to help our kids succeed. The VSB Breakfast Programs are one of the most effective tools we have to reduce inequality and make sure our kids get the support they need."

Under the newly-announced plan, the program will double in scope to reach 1,300 students with food meeting the provincial healthy eating guidelines. The VSB has previously described these breakfasts as costing less than $2 each.

Me 7/14:“I went to school hungry. In a city as rich as ours no child should do so any longer." Welcome to the idea @VisionVancouver #vanpoli

This is hardly a wedge issue: nobody has yet publicly argued against feeding the kids who need feeding. The fact that this is an election season, though, has not escaped notice; at least not on Twitter. Anything a governing party does will be examined through that lens.