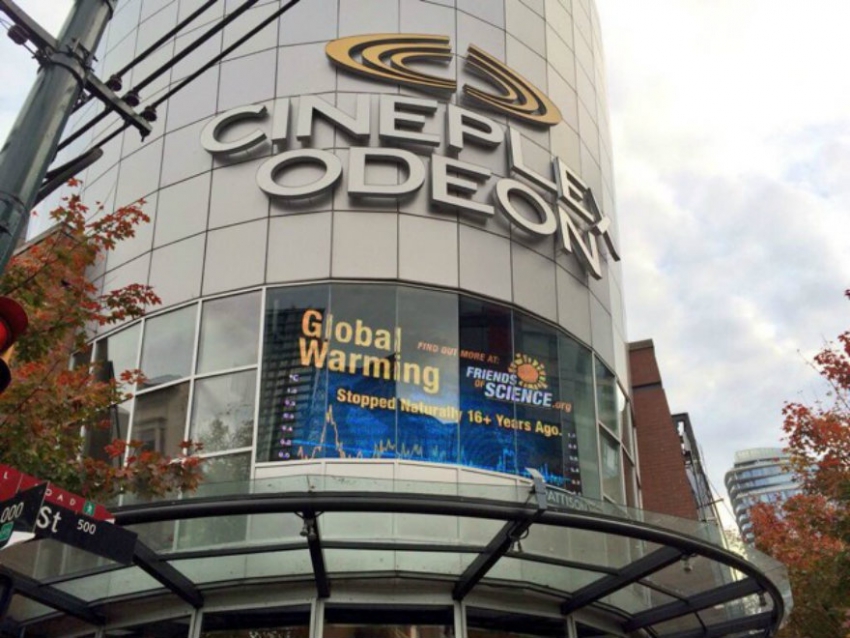 "Global warming stopped naturally 16 years ago", the ad claimed, with a graph in the background appearing to depict stabilized temperatures (which critics say is "misleading" due to its emphasis on short-term data)

Friends of Science, a Calgary-based nonprofit group that disputes climate change, bought the ad.  They argue that the sun is the main driver of global warming. The billboards were part of a national campaign that ran in 6 cities across Canada from November 3 - 30.

The advertisement apparently cost $15,000 at a nonprofit rate.  Critics have accused Friends of Science as an 'industry front group' trying to dispel public concern about climate change.

"We’re not funded by Big Oil," Friends of Science spokesperson Michelle Stirling told The Vancouver Observer. "Big Oil hates us. They run the other direction — just look at every one of their websites. They believe in climate change. Many of the companies are snuggling up with [David] Suzuki."

Friends of Science's ad campaign has sparked a complaint from Clean Energy Canada director Merran Smith, and is targeted by a petition on Change.org to have Pattison Outdoor remove the billboard. Forty-seven complaints about the ads have been filed in Quebec through the Ad Standards Council.

"There ought to be an instrument that punishes companies that profit from the imminent destruction of humankind. You would hope for some level of corporate responsibility that would have spared us from this," he said.

Littlemore said he can't understand why skeptics still want to keep the debate open on climate change.   And he pointed out that it was a strange coincidence that the sign appeared during the month that protests against the proposed Kinder Morgan pipeline expansion project had captured the public's attention.

"It isn’t about keeping an open mind -- It’s about keeping a vacant mind," he said. "The only way you can be confused about climate change is if you refuse to do the reading....The fact that people are lying about it in 2014 is indefensible."

"I honestly believe climate denial arises more out of delusion than intent. I think Jimmy Pattison (owner of the Jim Pattison Group) should be ashamed of himself...he should be accountable for what’s up on his sign."