Warmer coastal temperatures has created a food web similar to the one that exists off California, with smaller, lower-fat food sources available. 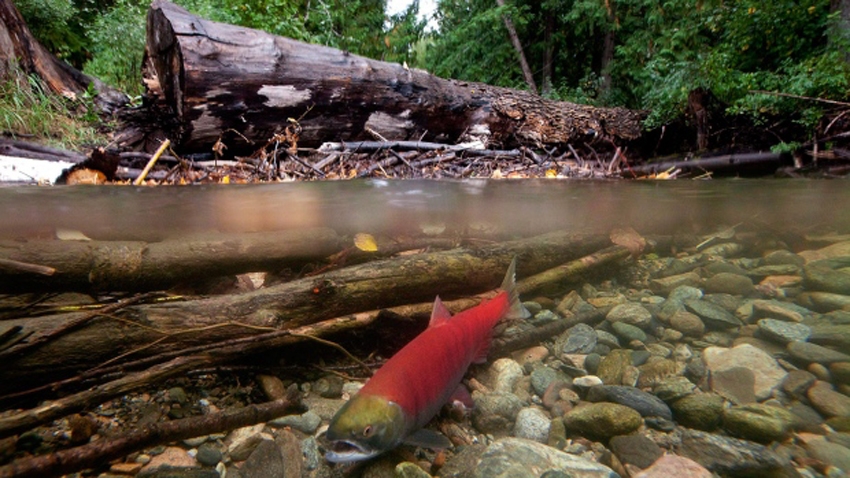 If the low levels of snow pack and rain continue, there will be reductions in spawning habitats like the Adams River, shown here. File photo/Canadian Press

Record-breaking temperatures along the coast of British Columbia will harm Pacific salmon for years to come, says the Fisheries Department.

Ocean scientist Ian Perry said the high temperatures were observed in the northeast Pacific Ocean during the Fall of 2014 and 2015.

He said they were highest the government has recorded since it began keeping records in 1948.

"These conditions, of course, being so unusual, cause changes in the marine ecosystem," he said in a conference call with reporters on Tuesday.

"They change the distribution and migrations of fish, including salmon, in the high seas and they change the food web that these fish feed on."

Perry said the temperatures threaten the survival and growth of juvenile Pacific salmon that entered the ocean this spring and fewer will return to B.C. to spawn in the next one to three years.

But he added the heat won't affect salmon that entered the sea before spring 2014 and scientists don't expect any significant impact to the numbers of those returning fish.

Perry said that cooler temperatures along B.C.'s coastline typically foster a large, fat-rich and nutritious zooplankton for salmon to eat.

But the warmth has created a food web similar to the one that exists off California, with smaller, lower-fat food sources available.

At the same time, there has been a rise in predatory fish swimming up from the south and salmon have been forced to change their migratory patterns, he said.

Patterson said that for example, the mean air temperature in the Central Interior has been about five degrees above normal, causing record-high water temperatures throughout the Fraser Basin for this time of year ­– already around to 19 to 21 degrees.

He added that in Hope, temperatures are 4.5 degrees above normal.

"If these conditions persist, too much stress will occur and ultimately lead to premature mortality."

A low snow pack and lack of rain have lowered river levels in B.C., forcing salmon to delay in areas that may not be suitable for them. If the low levels continue, there will be reductions in spawning habitats available, Patterson said.

But he said some stocks, such as sockeye and coho, are more vulnerable to temperatures than others including chinook and pink.