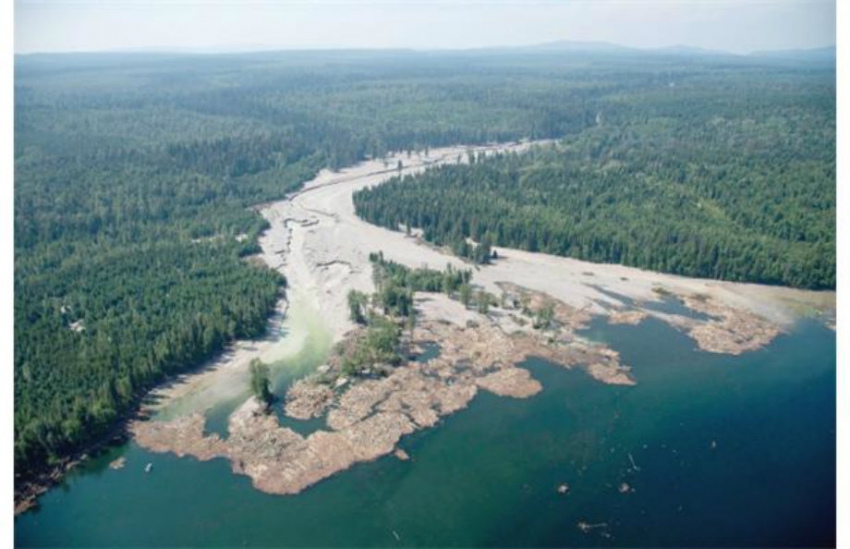 A lake in British Columbia likely survived a major pollution disaster when a tailings pond at the Mount Polley mine collapsed last summer, but it needs constant monitoring to track any long-term impacts, says a new report.

Researchers from the University of Northern British Columbia and the University of B.C. studied the massive sediment plume of waste and water within Quesnel Lake in the three months following the breach of the tailings pond at the open pit gold-and-copper mine.

UBC physicist Bernard Laval said Tuesday that mine tailings were likely flushed from the lake into the Quesnel River, but huge amounts sunk to the bottom and could leach over the years.

"My sense is Mount Polley got very lucky in that their tailings are relatively chemically inert," Laval said. "The concern is that metals will dissolve into the water and make their way into the food chain."

The study found elevated levels of copper concentrations in sediment samples and discovered a sediment plume at depths below 30 metres in the west arm of Quesnel Lake.

It also documented a lake level rise of almost eight centimetres and a temperature increase at the bottom of the lake of up to 2.5 degrees Celsius.

"The contaminant introduction, mobilization, and bioaccumulation may pose risks to 31 resident and anadromous fish stocks, which support recreational, commercial and First Nations 32 fisheries," the report said.

"The nature of waste materials now present in Quesnel Lake presents a potential hazard to the metal content of aquatic food webs and the growth, survival and behaviour of important fish species."

Laval said constant monitoring of the lake's water quality by governments and scientists would ensure potential impacts are immediately known.

She said elevated levels of metals have been found in the lake, but so far there are no signs that the mine waste is dissolving into the water. Polak said current testing indicates it's safe to eat the fish from Quesnel Lake.

Alaska's Lt.-Gov. Byron Mallott is set to tour the Mount Polley mine site Wednesday to view the aftermath of the tailings-pond collapse and gain evidence of B.C.'s commitment to preventing a similar mining disaster.

Mallott was dispatched by Alaska Gov. Bill Walker to register U.S. concerns about a threat that any future mining catastrophe in B.C. could have on waters flowing into that state.

Vancouver-based Imperial Metals (TSX:Ill), which operates Mount Polley, said it could reopen the mine in June if granted a permit.

Imperial Metals Mount Polley disaster could cost $500 million, but bonds only a fraction of this amount