The protesters want to negotiate with the City and remain at their camp, installed at Oppenheimer Park in the Downtown Eastside. 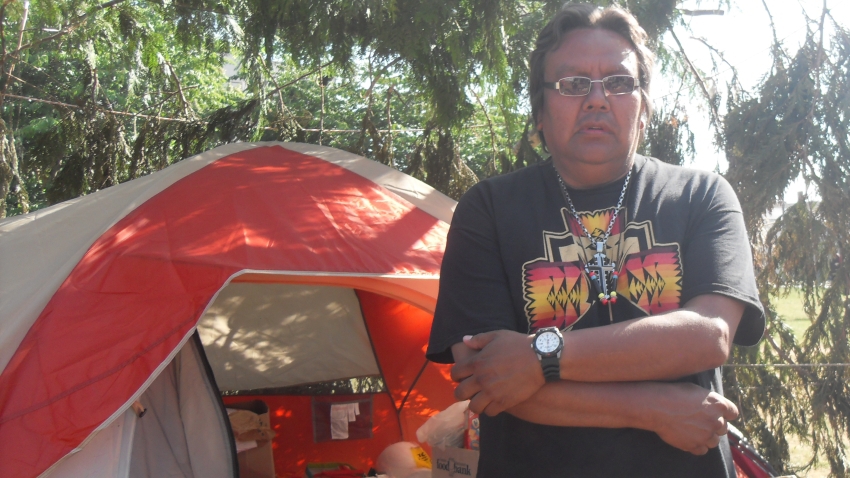 The leaders of a group of some 40 people who are camping at Oppenheimer Park, in the Downtown Eastside, headed to City Council on Tuesday to negotiate their housing conditions.

“This is not a camping trip,” said Lawrence Houle, one of the campers, who has been living at the park since last fall. "We need a permanent home, that’s what we are fighting for."

At 9:00 a.m. they arrived at City Hall. As soon as the Council meeting started, they circulated a motion with their demands. Mayor Gregor Robertson responded by saying that it is the provincial government’s duty to provide solutions for housing problems. Robertson also requested the protesters to move to a private meeting with Councillor Kerry Jang and City Manager Penny Ballem.

Before they moved to another room, Audrey Siegl, former resident of the Downtown Eastside and member of the Musqueam Indian Band, repeatedly asked: “Can you stop the eviction notices?”

“There’s no eviction notice. It is public land, and obviously we need to make sure that the whole community is able to use that land, and that’s our primary concern. Anyone who is on the land right now has access to housing, anyone who needs that help and support can get that,” the Mayor responded.

The discussion heated up, with both parties maintaining their positions.

A couple of hours later, when the meeting with Jang and Ballem was over, the campers said they were going to work together with the City in order to push the other two levels of government for funding.

Neither Jang nor Ballem could be reached for comment at the time. However, according to information published on Wednesday by Metro, Jang said later that the City is committed to fix urgent problems like the unsanitary conditions of some SROs.

Jang didn't mention anything about the campers' presence in the park. However, the protesters said they are allowed to stay there as long as they remove the tents and other structures. Washroom facilities will remain open for them, but no temporary toilets are going to be installed as they demanded.

The City of Vancouver had already issued a notice on Saturday. It said that all campers had to remove their tents from the park by early Sunday. That notice was immediately countered by another eviction notice issued by the protesters themselves, some of whom were of Haida and Musqueam descent. They asked the City to remember that they hold the Aboriginal Title for the whole area where the City is based, and that local officials should “cease any attempts to remove people or their belongings” from the park.

Representatives from town hall visited the site Monday night. They stayed on the premises for some time, then talked to both Brody Williams, a camp organizer from the Haida Nation, and Wendy Pederson, a longtime Downtown Eastside activist.

“That bought us some time. At least 24 hours,” Williams said at the moment.

When approached by the Vancouver Observer to comment on the campers’ demands and situation, one of the officials declined comment and asked media to contact the City’s communication office.

Councillor Kerry Jang had previously told CKNW that outreach workers are there to make sure “that those who have really poor housing or substandard housing can go somewhere else first before they are moved out.”

Rena Kendall-Craden, spokesperson for the City of Vancouver, said in the same story that people are working with BC Housing and the Evelyn Saller Centre to give temporary shelter for the campers.

She noted that the Downtown Eastside local area plan will result in improved living conditions at existing SROs. 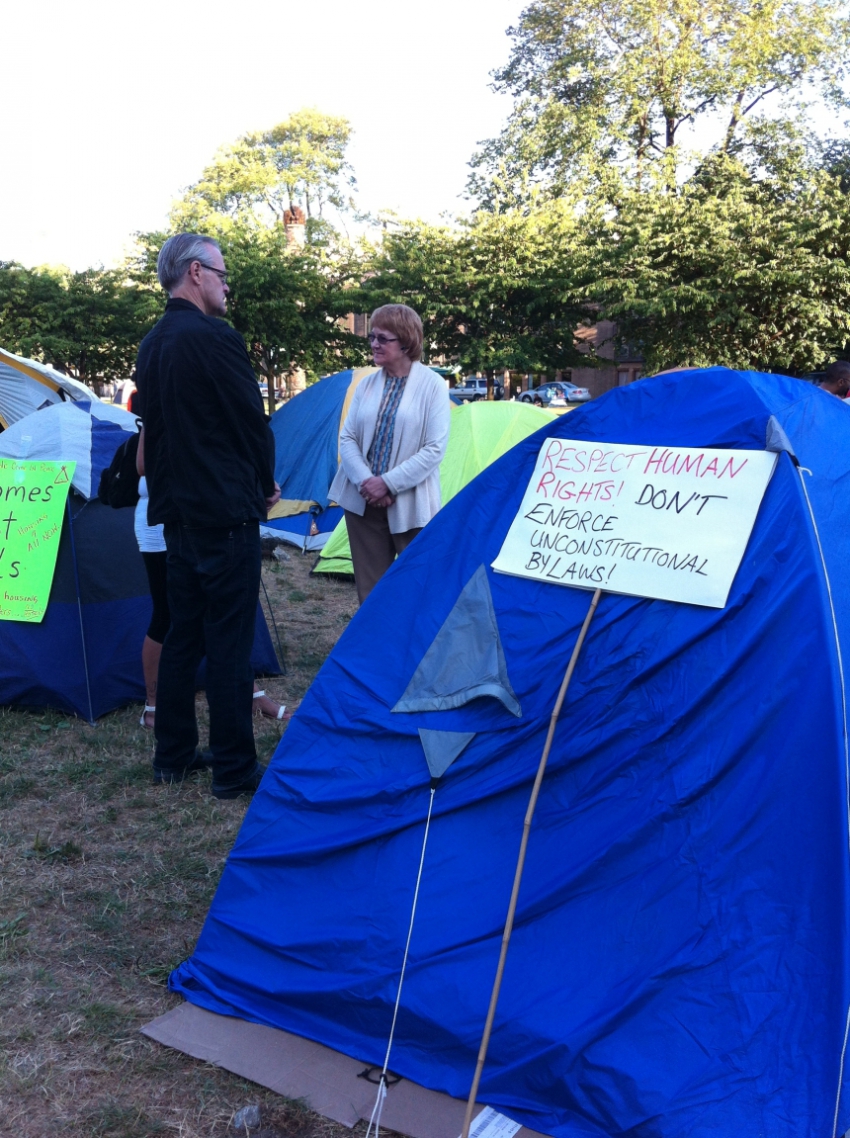 Not all people who are camping at Oppenheimer Park are homeless. Even the camp's organizer, Williams, admitted that he has a home, but he added that he’s staying there to support the housing cause which he has been fighting for over a decade.

“I’ve been going to the meetings over and over. I’ve hoped for the best but they just talk and talk,” Williams said. Still, he was moved to action, especially after learning that the number of people sleeping on the streets grew compared to 2013’s count.

“They are not going to move us away that easily...We are here to create pressure for subsidized housing,” Williams added.

As a way to justify their demands, Lawrence Houle said: “I’ve lived in three (SRO) hotels and they all had bed bugs, cockroaches, wolf spiders, and also mice and rats making holes through the walls. I caught 28 mice in one month.”

Houle moved to Oppenheimer Park in October. Not even the winter cold could convince him to go back to an SRO or a temporary shelter.

“I can’t live in a place like that, getting bitten at night. I had to go sleep somewhere else,” he said.

After moving to the park, he applied for permanent housing. He's currently waiting for a response. 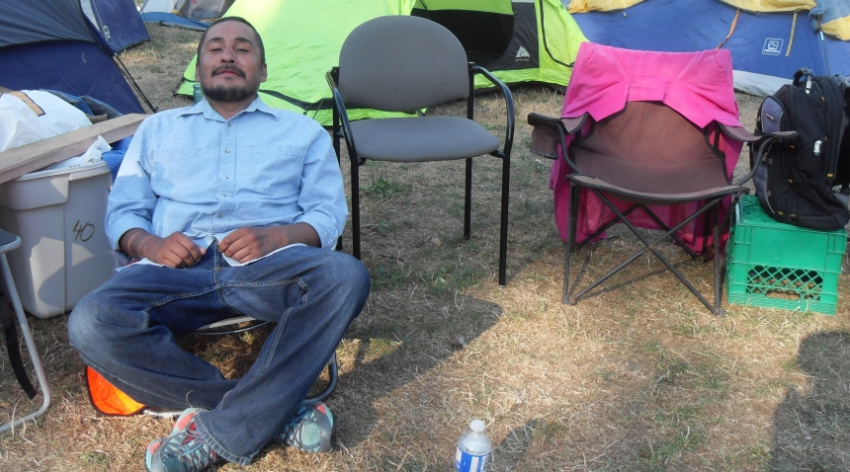 Lawrence Houle prefers to live in the park than in an SRO. Photo: Valentina Ruiz Leotaud. 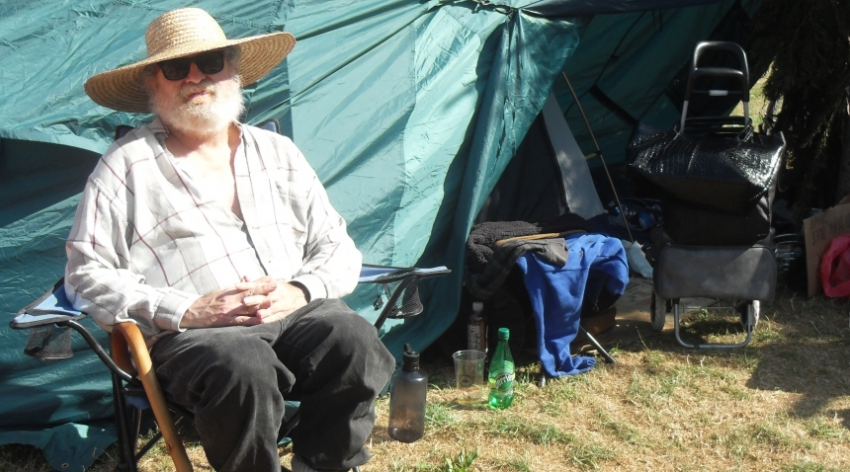 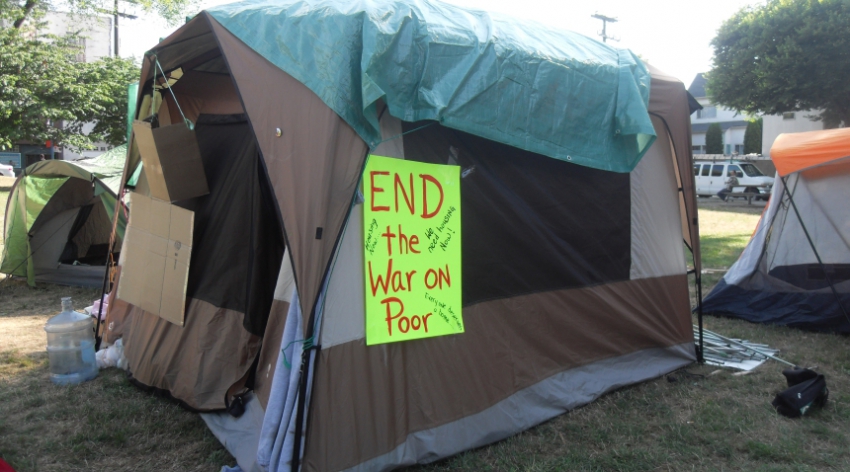 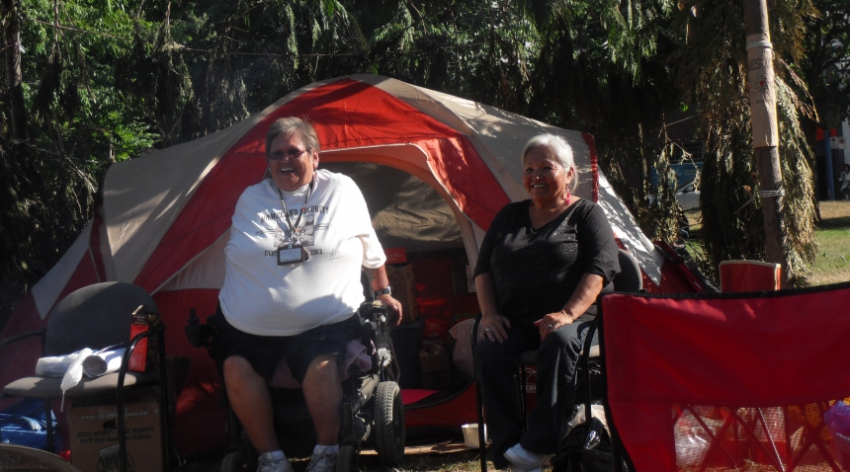