New science shows that Pacific Northwest LNG and Prince Rupert LNG are smack dab in the most sensitive spot for millions of Skeena salmon, treasured by fisheries, anglers, First Nations and sushi lovers. 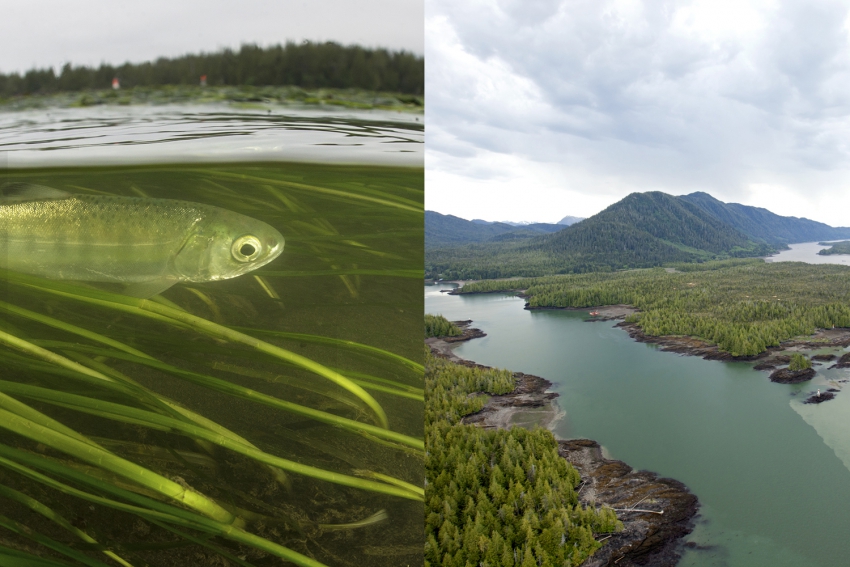 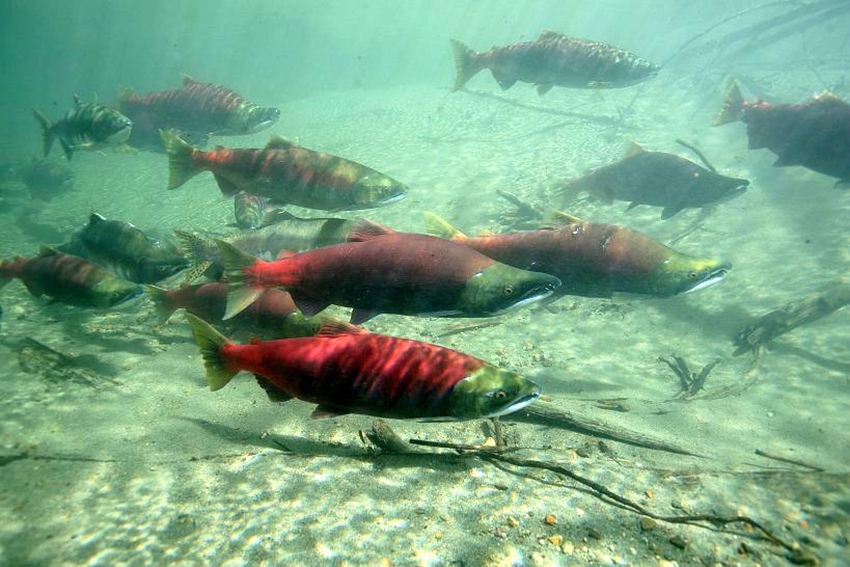 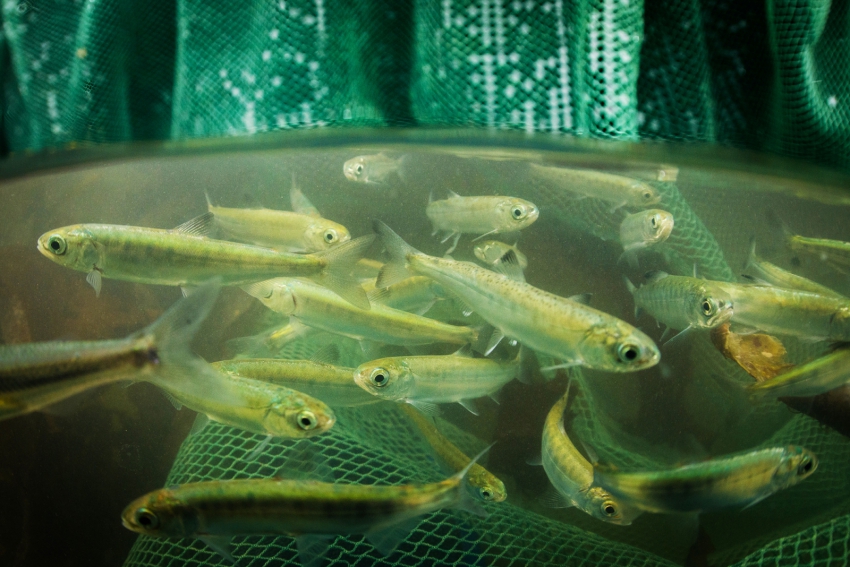 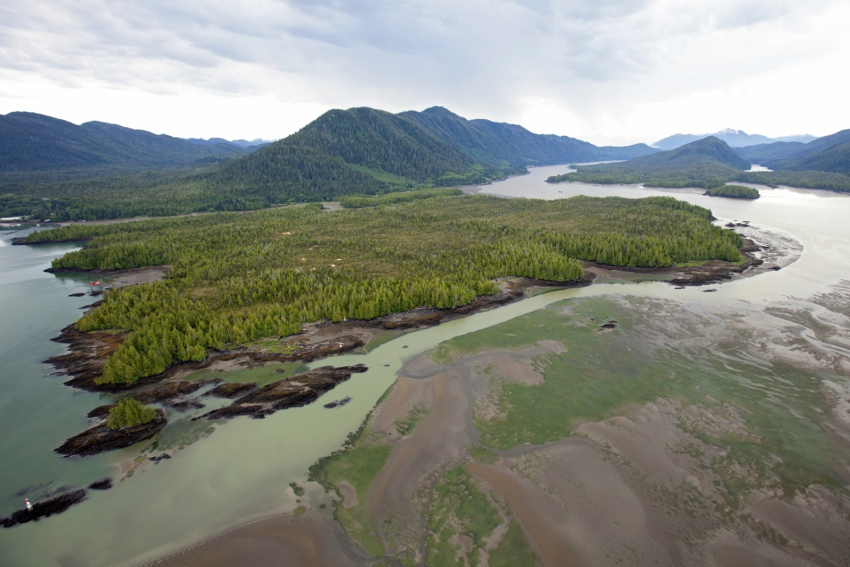 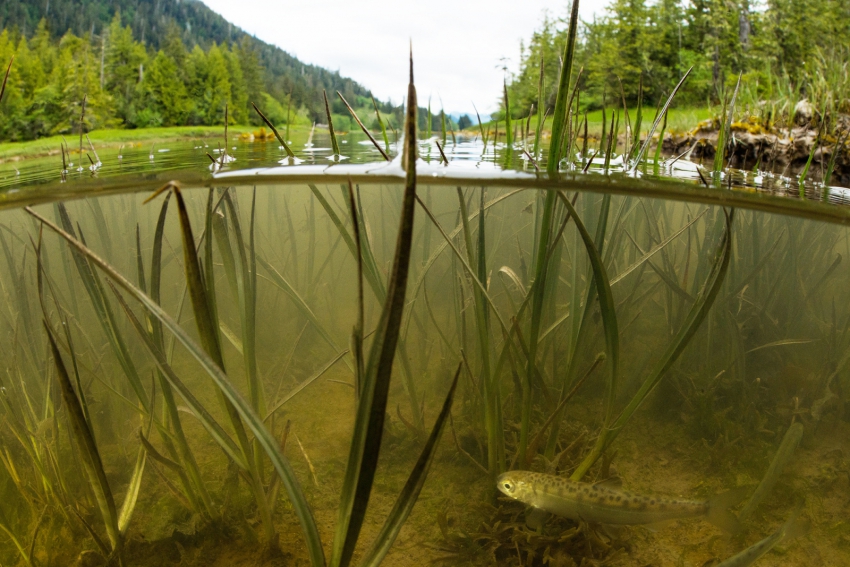 Juvenile salmon among protective eelgrasses of Flora Bank; and an aerial view of Lelu and Ridley Islands near Prince Rupert where two LNG terminals are planned - photos by Tavish Campbell and Brian Huntington respectively

The gas terminals couldn't be in a worse spot, say scientists.

Two multi-billion-dollar LNG marine export facilities slated for the province’s northwest are under fire for being smack dab in the most critically important waters for rearing millions of wild B.C. salmon, a new Simon Fraser University scientific study reveals.

“The worst case scenario is the [Skeena] salmon population would collapse, and to levels that would not allow commercial fishing,” said Assistant Professor Jonathan Moore with SFU’s School of Resource and Environmental Management.

Next to it, a British-company -- BG Group -- wants to build the $16-billion “Prince Rupert LNG” project on Ridley Island.

“This area, right where this [LNG] development is proposed, has the highest abundance of some of the most important salmon species within the Skeena watershed," said Moore, an aquatic ecologist.

The SFU researchers netted salmon in 2007 and 2013 in the five possible zones where juvenile salmon swim northward and southward from the Skeena River’s exit onto the Pacific (see graphic). 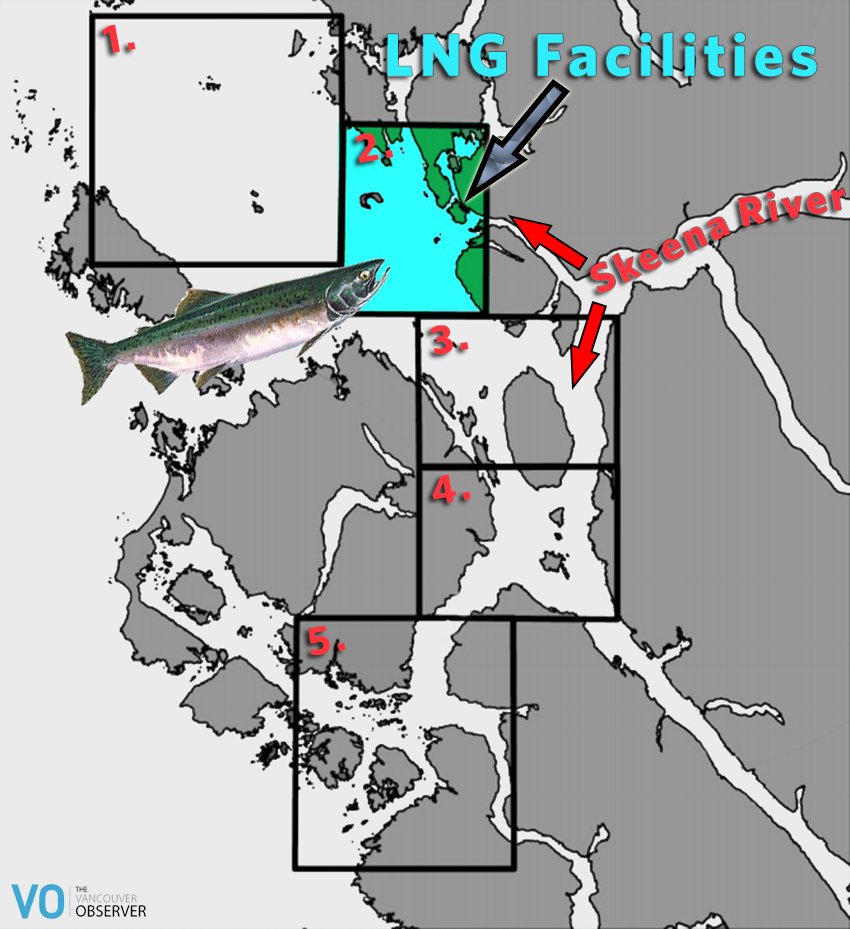 The area with the highest number of commercially important salmon (Zone #2 in blue-green) is where the two proposed LNG facilities are planned to go.  It contained:

The study, available online, is under peer review, and was a collaboration between Simon Fraser University, Lax Kw'alaams First Nation, and the Skeena Fisheries Commission.

If granted environmental licences, both LNG projects would dredge hundreds of thousands of cubic metres of underwater sediment to construct berths, for 500 LNG carrier tankers to port each year.

Moore and his research team fear the construction and operation of these natural-gas-export facilities would destroy the salmon's protective grasses and rocky outcrops.

Dozens of B.C. communities, fisheries and First Nations depend on the salmon run for food, tourism dollars, and exports.  The salmon is popularly sold in Vancouver sushi restaurants and supermarkets. 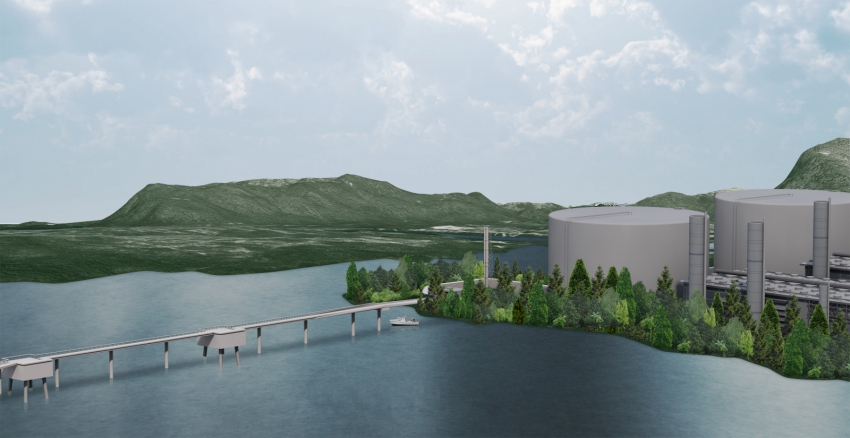 "Pacific NorthWest LNG is committed to the long-term health of the marine environment in the area of our proposed facility. We intend on operating in the area - within the Prince Rupert Port Authority - for decades. Therefore, responsible construction and operation of our project is integral to our success," wrote the company's senior advisor, Spencer Sproule.

"As we stated in our [Environmental Impact Statement], potential effects to fish and fish habitat will be short term, localized and closely monitored to meet environmental standards. Additionally, our project is committed to a suite of mitigation measures and habitat offsetting that will be accompanied with long-term monitoring programs..." he added.