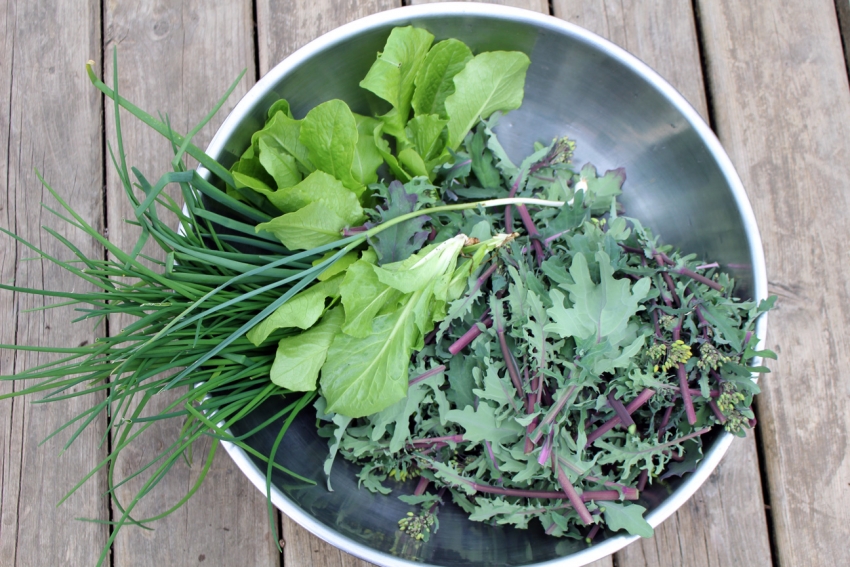 As recently as World War II, growing some of our own food was an act of subsistence. War efforts in Canada and elsewhere encouraged people to grow vegetables as a way to supplement food sources during times of rationing, and the resulting

Victory Gardens were a source of nutrition that would not have been available otherwise. At this time, vegetable gardens were likely not seen as a trendy lifestyle choice, but as a way of contributing to communities in times of need. Post-war, tidy green lawns generally became the ideal; convenience foods and things in cans were the epitome of good eating.

Fast forward to 2016. Around the world, people have woken up to the fact that we’re far removed from the sources of our food. Many of us have now heard that the the average meal travels 1,200 kilometers to get to our plate, that pesticides, preservatives, and unhealthy forms of sugar and fat pervade processed foods, that many agricultural practices, especially those involving animals, contribute more than their shares of greenhouse gasses. The solution? Get back to our roots, eat local and minimally processed foods, reclaim pride in a relic of years past: the home vegetable garden.

But there’s a problem with this scenario. Simple food grown close to home can be surprisingly expensive.

I recently participated in a panel discussion at the Vancouver Food Symposium entitled “Is Local Food More Just?” One of the questions that came up was: “Is local food only for privileged people?” My answer was, more or less, yes. Especially when it comes to growing our own food. Especially when we’re trying to grow it in Vancouver.

Vancouver aims to be the greenest city in the world by 2020. Vancouverites pride ourselves on our healthy lifestyles. It’s a city of lush green spaces with the highest rate of bike commuting in Canada, the place where the 100-Mile Diet was born.

It’s also a city with – as we all know – some of the highest real estate prices in the world.

In theory, growing food should save us money. Although there are costs associated with setting up a new garden, once good soil and a compost system is in place, gardens can stay fertile for years without a lot of new inputs.

Two zucchini seeds can create pounds of zucchini. A single $3 packet of kale seeds will provide more greens than you can eat for several growing seasons; meanwhile, a single bunch of imported organic kale can cost up to $4 at the grocery store given dollar fluctuations and climate change.

Vegetable gardens take up surprisingly little space: a couple of raised beds can keep you in salads from May to October in Vancouver, a prospect that makes even more sense given that fresh vegetables are carbon-intensive to transport and lose their nutrients quickly.

That's the theory. Reality is quite different. When you consider the challenges of actually finding space in this city, growing food can be quite a daunting prospect. This is a city of apartment-dwellers and renters, of basement suites and renovictions.

While Vancouver boasts a large number of community gardens, most have waitlists. And while farmer’s markets and Community-Supported Agriculture offer powerful ways to connect with the sources of our food, they may not be an option for everyone.

Beyond physical space, growing food and cooking it requires significant time and personal energy. All of this can add up to serious barriers for many people who wish to eat more healthily – whether it’s growing their own food, or just getting a chance to cook something fresh.

Gardening and urban farms will likely never provide more than a small portion of the calories we consume. Agricultural land will likely always be the backbone of our food system.

Yet there is tangible value in the nutrition, education, smart land use and community-building that can happen when people put their hands in the soil. I am fortunate to have access to a family garden where our food is grown, even though it’s across town from where I live. It’s a situation that I try not to take for granted.

What we're doing now to prepare for watering restrictions

What we're planting this May