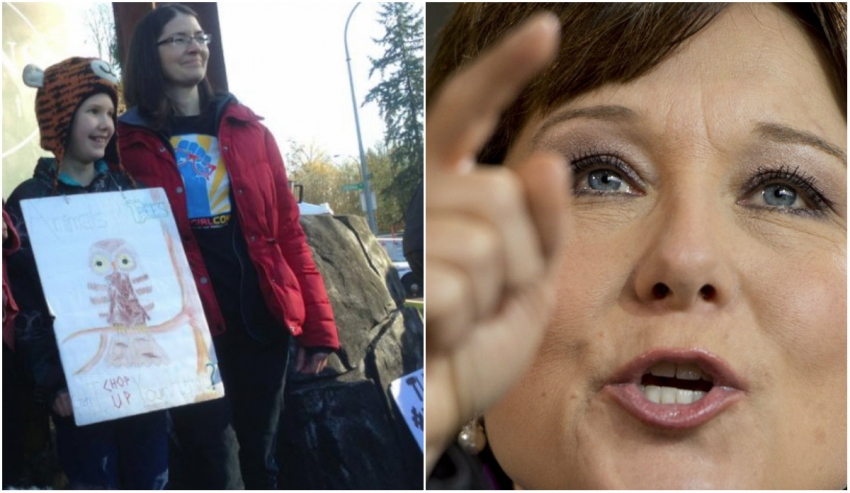 “They’re 11 years old, for heaven’s sakes,” Clark said in an interview with The Province, referring to two grade six students who crossed the line with their parents. “Teaching your kids that it’s OK for them to break the law when they’re 11 years old isn’t OK. I think we all as parents would ask ourselves, ‘What kind of message are we sending to our kids?’”

Clark's comments come after the B.C. Civil Liberties Association found that protesters never set foot inside the injunction zone due to an error in GPS coordinates by Kinder Morgan, and did not break any law. Last week, the Supreme Court dismissed all civil contempt charges for protesters and rejected Kinder Morgan's bid to extend the injunction. The two students, Kate Fink-Jensen and her friend Naomi Cech, were immediately released and not charged.

The girls' parents said Premier Clark shouldn't be judging other people's families and their decisions to protest Kinder Morgan's pipeline, which would bring 890,000 barrels of diluted bitumen per day from Alberta through Burnaby.

“She doesn’t know my family or my daughter,” Naomi's father, Peter Cech, told The Province.  “Our daughter stands up for her beliefs. It feels very unfair to hear criticism like this from someone who knows nothing about us.”

Kim Fink-Jensen also said her daughter felt strongly about the pipeline because of its potential impact on Burnaby, and asked to cross the police line. She said she told her daughter she would support her and accompany her to ensure her safety.

Clark, meanwhile, has herself admitted she is "not a perfect parent" herself, and was criticized for driving through a red light after a dare by her son, who was 11 at the time.