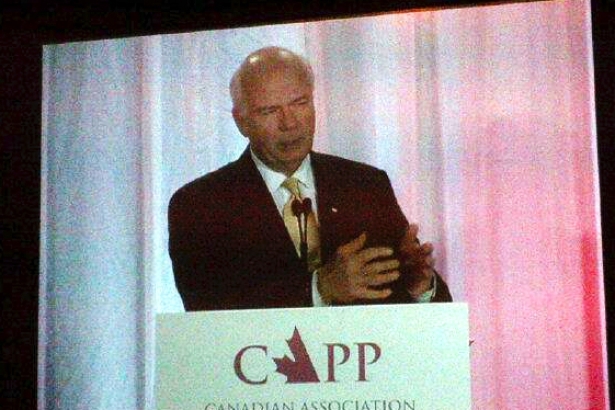 It's not just Rex Murphy: CBC's The National' anchor Peter Mansbridge gave a keynote address at a Canadian Association of Petroleum Producers (CAPP) Investors Symposium. The photo, dated December 10, 2012, is still on the CAPP Facebook page, saying that Mansbridge "articulated that energy has moved to the forefront of news: economic, environment, safety."

The photo was featured by conservative BC Blue blog author Dean Skoreyko, who questioned why Rex Murphy was being criticized for speaking at oil sands engagements when other journalists have done the same.

CBC News’ General Manager and Editor in Chief told the Vancouver Observer last week that new rules about forcing “freelance” commentators, like Rex Murphy, to reveal their speaking fees are being discussed.

“While in principle we support transparency, we are trying to understand the complications of demanding this obligation of our freelancers.  We will have more to say about this soon,” said Jennifer McGuire in an e-mail.

Official complaints to CBC's Ombudsman have also being filed, regarding the issue of disclosure oil sands' speaking fees.

Other prominent journalists who have acted as speakers at oil industry events include Doug Kelly, publisher of the National Post, and Ezra Levant, commentator on Sun News Network. Some have suggested that David Suzuki, who speaks frequently on environmental issues, should also have to disclose when he is paid to speak at events. 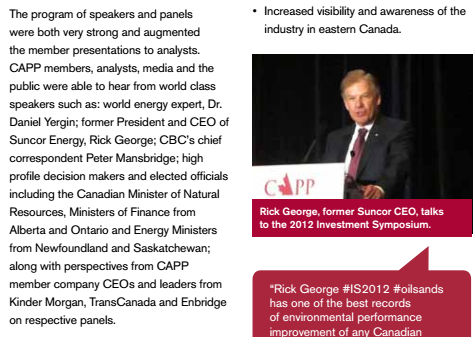 Screenshot of 2012 Investment Symposium PDF in which speakers including Peter Mansbridge were mentioned.