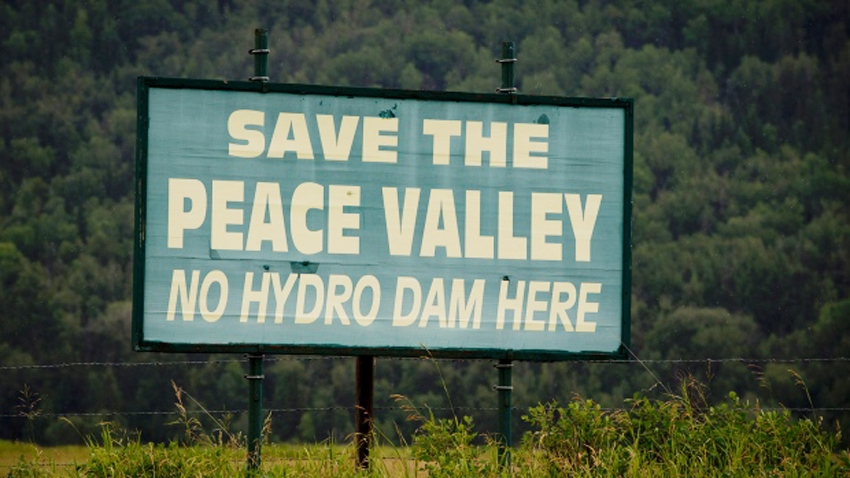 Despite signs protesting construction, the province has announced construction will begin soon on a road designed to provide better access to Site C. Canadian Press photo

Legal opposition to the Site C hydroelectric dam in northern British Columbia is ramping up just as BC Hydro and the province are announcing their first collaborative contract related to the megaproject.

Farmers and ranchers in the Peace River area are appealing a decision by B.C. Supreme Court last month to reject a bid to quash the proposed dam, which they say would flood large portions of prime agricultural land.

The Peace Valley Landowner Association argued that the province failed in its legal duty to consider recommendations that followed an independent environmental review.

"That (court) decision gave free rein to governments to make any decision without considering the recommendations of the Joint Review Panel," said Ken Boon on Thursday. "That's a dangerous situation."

The court ruled that the minister had the discretionary power to issue environmental approval even without considering recommendations made by the Joint Review Panel in a report last spring.

The panel's 471-page document said the dam would have a significant negative impact on the environment and wildlife, as well as aboriginals, farmers and other users of the Peace River valley.

Still, it found that the project's benefits are clear and the alternatives to developing the necessary energy few.

The province dismissed concerns over Site C's negative impact, saying the project has undergone one of the most comprehensive reviews for a public infrastructure project in B.C.'s history.

As for Site C, Willson said First Nations in the area were not opposed to the creation of energy, but took issue with the destruction of the valley.

"Site C is renewable but it's not green," he said. "There's nothing green about destroying a valley."

Thursday was the final day Treaty 8 First Nations were scheduled to argue in B.C. Supreme Court against the province's decision to issue environmental approval for the megaproject.

The province has announced construction will begin soon on a road designed to provide better access to Site C.

Provincial Transportation Minister Todd Stone said the nearly $8-million contract, announced in partnership with BC Hydro, is critical to moving people and construction materials to the site.