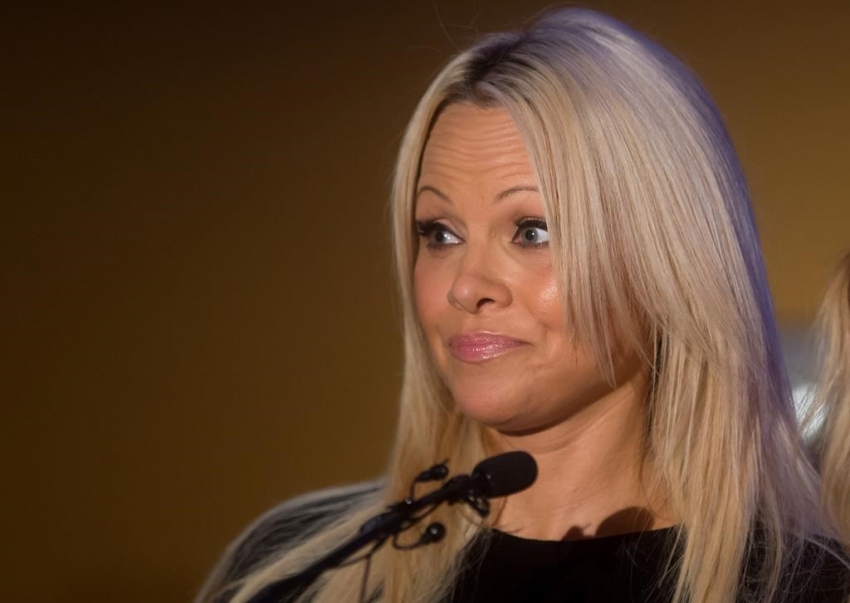 But she quickly switched to a serious tone and said citizens should keep climate change top of mind when they go to the polls on Oct. 19, calling it "the most important issue to anybody in the whole world."

"Harper doesn't have a good track record with that (issue)," she said on Friday to explain her opinion.

"I think it's our decade's most important issue to deal with and putting the environment ahead of the economy, I know, is a difficult choice."

When asked on the campaign trail earlier this month why he hasn't addressed climate change, Harper said he believes the two major issues are the economy and security.

The Conservative's policy sets a target of reducing carbon emissions by 30 per cent from 2005 levels by 2030, which Harper has said goes farther than any government in Canadian history.

The former "Baywatch" star and model from Ladysmith, B.C., was in Vancouver to release her new book of poetry and photographs called "Raw."

The 48-year-old, who calls herself a "small-town Canadian girl," used the appearance to weigh in on the election, the environment, marijuana legalization and British Columbia's wolf cull.

Anderson can't actually vote in Canada because she has lived abroad for more than five years. The rule dates back to the 1993 Canada Elections Act. Anderson is a dual citizen of Canada and the United States.

The actress, who's known for her activism, told a news conference that she calls upon her "really smart friends" to determine her positions on the issues she promotes.

"I have 20 people, if I'm writing a letter or I'm doing anything I get their input," she said.

She said the proliferation of medical marijuana dispensaries in Vancouver illustrates that Canada may be "coming around" to her view that pot should be legalized.

"I think it would be great for B.C.," she said, noting its importance for medical users.

But Anderson said she doesn't smoke marijuana herself because she doesn't think being hungry, paranoid or tired is fun.

She also reiterated her opposition to B.C.'s wolf cull after writing an open letter to Premier Christy Clark earlier this week. The letter called for a better solution to saving endangered caribou than the slaughter of wolves.

"It's a very cowardly way to hunt, especially from helicopters," she said. "I believe nothing good has ever come from a gun."

She drew laughs again when she lauded American singer Miley Cyrus, who has also criticized the wolf cull.

"I'm excited that Miley is interested in other things than herself," Anderson said.

"Someone in her position doesn't necessarily have to care about the environment. And the fact that she's passionate about something else is such a great role model to kids."

'Worst' of climate predictions are the most likely: new study