Kinder Morgan’s Proposed Expansion of the Trans Mountain Pipeline: Not Worth The Risk 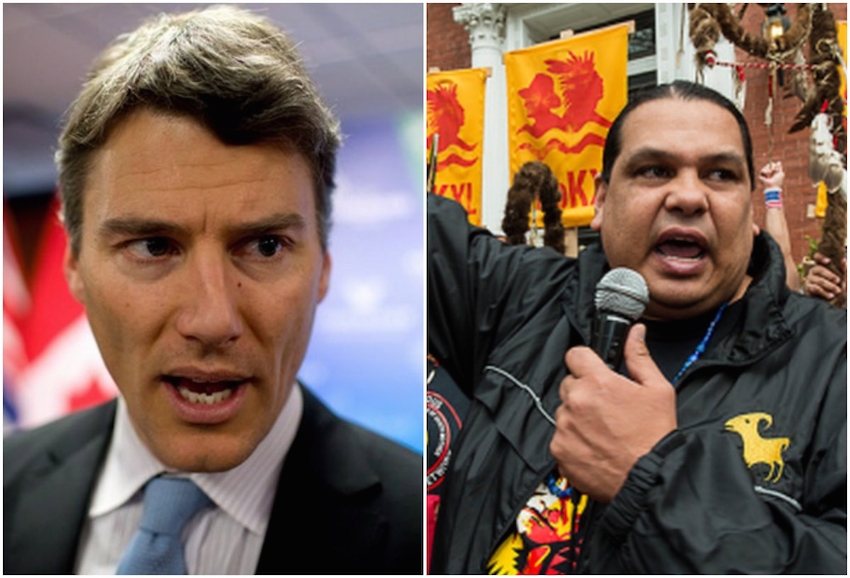 Vancouver Mayor Gregor Robertson and Tsleil-Waututh spokesperson Rueben George have been some of the most vocal opponents of the Kinder Morgan Trans Mountain expansion pipeline proposal. Photos by Canadian Press and Garth Lenz/iLCP.

In late May, 2016, the National Energy Board (NEB) recommended that the Governor In Council approve Kinder Morgan’s proposal to expand its Trans Mountain Pipeline (TMP).

As Mayor of the City of Vancouver and the Musqueam, Squamish and Tsleil-Waututh (MST) First Nations on whose territories the proposed pipeline and tankers will cross, we strongly oppose the approval of the TMP Expansion Project. Our opposition is rooted in evidence, scientific data and traditional knowledge. Specifically, the City and affected MST:

1. Have significant concerns about the merits of the pipeline expansion proposal and have concluded that it is not worth the net risk for Vancouver residents and the Canadian public from either an environmental or economic perspective; and

2. Have concerns that the National Energy Board’s (NEB) regulatory process is flawed and biased and has lost public confidence, failing to properly consult affected communities along the pipeline route.

The MST are resolute in our opposition to Kinder Morgan’s expansion proposal as it puts our territories at further risk of irreversible environmental damage, contrary to our long held stewardship obligations and responsibilities. Our interests have in no way been addressed through the NEB process. As one example, an expanded pipeline and associated tanker traffic puts the Tsleil-Waututh Nation’s Burrard Inlet Action Plan for environmental stewardship in jeopardy as it adds to the accumulation of adverse effects on both our traditional subsistence and contemporary economies as well as the title, rights and interests of the MST.

Our economic growth is driven by our fastest growing sectors: technology; digital, entertainment and inter-active, and green economy. These jobs are the foundations of a 21st century economy: diverse, knowledge-based, highly skilled and low carbon. Vancouver also leads the country in green economy jobs, which are growing by six per cent each year — five times the growth rate across all sectors in British Columbia.

An expanded Trans Mountain pipeline would see a seven-fold increase in tanker traffic, increasing the number of oil tankers in our local waterways from five to 34 per month. With an oil spill, more than 10 kilometres of the Vancouver shoreline could be oiled, impacting Stanley Park, much of the seawall, beaches, marinas and other waterfront areas. Our green, clean, sustainable brand, valued at $31 billion, could suffer up to $3 billion in damage, on top of risking hundreds of thousands of jobs dependent on our ocean-based and green economy.

NEB: A Flawed and Biased Process

Most significantly, the NEB ruled that there was to be no oral cross examination of Kinder Morgan’s application – the first decision of this kind in over 20 years. As a result of the NEB’s approach to evaluating the Kinder Morgan pipeline and failure to properly and thoroughly consult affected residents and communities, many voices were shut out of the process.

The federal government’s Ministerial Panel is an opportunity to rectify the flawed NEB process to further engage with those on the pipeline route and consider additional evidence not contained in the written submissions to the NEB.

Since Kinder Morgan submitted its TMP proposal, global values towards fossil fuels have shifted. In December 2015, Canada joined nearly 200 countries in committing to the most ambitious climate action agreement in history – the COP21 Paris Climate Conference Agreement – which hastens the transition away from fossil fuels towards clean energy by 2030. In addition, the federal government of Canada signed the Vancouver Declaration alongside the provinces to capitalize on the opportunity of a low carbon and climate resilient economy.

The City is encouraged by the federal government’s commitment to reduce GHG emissions and applauds the addition of climate methodology to assess oil and gas pipelines against this commitment. Currently, Environment and Climate Change Canada is only planning to consider ‘upstream’ GHGs in their climate assessment of oil and gas pipelines – excluding downstream GHGs (which are ten times higher than upstream ones) in assessing the Trans Mountain pipeline expansion. This approach fails to consider the major ramifications for climate change on top of the significant risk of an oil spill, and doesn’t reveal the pipeline’s true and significant environmental costs. We urge Environment and Climate Change Canada to consider downstream GHG emissions in its assessment of Kinder Morgan’s pipeline expansion in addition to the upstream emissions already being evaluated.

Thank you for your consideration of our position. The City of Vancouver and affected MST are confident that the Ministerial Panel will see that, on balance, there is no benefit to this pipeline for local communities or Canada as a whole.