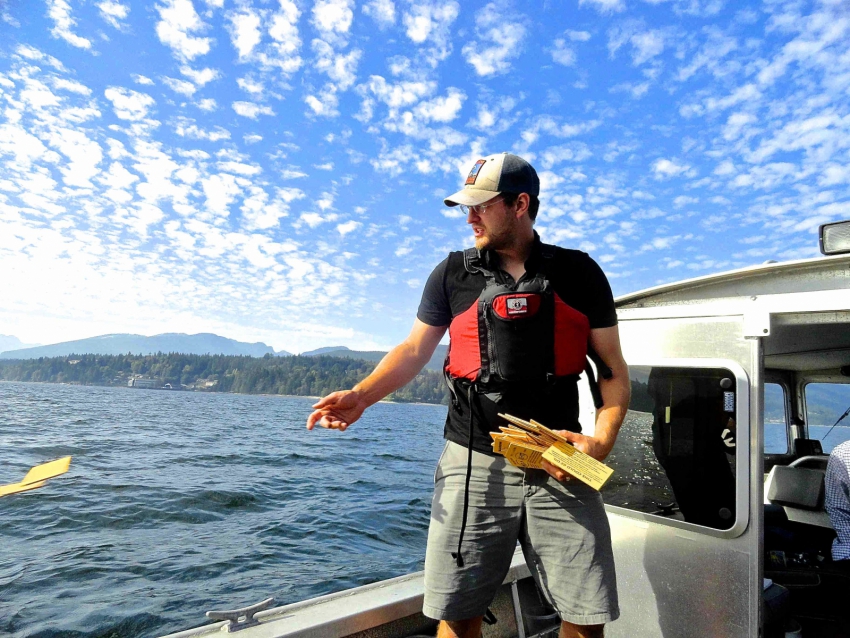 Andy Rosenberger of the Raincoast Conservation Foundation throws drift cards into the ocean.

Vancouver-based artist Tamara Phillips was out swimming with her partner near Stanley Park sea on a hot, sunny Wednesday, when her eye caught a glimpse of a yellow card, floating along the water's surface.

The card was stamped with the text "This could be oil", drawing attention to the potential consequence of an oil spill on the coast. Hundreds of cards were dropped along the Fraser River and Burrard Inlet area on Tuesday by members of the Raincoast Conservation Foundation to simulate how oil would disperse in the event of a spill. 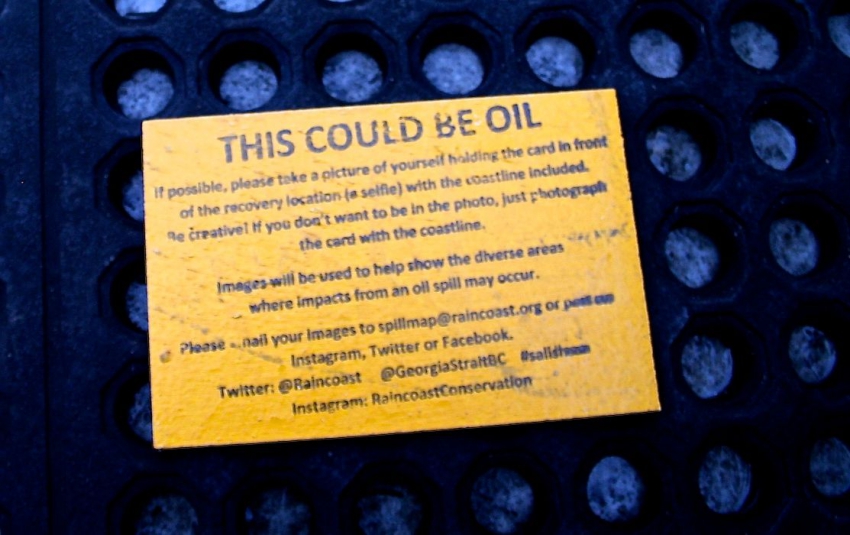 The experiment is timely ahead of NEB hearings for the Kinder Morgan Trans Mountain pipeline expansion, which would increase the number of tankers to Burnaby five-fold to over 400 oil tankers a year. 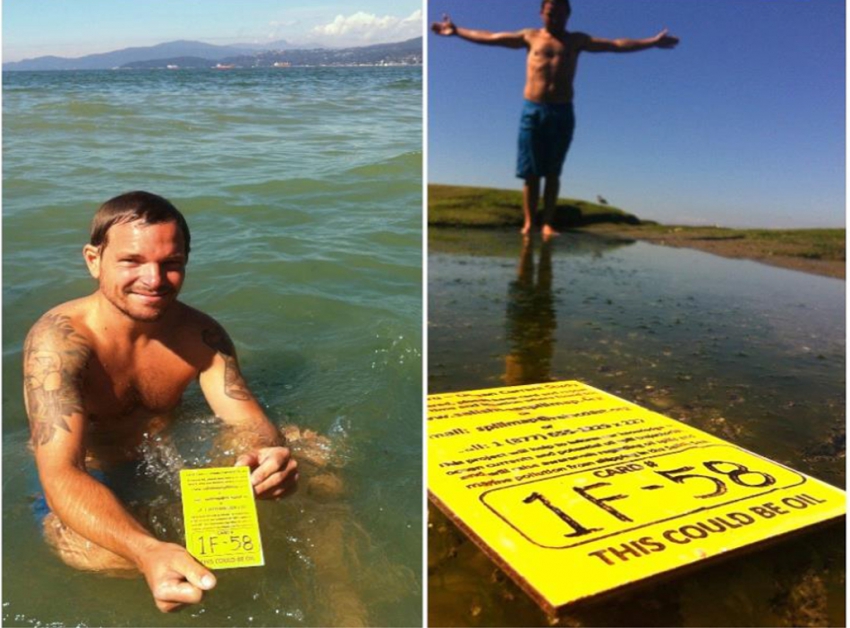 "My partner and I went for an early afternoon swim at Third Beach and found the card in the water, coming in with the tide," Phillips told The Vancouver Observer.
She said while it was "exciting" to find the card, it made her reflect on the hard reality of oil spills in Vancouver, as well as other hazardous waste or chemicals that could "harm our wildlife, our friends, our family, and our children."
"Finding the card made a statement. It stares you in the face and forces you to think: This could be oil," she said. "It isn't a rant on Facebook...it's an actual physical thing that crossed my path while I was out experiencing the sea. The card demands your attention." 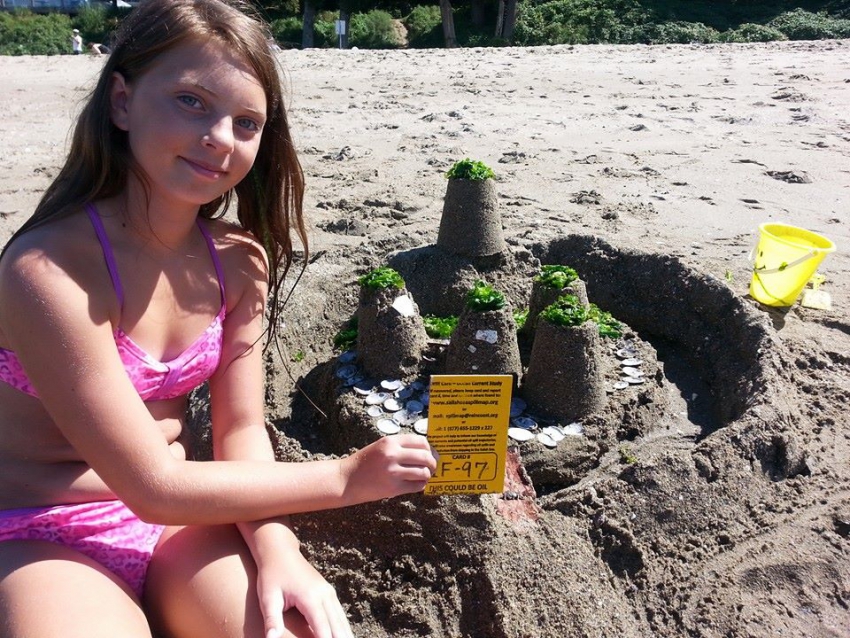 Phillips said she visits the shoreline "almost every day" she is in the city, and said she couldn't imagine what an oil spill would do to the otters, birds, fish, and plants along the coast.

"When people pick the cards up, it really hits home -- that this could be oil, and this is where their home is," Raincoast Conservation Foundation policy and program manager Ross Dixon said. 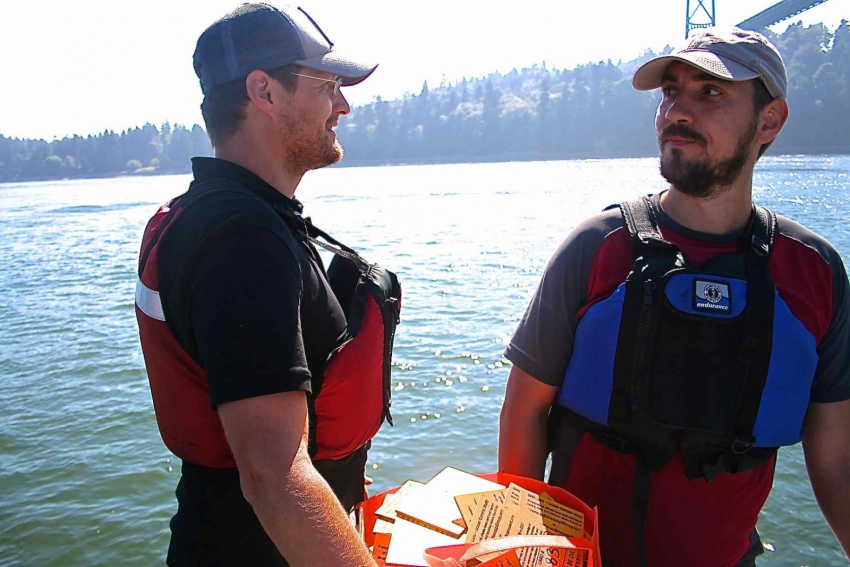 "There was one woman from Haida Gwaii who picked up a card from one of our previous drops, and she said she hadn't even given much thought about the [Kinder Morgan Trans Mountain] pipeline before." Seeing the card wash up on her shore, however, made her realize that the expansion affect her too, even though Burrard Inlet is situated far away from her home.

People who find the cards are encouraged to contact Raincoast, so that the group can place the drift cards on the Salish Sea Spill Map.