Spill posed no significant human health risk but nearby residents were advised to reduce fume intake by closing windows and turning off air conditioners. 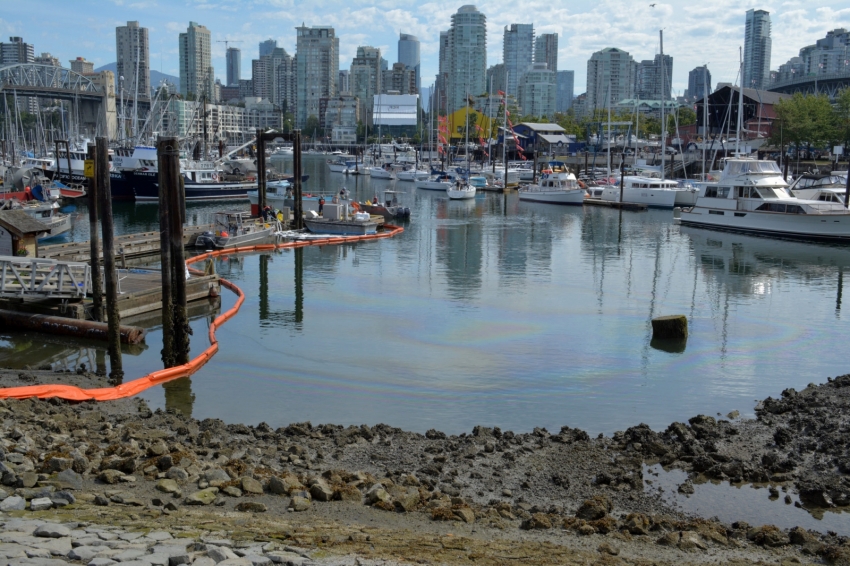 Up to 5,000 litres of diesel have spilled into Vancouver's False Creek, apparently from a fishing boat.

Deputy city manager Sadhu Johnston said there is no significant human health risk from the spill, adding residents who smell fuel should close their windows and turn off air conditioners.

The Canadian Coast Guard alerted the city to the spill around 2:30 a.m. Monday, several hours after the spill happened, according to reports. Sadhu said crews were working it have it cleaned up by the end of the day.

The strong smell of the fuel had people walking away from the area, according to Kitsilano resident Jeremy Board who shot photos of the spill several hours later.

About 300 metres of containment boom were set up near Granville Island, and crews were skimming the water and using absorbent pads to clean up the fuel, said Jeff Brady, a spokesperson for the coast guard.

But Board reported that the boom (interestingly, secured to the Greenpeace plaque at the False Creek wharf) appeared ineffective while he was in the area until it was moved east.

Based on the smell and appearance, crews believe the fuel is diesel, and crews are trying to determine where it came from, Brady said.

Most of it has already been cleaned up or has evaporated, and crews have been going up and down False Creek to ensure there isn't any fuel in other areas, he said.

Johnston said communication between the city and the coast guard has improved since a spill earlier this year, when a container ship leaked more than 2,500 litres of oil into English Bay.

"We're still working on our notification protocol, but it's gotten a lot better," Johnston said. "Clearly, the coast guard has recognized the importance of collaborating and communicating with the municipality. So we really appreciate that. And now we want to refine that."

— with files from Jeremy Board