Oil spill in Burrard Inlet could cost Vancouver up to $1.2 billion: UBC report 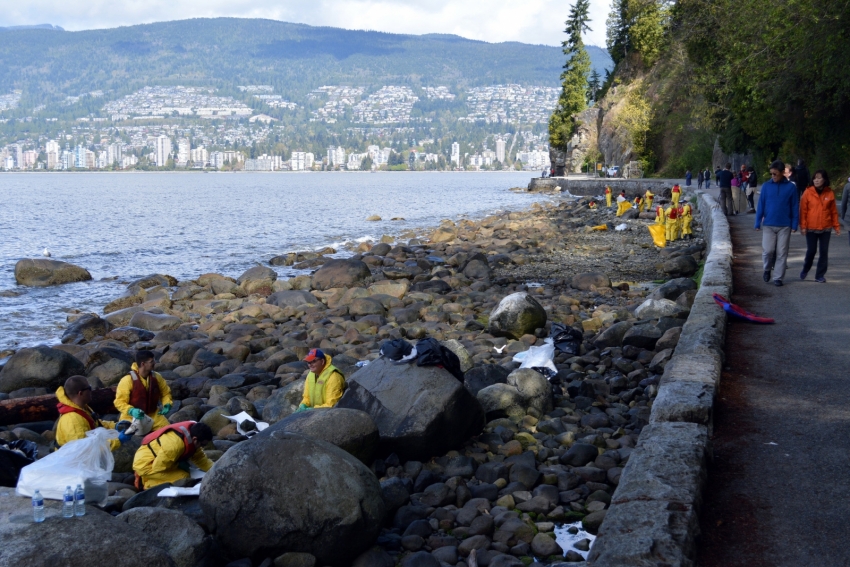 A major oil spill in the Burrard Inlet could cost the city up to $1.2 billion in lost economic opportunities, according to a new UBC report.

The UBC Fisheries Economics Research Unit produced the report for the City of Vancouver, which is an intervenor in the federal review of Kinder Morgan's Trans Mountain pipeline expansion. Kinder Morgan is applying to expand the capacity of the Trans Mountain pipeline to 890,000 barrels of diluted bitumen a day, which would increase the number of oil tankers through Burrard Inlet five-fold if approved.

According to the report, use of the seawall produces $145-$170 million of value annually to the local economy. Vancouver's beaches attract over three million people annually, its waterfront parks attract over five million and the seawall attracts over 2.7 million.

In the event of a 16 million litre oil spill at First or Second Narrows during the month of May, local revenue loss could be in the range of:

Economic losses would be significantly lower in the event of an oil spill past peak tourist season, the report states. The actual loss could be higher, according to the City of Vancouver, since the report doesn't take into account the costs of real estate value, clean up and recovery.

This report forms an integral part of the written evidence that the City of Vancouver will be submitting to the National Energy Board on May 27, 2015.