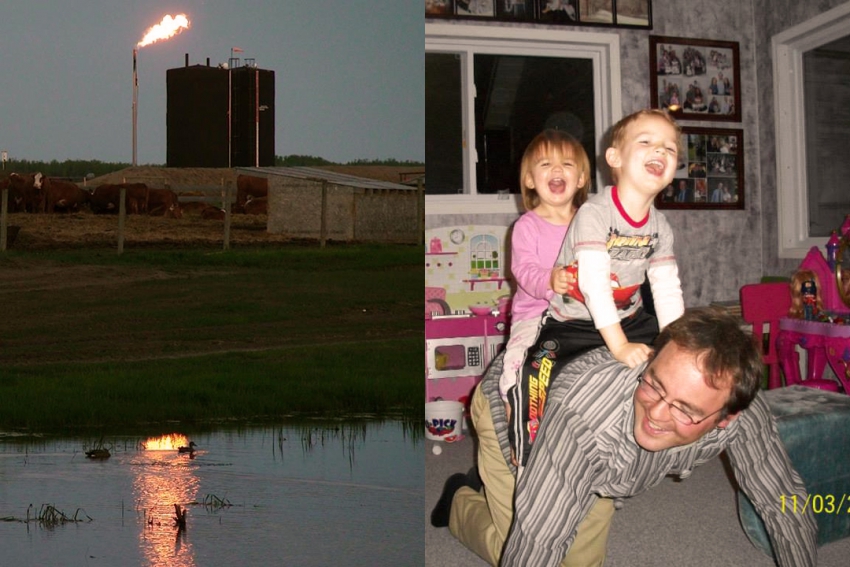 Photos submitted by A. Labrecque

Northwest Alberta grain farmer Alain Labrecque recalls the first winter in 2011 when the fumes from oil tanks near his home in the Peace River area seemed to trigger terrible health effects for himself, his wife and two small children.

"I started getting massive headaches.  My eyes twitched.  I got dizzy spells.  I often felt like I was going to pass out."

“Next thing I knew, my [3-year-old] girl had trouble walking.  She had no balance.  She would sit at the table, and she would just fall off her chair."

"My [4-year-old] son - he was really black under his eyes all the time, and had big time constipation.”

“Then my wife fell down the stairs while carrying a laundry basket."

“We went through a weird winter like that," Labrecque told the Vancouver Observer by phone Sunday.

Labrecque, his family, and neighbours are part of a group of rural home owners now giving testimony to an unprecedented Alberta hearing, examining the health effects of the odour and emissions from bitumen extraction.  About 75 people packed the conference centre, each day of the first week of proceedings.

Homes abandoned due to oil fumes

At least six families have abandoned their homes, citing health concerns from heavy oil emissions from the Reno field, about 500 km northwest of Edmonton.

On Friday, Alain, his wife Karla, and Alain's uncle gave emotional testimony to the Alberta Energy Regulator (AER) forum on how this field has torn their lives apart. The AER is an industry-funded oversight agency.

A pad of four heavy oil tanks is just 500 metres from Labrecque's home. Another 16 tanks are another 1,000 metres further.

The hearing revealed that Baytex did not initially install vapour recovery systems.

"In 2010, the facility and tank design in use at 4 Baytex sites did not capture emissions from tank tops," Baytex's Alberta and BC business unit VP Rick Ramsay admitted in his testimony.

Kids waking up soaked in chemicals

Labrecque says his small children Alec and Candace would often wake up soaked, trying to "sweat the chemicals" out, resulting in rashes and burns.

Fed up and terrified, he eventually moved his family to Smithers, B.C., even though he was enjoying his best income ever as a farmer in Alberta.

"I grossed a million dollars. But I just couldn’t stay there,” said Labrecque.

He prays his children have not suffered long term, but says many in his family continue to suffer memory loss, reduced sense of smell, and extreme chemical sensitivities.

“We’ve all become so sensitive now.  My uncle can’t even fuel his truck.  Any emissions give him a headache right away."

"[My wife] can’t go into a pool with chlorine.  If she does, it will trigger a huge headache, and won’t be able to function for a day.  Windshield fluid is the same thing.  She can’t use it."

“Then recently, we tried snowmobiling.  She tried it for five minutes, and she was bed-ridden until the next day," said Labrecque.

Expert toxicology testimony given at the hearing suggested sulphur from the tanks may be the main health concern.

An industry expert disputed this, suggesting the problem has to do with the terrible odour alone, and the effects are not as bad as reported by families.

A Baytex-commissioned air study showed that concentrations of the chemicals of concern found down wind from the tanks were below guidelines.

Following complaints, Baytex executives said they took proactive measures to control the emissions, and the company is "committed to operating in a safe, environmentally responsible manner."

The Alberta hearing continues this week until Friday.