Indigenous group has been touring United States and Canada offering direct action training to nations committed to standing with the Sioux. 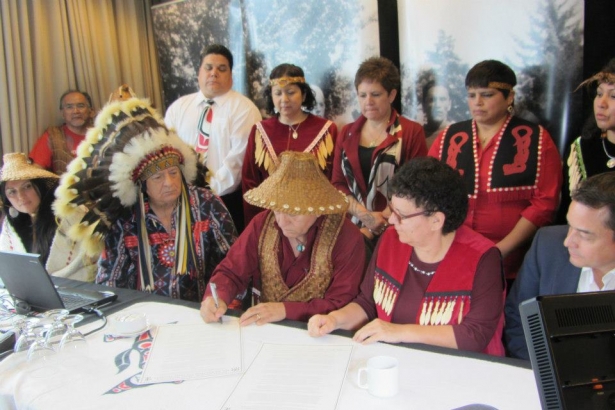 In the latest in a series of announcements escalating resistance to oil and gas development in North America, the Oglala Sioux nation and its allies have committed to stopping the construction of the Keystone XL pipeline on their territory if Obama approves the project.

In response to the US State Department’s environmental report that says Keystone wouldn’t increase the country’s carbon emissions Oglala Sioux president Bryan Brewer, along with organizations Honour the Earth, Owe Aku and Protect the Sacred, released a statement declaring they will stand with the Lakota people to block the pipeline. The statement, seen by many as a significant step toward approval, sparked solidarity action across the US on Monday.

Moccasins on the Ground is a grassroots direct action training organization, and trainer Debra White Plum of the Lakota Sioux nation said the group has been working toward this moment, giving nations the skills they need to defend their land, for years now.

The training is available to anyone who invites the group onto their land, and it consists of four days of training in areas such as knowing your rights, blockading and self-defence, first aid and social media. White Plume said a large part of the impetus for offering the training is the size of the territory at risk. Tribes can be several hundred kilometres away from each other, often making quick help hard to come by.

“This way a community can do whatever they need to do when threatened and they’ll have the skills right here, and that’s really important out here where we live,” she said. “We want this non-violent, direct way that everybody engaging in across the country to be successful,” she said. “But if it’s not and if the final door is closed, then that’s why we’re doing the training.”

The organization has toured the United States and has received requests for training from several nations in Canada. She said the political process has left the people with little choice.

“Every door has been closed through this process. Court decisions have been made that favoured the corporations and there are a few cases here and there where the landowners are still asserting their rights under American law.” But if the government can’t be counted on to uphold its own laws, she said, there’s nothing to stop them violating indigenous treaty rights.

“As red nations people we have seen the federal government violate treaties clear to this day.”

The violation of the treaties—in the case of Keystone it’s primarily the Fort Laramie Treaty between the American government and the Oglala Sioux—is the key reason Phil Lane says it’s unfair to call direct action by indigenous people civil disobedience.

Just as the US and Canada and any other sovereign nation has the right to enter into legally binding treaties, so do First Nations. When a treaty such as the one between the Sioux and the American government is broken by one of the parties bound by it, Lane said a third legal party is required to resolve the situation. Because the governments of the United States and Canada are handling the administration of the treaties they themselves have broken, Lane said it’s impossible to expect justice from them.

What direct action resistance against Keystone looks like will ultimately be up to the Obama administration.

“What's going to happen if he chooses to give in to the oil companies and their allies is he’s going to empower the rising of indigenous people everywhere on Mother Earth,” he said. “This will be another final violation people aren’t ready to take.”

Ottawa-based Idle No More organizer Clayton Thomas-Muller added that it’s crucial to remember that opposition to Keystone XL was initiated and pushed forward by indigenous people. And what’s more, that much of the progress made has been thanks to the indigenous peoples who have demanded recognition of their rights, namely consultation.

In December of 2011 at the annual White House Tribal Leaders Summit, indigenous leaders, including former president of the Rosebud Sioux nation Rodney Bordeaux, presented President Obama with Mother Earth Accord, a document stating indigenous opposition to Keystone XL. The document was endorsed by numerous nations from both sides of the border, NGOs, landowners and the NDP party. Thomas-Muller said it’s the only such document that was delivered into Obama’s hands directly.

“It was only through native rights-based framework being used by indigenous organizations and networks that provide that unparalleled access to the state department and White House,” he said.

He traveled to New York City on Monday night to speak at one of more than 300 actions across 44 states this week. He read a statement written by Debra White Plume and spoke on behalf of Idle No More in Canada.

So many people have been preparing for this moment, he said, and are now coming together for a final push.

“Moving forward, we have a very short timeline. Within the next couple of months we will see a variety of very direct messages like the one we heard from Bryan Brewer of Oglala Sioux nation.”