Anger, mistrust and confusion reign in Gitxsan Nation as alleged "illegitimate" persons are being signed up for agreements about $12-billion-LNG pipeline proposals 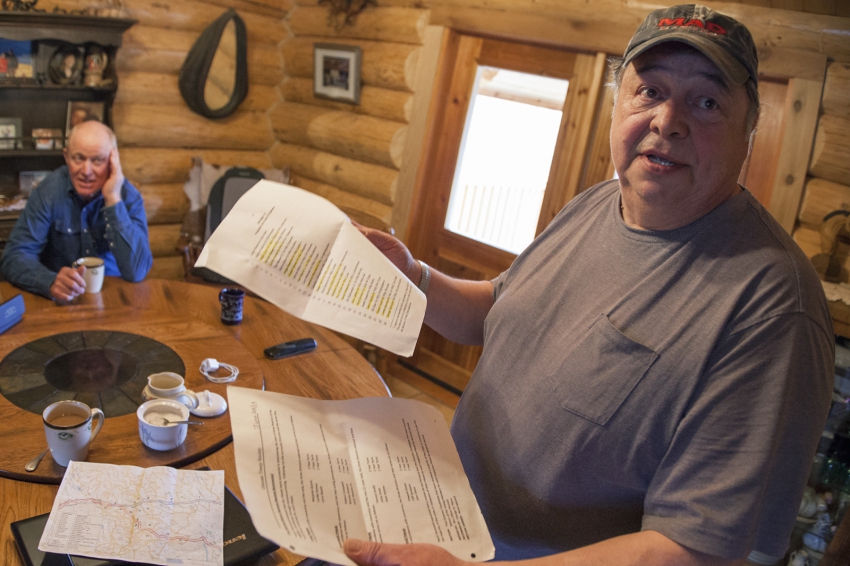 Flying in the face of recent LNG press conferences showing smiling B.C. government officials inking deals with First Nations, is a north Central B.C. tribe, where many of its leaders are livid over what appears to be bizarre attempts to fast-track natural gas development.

Several hereditary chiefs with Gitxsan Nation -- whose territory in pristine wilderness backcountry is crucial to a big chunk of the Premier's $78-billion-dollar LNG plan -- are lodging the unusual and serious allegation that many house chiefs are having their names "stolen."

They claim that that the Gitxsan Development Corporation (GDC), which is trying to facilitate pipeline Gitxsan discussions with government and industry, is encountering house chiefs who oppose LNG.  It's also claimed the corporation then finds other people instead to sign LNG agreements on the house's behalf.  In some cases, these house chiefs weren't initially aware someone else was singing for them.

“The chiefs with the main houses are saying ‘no’ to the gas companies.  So what do they do?  They take the next runner up and say, ‘here’s some money, sign this, and let’s get on with it.’  And that’s illegal material, right there,” said Gilbert Johnson, a hereditary wing chief, on Monday.

Three massive pipelines --- by TransCanada, Spectra Energy and Altagas -- would slice through Gitxsan lands and waterways on their way to export terminals in Prince Rupert and Kitimat. 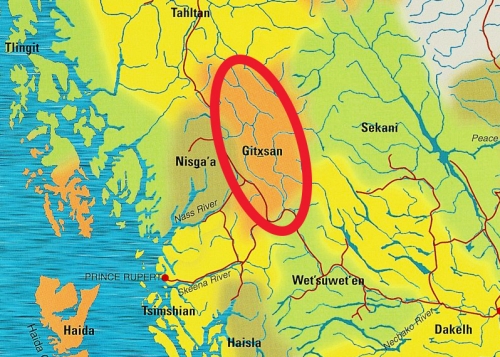 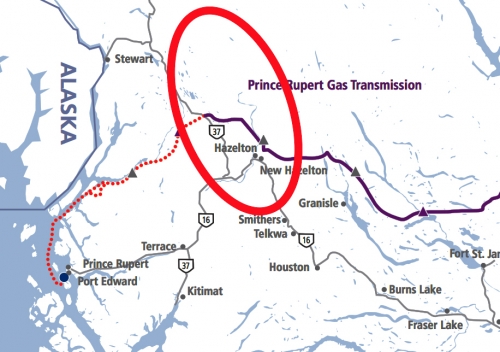 TransCanada's Prince Rupert Gas Transmission is just one of three proposed natural gas pipelines that would have to trespass Gitxsan territory.

For its part, TransCanada said, "We would never conduct any work without the proper regulatory authorizations," wrote spokesperson Davis Sheremata in Calgary.

The pipelines are a key part of Premier Christy Clark's LNG plan.  She was in Asia this week on a hand-shaking tour to speed LNG investment.  B.C. is in a footrace with the U.S. and Australia to export to the energy-hungry region.

Gitxsan Nation is a 30,000-square-kilometre territory represented by a traditional system of more than 65 hereditary chiefs, and five bands.

The largest Gitxsan band is the Kispiox Band Council, headed by elected Chief Councilor Bob Barnes.  Using records he and others obtained, he assembled a map showing some of the legitimate and "illegitimate" house chiefs who have allegedly signed up for LNG agreements.

First photo: map of Gitxsan chiefs who have allegedly signed on to LNG agreements along two pipeline corridors.  Some are not "legitimate" chiefs, allege chiefs Johnson, Barnes, Blackwater and others.  Photo by Mychaylo Prystupa