Newspaper apologizes for involving MP in controversy over ad

"We are responsible for it so we'll take the blame," said Rick Littlechild, the newspaper's general manager, adding that Murray has nothing to apologize for. 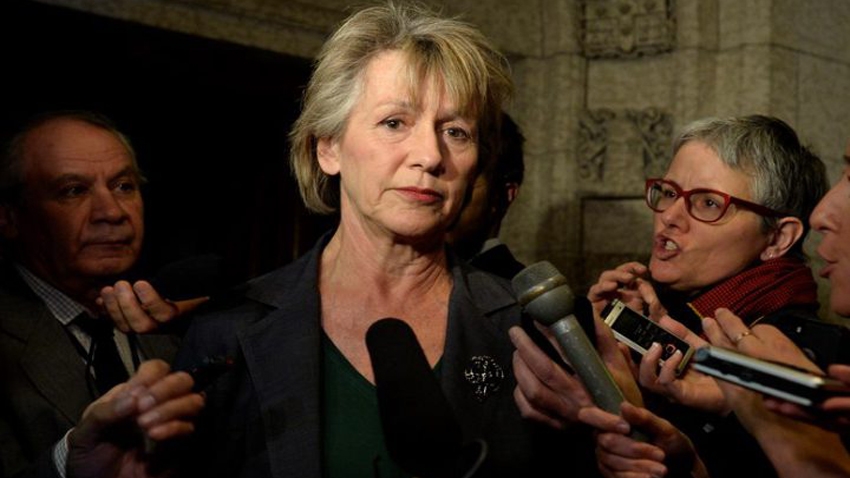 Liberal MP Joyce Murray is apologizing for a newspaper advertisement in which she appears to be feeding racial stereotypes about Indigenous people.

But the newspaper, in turn, is apologizing to Murray for running the ad without noticing it contained offensive content that had been written, without the Vancouver MP's knowledge, by one of its sales people.

The First Nations Drum, which bills itself as the country's largest aboriginal newspaper, ran the ad about three weeks ago.

It features a photograph of a smiling Murray alongside a congratulatory message to all 2015 aboriginal high school graduates.

The message concludes with the slogan: "Sobriety, education and hard work lead to success."

Murray says she was not aware of the ad and did not approve its content; nevertheless she is assuming full responsibility for it and offering her "most sincere apologies."

"I would like to apologize unreservedly for the deeply offensive language in this advertisement," Murray said in a statement posted Wednesday on her Facebook page.

But Rick Littlechild, the newspaper's general manager, said Murray has nothing to apologize for.

"We are responsible for it so we'll take the blame," Littlechild said in an interview.

"She shouldn't take any responsibility. I mean, we came up with the slogan, that wasn't her. She had nothing to do with it."

The paper sells ads based on themes — marking National Aboriginal Day, for instance, or congratulating aboriginal award winners or graduates. The text is written by its own sales team. Murray routinely buys three or four ads a year, Littlechild said, and there's never been a problem before.

Littlechild is upset that the paper's proofreaders didn't notice the slogan on the Murray ad, which can be construed as feeding stereotypes. The paper intends to print an apology next week.

But Littlechild said he's even more upset that the controversy over the ad has rebounded on Murray, who he said has always been very supportive of aboriginal issues.

"This is the last person who would ever, ever deserve this," he said.

"If it was anyone else but her, I might not feel this way. But her of all people, it just kills me."