An escalating conflict in traditional wilderness territory is unfolding in near real time through YouTube, Twitter and Facebook, culminating this week in a July 30 rally in downtown Vancouver. 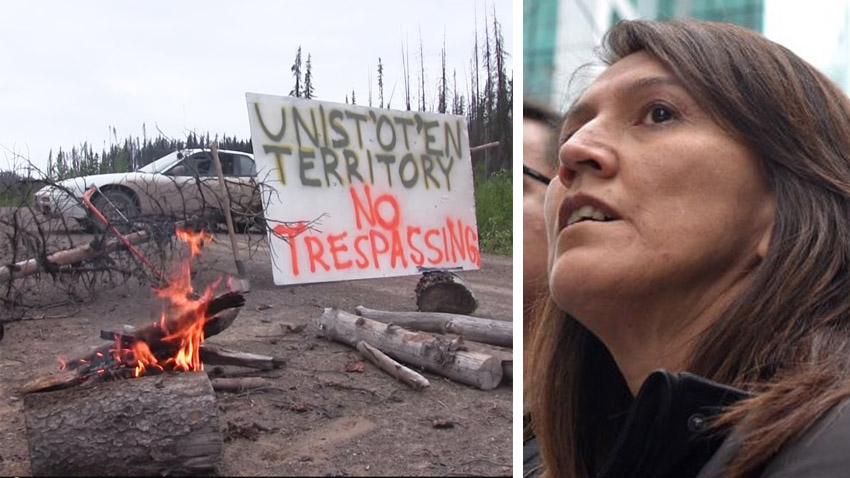 On Thursday Rising Tide held a rally in support for Unist'ot'en camp's continued efforts to turn away RCMP, security contractors and pipeline employees attempting to enter unceded territory in order to  connect fossil fuels to tankers on the West Coast near Prince Rupert.

"This event hopes to confront the police violence brought to people all over the world. This is not an isolated issue," a press release from the Unist'ot'en camp states. "Join us to hear from those who have been to the camp and learn about how powerful life on the land has been."

Freda Huson, spokesperson for the Unist'ot'en clan of the Wet'suwet'en Nation, has maintained a checkpoint at the bridge into her territory for the last six years.

“I am not demonstrating. I am not protesting," she is quoted as saying in the Rising Tide call to action. "I am occupying our traditional homelands.”

Above, a video posted on YouTube by the Unist'ot'en Camp gives a summary of recent events leading up to this week's rally.

The community is calling on the RCMP to hold police officers accountable for the violence they commit against frontline communities such as Unist’ot’en, and on the provincial and federal governments to respect indigenous sovereignty, states Rising Tide.

Speakers include: Vancouver artist/activist Audrey Siegl who recently joined a Greenpeace initiatve to intercept a Shell drilling rig on its way to its Alaska; Harsha Walia, and author of Undoing Border Imperialism; Neelam Khare, an emerging artist, community organizer, film-maker and student who has visited the camp; and Rita Wong, author of three books of poetry who recently visited the Unis'ot'en camp and wrote an article about the Unist'ot'en camp.