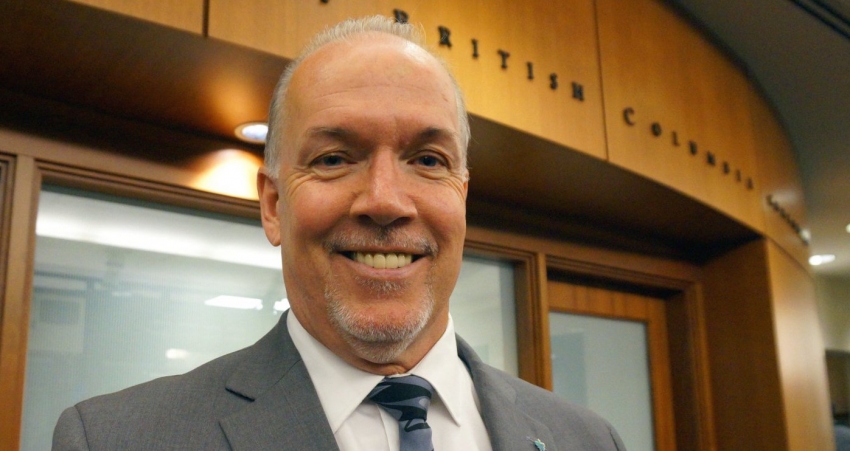 BC NDP Leader John Horgan delivered a speech on climate change at the speaker series, Thinking Big About BC at the Morris J. Wosk Centre for Dialogue at SFU, hosted by the Broadbent Institute, Jan. 23, 2017. Photo by Jenny Uechi.

British Columbia's New Democrats are promising rebate cheques to offset increases in the cost of the province's carbon tax, if the party wins May's election.

NDP Leader John Horgan said Thursday that rebates would start in less than three years to lessen the impact of increases in the carbon tax from $30 per tonne to $50 a tonne.

The rebates are included in the NDP's plan to reduce carbon emissions, create jobs and help families financially, he said.

Horgan said carbon pollution has been rising under Premier Christy Clark's government and Environment Canada forecasts carbon emissions will increase by 32 per cent in B.C. by 2030.

"The fundamental principles are this: we don't want hard-working British Columbians to bear the brunt of these increases when they are working hard to do their level best at their homes and their communities to reduce their footprints," he said at a news conference. "This new climate action rebate plan will ensure 80 per cent of families will have more money in their pockets rather than less when the new increases start in 2020."

Horgan said the NDP had rough estimates but no firm amounts of the proposed rebate cheques.

The NDP climate document says the party would phase in carbon tax increases over three years to meet the federally mandated carbon tax levy of $50 a tonne in 2022. B.C. has had a carbon tax for nine years.

The NDP plan involves raising the tax in increments starting in 2020 to meet the $50 per tonne standard by 2022. Horgan said rebate cheques for the entire year would be issued at the first month of each increase.

Environment Minister Mary Polak said the province hasn't made money from the carbon tax, which is mandated to return every dollar it generates through reductions in other taxes. The government calculates that since 2008, almost $9 billion has been returned in rebates, tax credits or tax cuts, she said.

Polak said Horgan may be premature in announcing his plan to meet the federal target because B.C. won the right to negotiate the way it is achieved at federal-provincial meetings last year.

Green party Leader Andrew Weaver said the Liberals and New Democrats are fighting each other rather than addressing climate change.

"The B.C. Liberals have largely abandoned their climate leadership under Christy Clark, while the NDP are only committing to do the bare minimum that is required by the federal government," he said in a statement.